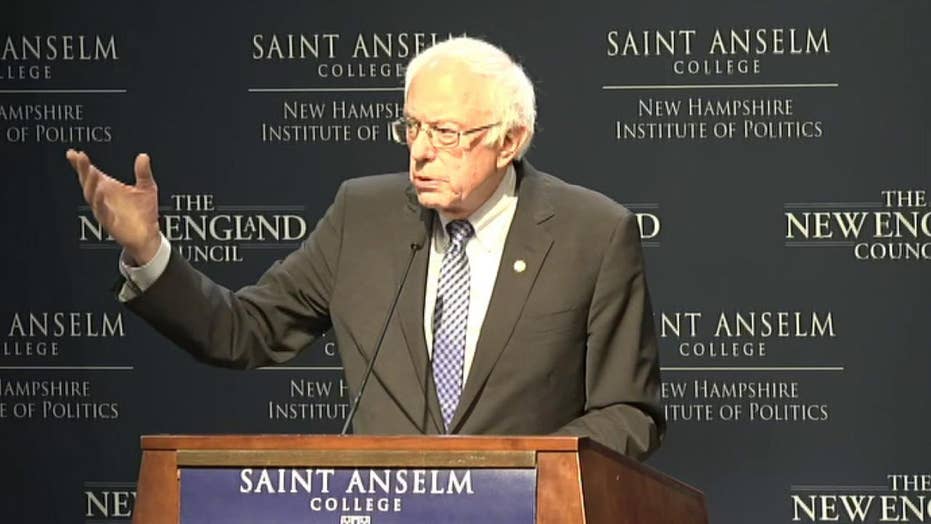 MANCHESTER, N.H. – With his lead shrinking in the latest New Hampshire polls, Sen. Bernie Sanders on Friday for the first time took aim at Democratic presidential nomination rival Pete Buttigieg, whose support in the state has soared this week coming out of Iowa.

The populist senator from Vermont – who tops the Democratic primary race for campaign cash thanks to a massive infusion of small-dollar grassroots donations – criticized the former South Bend, Indiana mayor’s financial support from top-dollar contributors as he headlined the famed ‘Politics and Eggs’ speaking series in the state that holds the first primary in the White House race.

DUELING CLAIMS OF VICTORY IN IOWA BY BOTH BUTTIGIEG, SANDERS

The public donor shaming marked a significant turn in a race that, in the wake of the Iowa caucuses, has abruptly shifted into a battle between the democratic socialist and the ex-mayor who has steadily risen from a dark horse candidate to the top tier. Both candidates have claimed victory in Iowa's disputed contest, and both have momentum going into New Hampshire's primary on Tuesday -- making a clash all but inevitable.

“I like Pete Buttigieg, nice guy. But we are in a moment where billionaires control not only our economy but our political life,” added Sanders, who’s long taken aim at Wall Street and the billionaire class. His campaign literature and signs include the slogan “Paid for by Bernie 2020, not the billionaires.”

Sanders usually refrains from direct attacks on his Democratic nomination rivals, which makes his Friday jabs at Buttigieg even more noteworthy.

This isn’t the first Buttigieg has faced fire over his big-bucks supporters. Sen. Elizabeth Warren of Massachusetts famously criticized Buttigieg at December’s debate for a top-dollar fundraiser at a wine cave.

Buttigieg – in an appearance Thursday night on the ‘Late Show with Stephen Colbert,’ spotlighted that "I'm not a fan of the campaign finance system we have today.”

And he pledged that “I will make exactly one promise to anybody, whether they're giving three bucks online or the maximum allowable by law, and the promise is I'm going to take that contribution and I'm going to use it to build the campaign that's going to defeat Donald Trump so that we can actually get the reforms that this country needs."

The 38-year old Buttigieg – who’s four decades younger than Sanders – has soared in the latest polls in New Hampshire, which holds the first primary in the White House race. He stands at 23 percent in the latest Suffolk University/WBZ-TV/Boston Globe daily tracking poll of likely Democratic primary voters in New Hampshire, just 1 percentage point behind Sanders. Buttigieg’s surged 8 points in the past two nights, while Sanders' support is virtually unchanged.

BUTTIGIEG CATCHES UP TO SANDERS IN LATEST POLL IN NH

Both candidates have declared victory in Monday’s Iowa caucuses, with Sanders spotlighting his lead in the raw vote totals and Buttigieg highlighting his slight edge in state delegate equivalents.

The results in Iowa – delayed after a technical debacle – have been trickling out all week.