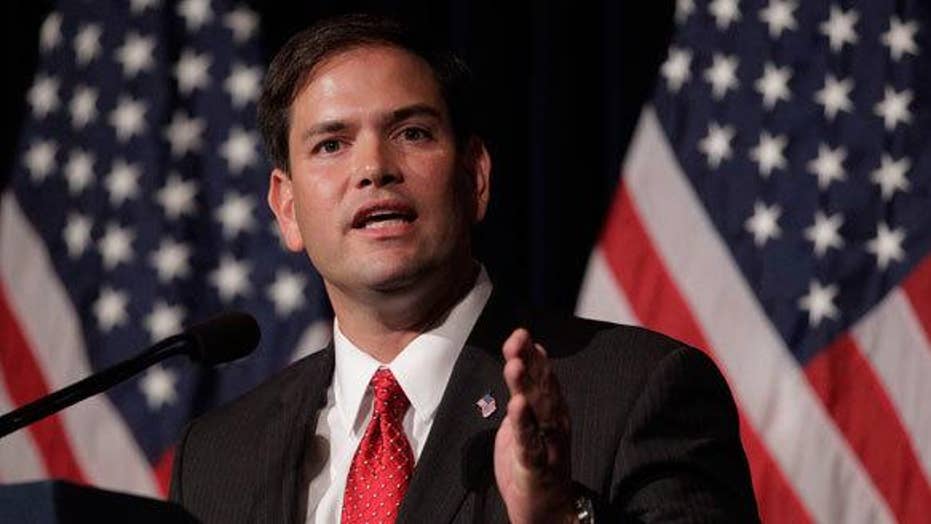 Peter Doocy has the latest on the tax bill.

President Trump on Friday predicted Congress would pass a sweeping bill to reform the country’s tax system next week, as several Republican holdouts said they would back the overhaul.

Tennessee Sen. Bob Corker, the only Republican to vote against the original version of the tax bill passed by the Senate, and Florida Sen. Marco Rubio, who has expressed concerns over the size of a child tax credit, both said Friday they would vote for the final tax bill.

The House and Senate have passed separate tax bills, but they have been working to come up with a final $1.5 trillion GOP tax reform legislation. Final votes are likely in both chambers next week.

As he departed the White House on Friday for a speech at the FBI academy, Trump told reporters he has seen the details of the final version and is confident Republicans will get behind it.

“I have seen it,” he said. “I think it's going to do very, very well. I think that we are going to be in a position to pass something as early as next week, which will be monumental.”

Rep. Kevin Brady, R-Texas, the chairman of the House Ways and Means Committee, told reporters he expects the text of the bill to be posted at 5:30 p.m. EST on Friday when the House convenes.

“After many conversations over the past several days with individuals from both sides of the aisle across Tennessee and around the country—including business owners, farmers, chambers of commerce and economic development leaders—I have decided to support the tax reform package we will vote on next week," Corker said in a statement.

Rubio is expected to be a yes according to sources. He celebrated the "progress made on the Child Tax Credit" in a tweet Friday.

Meanwhile, three Republican senators, Arizona’s Jeff Flake, Utah’s Mike Lee and Maine’s Susan Collins have said they want to read the bill before saying whether they will support it.

Two other Republicans have missed votes this week due to illness.

John McCain of Arizona, who is 81, is at a Washington-area military hospital being treated for side effects of brain cancer treatment, and 80-year-old Thad Cochran of Mississippi had a non-melanoma lesion removed from his nose earlier this week. GOP leaders are hopeful they will be available next week.

“Of course we all wish for Sen. McCain to have a great health for as long as possible,” Sen. Rob Portman, R-Ohio, said on Fox News on Friday. “My sense is that everybody's made a commitment to be there next week. And we will certainly be able to have the vote. Our prayers go to him and his family.”

Cochran's office told Fox News that the senator “is in Washington and expects to vote for the tax plan when it comes to the Senate next week.”

Republicans, with a 52-48 majority in the Senate, can only afford to lose two votes in the Senate. Vice President Mike Pence would have to break a tie if required.

Rubio and Lee had both indicated in recent days they would not support the final tax bill unless a larger child tax credit was included.

Conn Carroll, a spokesman for Lee, said the senator was  "undecided" on the bill in its current form.

Rubio and Lee have advocated for a $3,000 tax credit per child in the bill.

On Friday, Trump expressed optimism he could win over Rubio and Lee.

Senior congressional aides told Fox News late Thursday that the final bill leaves in place a deduction for the interest on student loans and would not start taxing graduate school tuition waivers.

Brady also confirmed Thursday that the final legislation would reduce the top tax rate to 37 percent from 39.6 percent.

The final package slashes the corporate rate from 35 percent to 21 percent. The initial Senate and House bills had set it at 20 percent.