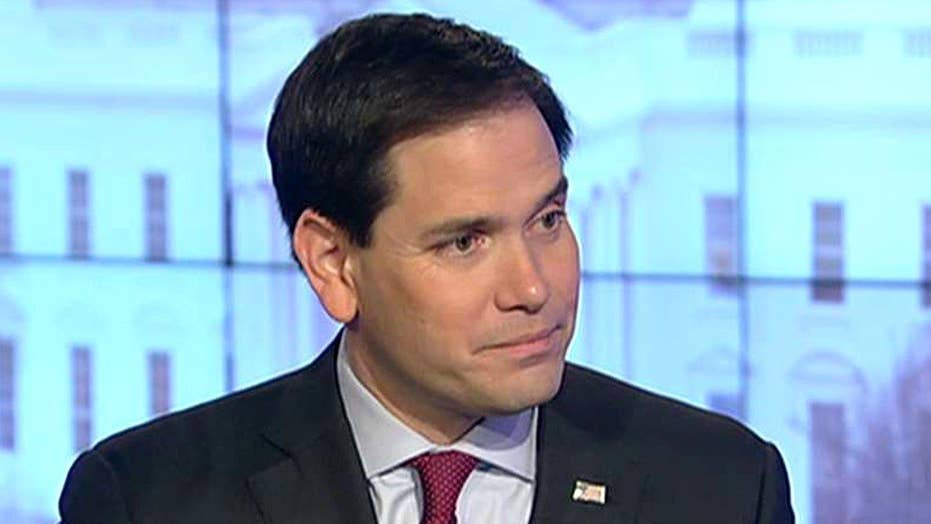 On 'America's Newsroom,' Republican presidential candidate says there is 'now a price on the head of every American abroad' because the president 'will make trades with enemies'

GOP presidential candidate Marco Rubio said Sunday that his recent endorsement from Iowa’s biggest newspaper proves he has momentum and is an “affirmation that his campaign is serious,” just days before the state holds the first primary in the White House race.

“It’s an affirmation that our campaign is a serious campaign about solving serious problems,” the Florida senator told “Fox News Sunday.”

Rubio trails overall GOP front-runner Donald Trump and Texas Sen. Ted Cruz, who has a three-point lead in Iowa, according to the RealClearPolitics polls average.

“I’m happy to have the endorsement,” Rubio said Sunday, pointing out that Iowa caucus-goers traditionally don’t decide on a candidate until the final days.

“Rubio has the potential to chart a new direction for the party, and perhaps the nation, with his message of restoring the American Dream,” the paper’s editorial board wrote. “We endorse him because he represents his party’s best hope.”

Rubio also argued Sunday that being a primary target in ads sponsored by the so-called Republican establishment further proves his campaign has momentum and that he is not part of insider Washington.

“You only attack somebody if you think they are a threat,” he said.

Rubio also said that when he announced his 2010 Senate bid, the Republican establishment told him, “It’s not your turn.”

He also disagreed with the argument that his campaign changing its plan on TV ads, from 60-second to 30-second spots in early primary states, suggests his campaign is struggling.

Rubio said the move was “strategic,” which included negotiating for cheaper rates, and based on “redeploying” resources for the length of the campaign.