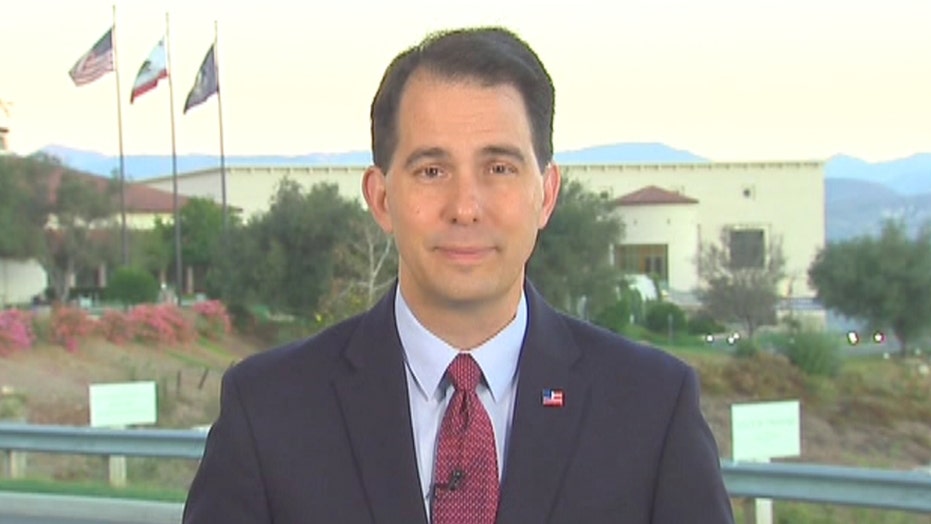 Donald Trump once again found himself the lightning rod of the Republican presidential race Wednesday, as he tangled with a debate stage full of rivals trying to position themselves as the best alternative to the GOP front-runner.

The second Republican primary debate veered into serious policy territory – covering everything from Iran to Russia to Planned Parenthood to immigration. But, at times to the visible frustration of candidates trying to stick to those issues, few segments passed without a sparring session between Trump and one of his opponents. Almost every time, Trump hit back – and it was unclear whether any candidate would be able to dent his front-runner status.

The candidate perhaps most eager to knock the billionaire businessman down a peg was former Florida Gov. Jeb Bush, who lost his lead to Trump over the summer. Repeatedly, Bush challenged Trump on his record and past comments.

He told Trump to apologize to his wife for suggesting her being from Mexico makes Bush more sympathetic to Mexicans – Trump refused.

He accused Trump of once giving him money as he sought casino gambling, unsuccessfully, in Florida.

Trump denied it, and when Bush criticized Trump for bragging about demanding Hillary Clinton attend his wedding, Trump teased him, saying: “More energy tonight, I like that.” (Bush answered back at the end of the debate – asked what his Secret Service codename would be, Bush said, “Very High Energy, Donald,” and the two shared a high-five.)

“It was such a disaster those last few months that Abraham Lincoln couldn’t have been elected,” Trump said.

Some of the most heated exchanges at the CNN debate also came between Trump and former HP CEO Carly Fiorina, both business leaders.

After Trump called her former company a “disaster,” she cited his repeated bankruptcy filings and questioned why America should trust him to manage its finances.

New Jersey Gov. Chris Christie interjected and said middle-class Americans “could care less about your careers.” He told the two to “stop this childish back and forth.”

Fiorina also got her chance at the debate to respond to Trump’s controversial jab at her, where in a magazine article he said: “Look at that face – would anyone vote for that?”

Asked to respond, she said, “I think women all over this country heard very clearly what Mr. Trump said.”

Despite all the attention on Trump, his dominant lead in the polls means his rivals may be battling at this stage for runner-up, for now.

Retired neurosurgeon Ben Carson currently holds that status after vaulting into second place in the polls – yet was able to avoid the fray for most of Wednesday’s debate.

He took one light-hearted jab at Trump, after Trump discussed his views on vaccines and said there are cases of children getting sick – and having autism – after getting them.

Asked about Trump’s medical opinion, Carson said, “He’s an okay doctor” – in reference to a comment Trump recently made about him. Carson went on to say there’s no documented association between autism and vaccines, but doctors are probably giving too many vaccines in a short period of time.

After the exchange about George W. Bush, Carson also noted that he did not want Bush to “go to war” in Iraq. He added that radical jihadists now are an “existential threat to our nation” and leaders can’t “put our heads in the sand.”

Aside from the sparring with Trump, the candidates did have a chance to stake out their positions on a range of policy issues.

Fiorina, in an impassioned moment in the debate, appealed to Congress to defund Planned Parenthood following videos exposing organ harvesting from aborted fetuses.

“This is about the character of our nation. And if we will not stand up and force President Obama to veto this bill, shame on us,” she said.

Former Arkansas Gov. Mike Huckabee slammed a federal judge for temporarily jailing Kentucky clerk Kim Davis, saying the U.S. has made religious “accommodations” for Guantanamo detainees and the Fort Hood shooter, but Davis is facing a “criminalization of her faith.”

And Texas Sen. Ted Cruz said of the agreement with Tehran, “I will rip to shreds this catastrophic Iranian nuclear deal.”

On this, Rubio challenged Trump’s global affairs knowledge. Trump vowed, “I will know more about the problems of this world” as president. And he criticized Rubio for missing votes.

Trump’s fitness to be commander-in-chief was a common theme for his rivals.

Fiorina said, when asked if she’s comfortable with Trump controlling America’s nuclear weapons: “I think Mr. Trump is a wonderful entertainer.” She said “judgment” and “temperament” will be revealed “over time and under pressure” in the race.

Trump answered: “I may be an entertainer. … but I will tell you this. What I am far and away greater than an entertainer is a businessman.”

Trump also went after Sen. Rand Paul, saying he shouldn’t even be on the stage.

“There’s a sophomoric quality that is entertaining about Mr. Trump,” Paul answered, but he added he’s concerned about him being in charge of nuclear weapons. Paul chastised Trump for his “visceral response,” including attacking people on their appearance which he likened to “junior high.”

Trump said he never did that to Paul, quipping: “Believe me there’s plenty of subject matter right there.”

Wisconsin Gov. Scott Walker also zinged Trump, saying: “We don’t need an apprentice in the White House. We have one right now.”

Walker and Bush have both seen their polling numbers drop in recent weeks as Trump, and now Carson, have risen. Walker is trying to refocus his campaign on his record as governor, and record battling labor unions; the latter issue did not surface much during Wednesday’s debate, though. In his closing remarks, Walked vowed that as a leader, “I won’t back down any day, any way, anyhow.”

An unexpected clash also broke out at the end, when Paul made a veiled reference to Bush having smoked marijuana years ago as Paul challenged federal marijuana policy.

Bush acknowledged Paul was talking about him and said: “40 years ago, I smoked marijuana, and I admit it.”

Paul then claimed people with “privilege” don’t go to jail for marijuana, but others do.

Fiorina, while rising in the polls, is still averaging just over 3 percent nationally, according to RealClearPolitics. Bush, once the front-runner, is at about 8 percent. Walker is down to 3 percent. Cruz and Rubio remain in the middle of the pack, trailing slightly behind Bush.

But with Carson and Trump attracting the support of roughly half of primary voters, the other 14 candidates are fighting for relative scraps. Trump’s national lead now tops 30 percent.

At the earlier undercard debate, Sen. Lindsey Graham, R-S.C., tangled often with his GOP rivals, positioning himself as an experienced, practical lawmaker not beholden to conservative activist causes. He focused squarely on the need to defeat radical Islamic terrorists, while Louisiana Gov. Bobby Jindal focused at that debate on religious freedom issues.