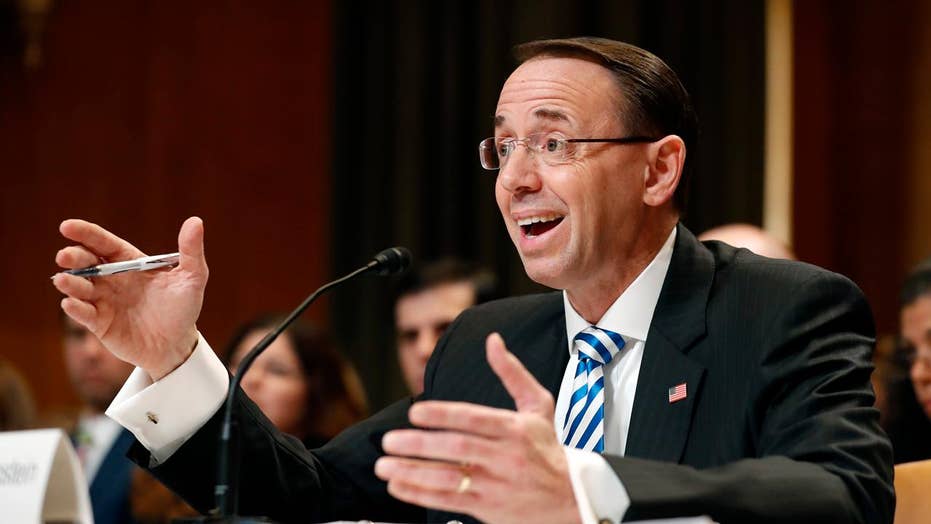 Deputy attorney general testifies before the Senate on the special counsel

Deputy Attorney General Rod Rosenstein offered assurances to lawmakers on Tuesday that special counsel Robert Mueller has “full independence” from the Department of Justice to conduct his investigation into Russian meddling in the 2016 presidential election and ties to members of the Trump campaign.

Rosenstein testified before a Senate budget panel in place of Attorney General Jeff Sessions, who was testifying instead to the Senate Intelligence Committee Tuesday afternoon on the Russia case.

The deputy AG was pressed by senators about Mueller's independence after a Trump friend claimed the president was considering firing him. Sen. Jeanne Shaheen, D-N.H., asked Rosenstein whether he has seen evidence for “good cause” to remove Mueller, whom he appointed last month.

“No, I have not,” Rosenstein answered. “I am confident he will have sufficient independence.”

Rosenstein acknowledged he has the authority to fire Mueller, as Sessions recused himself from the Russia case.

Sen. Chris Van Hollen, D-Md., pressed Rosenstein to define “good cause,” and asked if an order from the president would be considered such.

“Doesn’t matter who it comes from,” Rosenstein responded. “I anticipate people will follow the rules, if they don’t, we have a lot of officials who would make the decision if it arises, but hopefully would not arise.”

Rosenstein added: “As long as I’m in this position, he will not be fired if not for good cause.”

Sen. Joe Manchin, D-W.Va., asked Rosenstein if he could be “terminated without cause,” to which Rosenstein responded “yes.”

“So that’s a possibility,” Manchin said, seemingly insinuating that Trump could fire Rosenstein “without cause.”

“Anything is possible, senator,” Rosenstein said.

But Sen. James Lankford, R-Okla., asked Rosenstein if there was a “secret plan” to remove Mueller, as he read in news reports.

“There is no secret plan that involves me, no senator,” Rosenstein said.

The questions regarding Mueller’s status stem from a Monday interview on PBS' "NewsHour" with Christopher Ruddy, a close friend of Trump and founder of Newsmax Media. Ruddy said that the president was “considering perhaps terminating” Mueller. Ruddy told Fox News that he was “confident” in his sourcing, and that the president was “definitely considering it as an option.”

But a source close to the Trump legal team told Fox News on Tuesday that Ruddy’s statement came from watching another Trump lawyer, Jay Sekulow, discuss the Mueller probe on ABC’s “This Week” -- where Sekulow did not directly suggest the prospect of Mueller’s firing.

Late Tuesday, White House spokeswoman Sarah Huckabee Sanders told reporters that "while the president has the right" to fire Mueller, Trump "has no intention to do so."

Sen. Dianne Feinstein, D-Calif., asked Rosenstein if it was “fair” to put the assumption that Mueller is being fired “to rest.”

“Yes, as far as I’m concerned,” Rosenstein said. “I appointed him, I am going to defend the integrity of that investigation.”

Lawmakers on the panel were not pleased that Sessions canceled his appearance, and peppered Rosenstein with some of the same questions they planned to ask the attorney general regarding his recusal from the Russia investigation.

“You’re not the witness who should be behind that table,” Sen. Patrick Leahy, D-Vt., said at the beginning of the hearing.

Sessions recused himself from the Russia investigation in March.

Rosenstein avoided answering “hypothetical questions” posed by lawmakers on the panel, but said that he had “confidence” that Mueller would “do the right thing and defend the integrity of the investigation.”

Feinstein asked Rosenstein for a timeline for the Russia investigation. He said he did not have one, saying “lots of factors” prove it “very difficult to predict.”