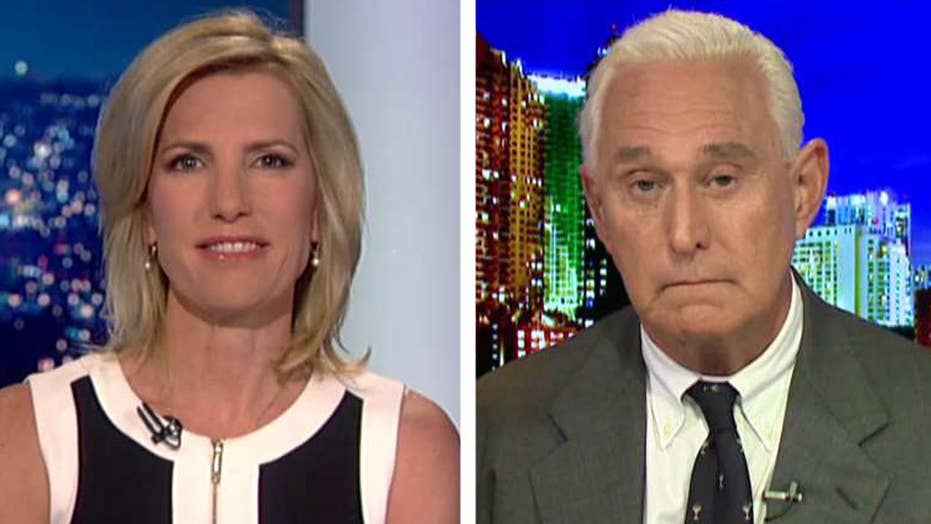 Strategist Roger Stone responds to Atlantic's report about his relationship with WikiLeaks and discusses the Russia investigation on 'The Ingraham Angle.'

Special Counsel Robert Mueller is investigating an Aug. 2016 email by former Trump adviser and political consultant Roger Stone in which he purportedly claimed to have "dined with" the founder of WikiLeaks, according to a report.

The secretive organization released a trove of hacked communications prior to the 2016 presidential election, including Democratic National Committee emails that damaged then-candidate Hillary Clinton's campaign.

Stone emailed fellow Trump aide Sam Nunberg on Aug. 4 that he “dined with Julian Assange last night,” according to The Wall Street Journal.

The next day, Stone tweeted: “Hillary lies about Russian Involvement in DNC hack -Julian Assange is a hero.”

"The idea that I would meet with Assange undetected is ridiculous on its face."

But Stone insists his emailed comment was nothing more than a flippant attempt to wrap up an unwanted conversation, and that despite his intimations, he has never had ties to WikiLeaks.

“I never dined with Assange,” Stone told The Journal. "There was no such meeting. It’s not what you say, it’s what you do. This was said in jest.”

DONALD TRUMP JR. RELEASES MESSAGES FROM WIKILEAKS FROM BEFORE 2016 ELECTION

Stone also provided The Journal with a screenshot of a booking for someone named "Roger" flying out of Los Angeles on a Delta flight heading to Miami the evening of Aug. 3, and airline confirmed that the screenshot matched a real flight -- but, citing consumer privacy rules, could not state definitively whether Stone was on board.

WikiLeaks has reportedly tweeted that Stone and Assange, who has called the Ecuadoran Embassy in London home since 2012, "never communicated."

The Post has previously reported that two associates of Stone claim he told them he had made contact with Assange, and other outlets have found video apparently showing Stone referencing meetings with Assange.

“I wish him no ill will, but Sam [Nunberg] can manically and persistently call you,” Stone told the Post. “I said, ‘I think I will go to London for the weekend and meet with Julian Assange.’ It was a joke, a throwaway line to get him off the phone. The idea that I would meet with Assange undetected is ridiculous on its face.’ ’’

In February, Stone told Fox News' Laura Ingraham that the media and Democratic operatives were attempting to "re-inflate the deflated Russian collusion delusion" by using underhanded tactics to tie President Trump to the WikiLeaks hacks.