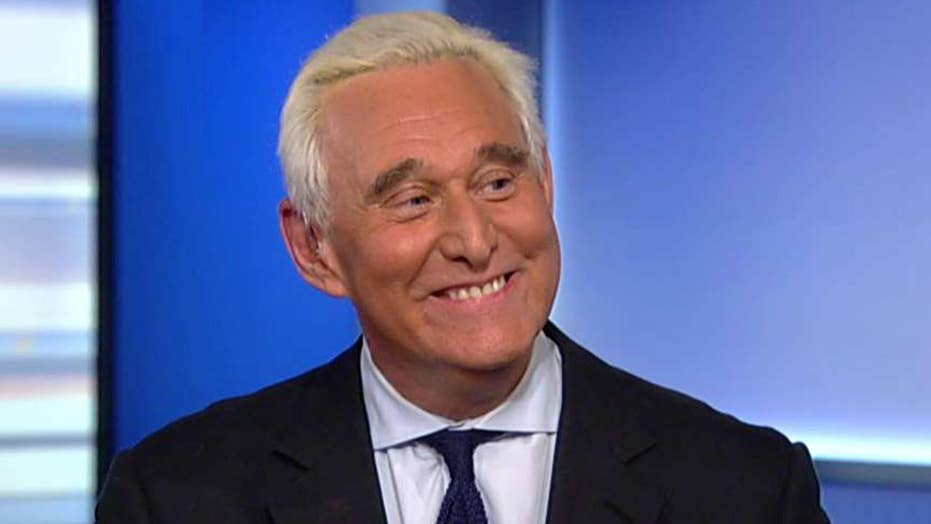 Former Trump aide Roger Stone speaks out after being arraigned on 'The Ingraham Angle.'

Roger Stone, the longtime adviser to President Trump, called last week's raid at his Fort Lauderdale home "over-the-top," saying Tuesday that the FBI sent more men there than were used to "protect our compound in Benghazi."

Stone, who earlier pleaded not guilty to felony charges in connection with Special Counsel Robert Mueller's Russia investigation, was referencing the Sept. 11, 2012, attack on U.S. government facilities in Benghazi, Libya, that resulted in the deaths of Ambassador Chris Stevens and three others.

Stone remained defiant Tuesday night and recalled wearing a T-shirt that read, “Roger Stone Did Nothing Wrong,” while he was arrested Friday. He is accused of lying to lawmakers, engaging in witness tampering and obstructing a congressional investigation.

TUCKER CARLSON: ROGER STONE RAID SHOWS THAT CNN IS NO LONGER COVERING ROBERT MUELLER. THEY'RE WORKING WITH HIM

He appeared on "The Ingraham Angle" and challenged the claim that he inquired about contacting WikiLeaks in October 2016 to release the emails of Hillary Clinton campaign manager John Podesta to coincide with the release of the notorious "Access Hollywood" tape of Donald Trump and TV host Billy Bush.

Jerome Corsi, the conservative author, was reportedly referred to in the Stone indictment as Person 1 and Stone allegedly sought to use him as a link to WikiLeaks, according to Reuters.

Corsi has said he has nothing to do with WikiLeaks or its founder, Julian Assange.

The indictment does not accuse Stone of coordinating with Russia or with WikiLeaks on the release of hacked Democratic emails. But it does allege that he misled lawmakers about his pursuit of those communications and interest in them.

Corsi said he’d be happy to testify at Stone’s trial and added in a recent interview that Stone better be prepared for Mueller’s team, which has spent "endless resources" in the Russia collusion investigation.

"Roger should go in there with the full understanding that he will not be able to dodge the evidence that I’m sure Mueller has," Corsi said in an interview.

Stone said Corsi has been wrong before and claims to have text messages and emails that prove his case.