Longtime Democrat leader campaigning to keep top role as new faces arrive in D.C. to prepare for the next Congress.

The revolt inside the Democratic Party against Nancy Pelosi's return to the House speakership is gaining momentum with a growing number of Democrats signing a letter pledging not to support the California Democrat for speaker.

Fox News has confirmed at least 17 House Democrats, including incumbents and incoming members, have signed on to a document saying they will not support Pelosi on the House floor for speaker. A Democrat familiar with the effort says they are trying to add more names before the letter is publicly released.

If all those Democrats vote against Pelosi on the floor, Pelosi would not have the votes for speaker. To get the gavel, Pelosi will first need to pick up a majority of the Democratic Caucus in internal leadership elections, then go on to win an absolute majority of the House.

“It’s who blinks first," another senior House Democratic lawmaker said. "Is it Nancy or is it the caucus?”

Still, even as these Democrats try to convince Pelosi she doesn't have enough support to win, no Democrat has stepped forward yet to challenge her.

But on Wednesday, Rep. Marcia Fudge, a Democrat from Ohio, said she is contemplating running for speaker.

"People are asking me to do it, and I am thinking about it," Fudge told a local news outlet. "I need to give it some thought and see if I have an interest. I am at the very beginning of this process. It is just in discussion at this point."

During a Capitol Hill press conference on Thursday, Pelosi simply replied “yes” when asked if she would have the votes if the election were today. Asked about a potential challenge from Fudge, Pelosi replied, “Come on in. The water’s warm.”

“Congress needs a new leader. Period,” Moulton said. “I’m hoping Marcia Fudge, my first (and arguably best) mentor in Congress, will run for the next Speaker of the House. I have full faith in her ability to lead our new Congress to its fullest potential.”

In recent days, allies of Pelosi have been working to stop a Democratic rebellion from taking place.

In a Monday letter to fellow Democrats, Maryland Rep. Elijah Cummings pressured Democrats to vote for Pelosi, saying, “I understand that some of our newly-elected members said during their campaigns they would oppose Leader Pelosi.”

Cummings said Democrats must unify behind the party’s choice.

“After we, as Democrats, make our selection, our new members should not be pressured into voting against our party’s nominee on the House floor in January — when the choice will be between the Democratic candidate and the Republican candidate,” Cummings wrote. “That will only play into the hands of House Republicans and President Trump.” 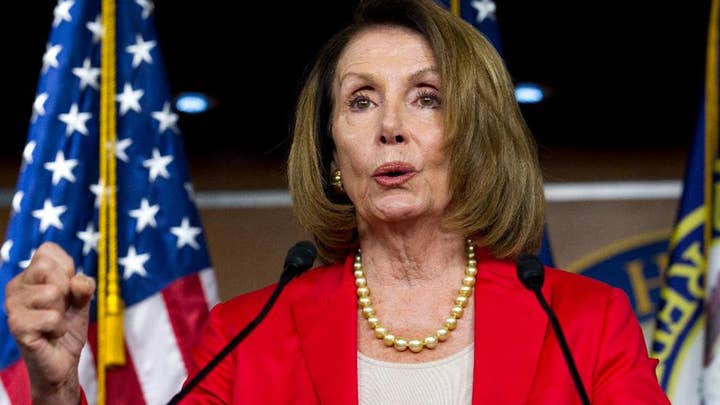 Democrats plan to meet behind closed doors to select their nominee for speaker later this month. But the official election for speaker takes place in January, when the entire House of Representatives votes.

After arriving in Washington on Tuesday, several Democrats suggested it will be hard for them to support Pelosi for speaker.

Rep.-elect Kendra Horn, D-Okla., who unexpectedly defeated GOP Rep. Steve Russell in a seat which had been Republican for years, told Fox News she will vote for “what’s best for Oklahoma” and said supporting Pelosi would be “challenging” in her state.

Reps.-elect Abigail Spanberger, D-Va., and Joe Neguse, D-Colo., indicated they are undecided regarding who they will support.

Politico reported that Pelosi and her allies are arguing that it’s important for a woman to be elected speaker.

“I think it would look ridiculous if we win back the House … we have a pink wave with women who have brought back the House, then you’re going to not elect the leader who led the way? No,” Florida Rep. Lois Frankel told Politico. “That would be wrong.”

Republicans, certainly, see a Pelosi speakership as beneficial to them. President Trump last week said that Republicans would help Pelosi if she didn’t have enough support from Democrats. It is unclear whether the president was being sincere.

“If they give her a hard time, perhaps we will add some Republican votes. She has earned this great honor!” he tweeted.

Pelosi was speaker between 2007-11, but in 2016 she fended off a leadership challenge from Rep. Tim Ryan, D-Ohio. During a recent appearance on Fox News’ “Cavuto,” Ryan said, “I don’t think this is a done deal yet” in terms of Pelosi becoming speaker again. Ryan also says he “hopes somebody does” challenge Pelosi.

“We’re getting a lot of phone calls and a lot of us are talking, I think it’s important,” he said. “As I said, I don’t have any intention of doing this at this point.”