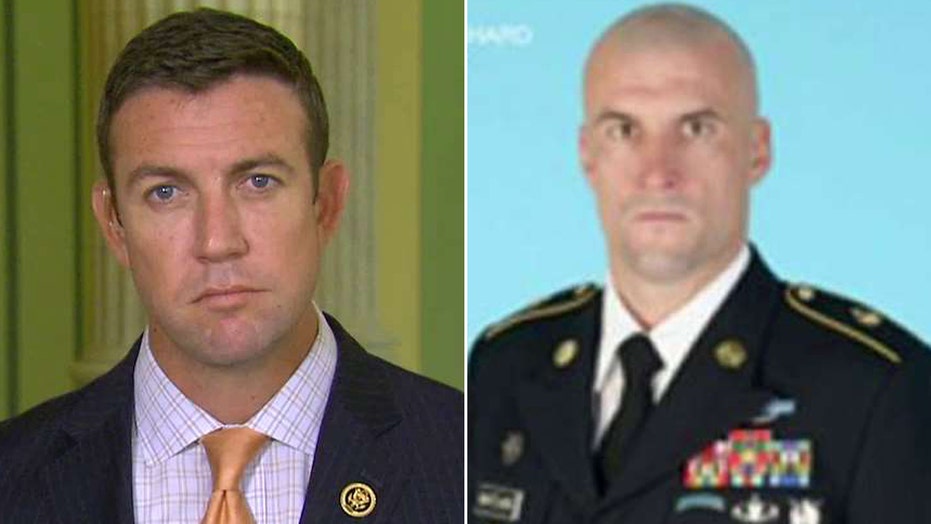 Rep. Hunter comes to defense of soldier kicked out of Army for shoving accused Afghan rapist

Two Republican congressmen introduced a resolution on Wednesday calling for the reinstatement of a Green Beret who confronted an accused child rapist in Afghanistan and has since been ordered discharged by the Army.

Sgt. 1st Class Charles Martland is fighting the Army’s order to have him discharged by Nov. 1.

Lending support to his effort, Reps. Duncan Hunter, R-Calif., and Vern Buchanan, R-Fla., introduced their measure. While the resolution is non-binding, the lawmakers said in a press release it would “send a strong message to the Pentagon.”

“Driving Sgt. Martland out of the Army for standing up for American values is a national disgrace,” Buchanan said in a statement Wednesday.

Hunter added, “Sgt. Martland should be commended and reinstated.”

The confrontation in question occurred in 2011. Martland and team leader Capt. Daniel Quinn confronted a local police commander after a boy said he was raped by him. According to their accounts, they shoved him and threw him after he admitted to the crime but laughed it off.

Martland provided a statement on his case earlier this week. The statement was requested by Hunter, who intends to submit it to the House Armed Services Committee.

In the statement, Martland said he body-slammed and threw the local commander, “but did not kick or punch him in the face.”

He argued that the boy’s safety, as well as American lives, was at stake – as many locals were worried local forces were becoming “worse than the Taliban,” and locals could threaten U.S. forces if they returned to the Taliban fold. He said he had a “moral obligation” to act.

“Kicking me out of the Army is morally wrong and the entire country knows it,” he said.

Martland and Quinn, who is no longer in the military, also won support Wednesday from the Veterans of Foreign Wars.

National Commander John A. Biedrzycki said in the statement that they “did the absolute right thing to confront a threat, and for the Army to show them the door so abruptly is no way to take care of the troops who have faithfully taken care of the mission for so long."