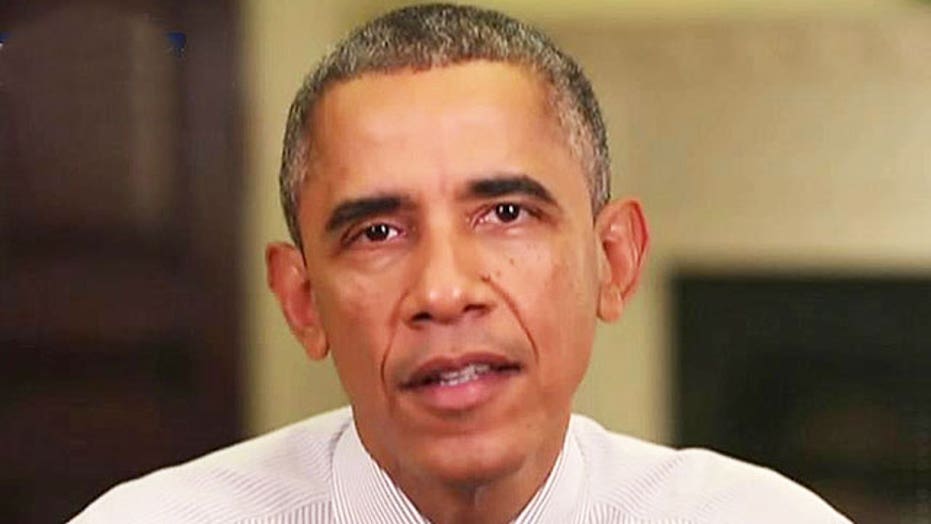 President Obama drew a sharp rebuke from senior Republicans on Capitol Hill for pushing broad regulation of Internet broadband service, with lawmakers warning that such a move would imperil the “thriving Internet economy and the American jobs it creates.”

The president touched off the battle after issuing a lengthy statement on Monday on so-called “net neutrality.” Staking out his position, the president called on the Federal Communications Commission to more heavily regulate Internet providers and treat broadband much as it would any other public utility.

He said the FCC should explicitly prohibit Internet providers like Verizon and AT&T from charging companies like Netflix extra to move their content more quickly. In doing so, he sided with consumer activists who long have warned against the creation of Internet “fast lanes” that prioritize service for some, and not others.

Cable companies and Internet providers blasted the president for wading into the debate. But the issue for Republicans was more the president’s call to treat broadband like a public utility.

House GOP Whip Steve Scalise, R-La., warned this would have a “chilling effect” on the Internet.

The “attempt by the president to have the FCC reclassify broadband Internet as a public utility is yet another example of the Obama administration’s radical effort to have the government take over more aspects of our economy where there is no justification,” he said in a statement.

The president was siding with Internet activists who say the FCC should reclassify the Internet as a public utility under Title II of the 1934 Communications Act to ensure it has enough power to regulate the Internet effectively. That would mean the Internet would be regulated more heavily in the way phone service is.

That's exactly what industry doesn't want to happen. Industry officials say they are committed to an open Internet in general, but want flexibility to think up new ways to package and sell Internet services.

Republicans said regulating the Internet in this way would give too much power to the government.

He said “time-tested antitrust laws” would be the better way to address the contentious issue of net neutrality.

"Net neutrality" is the idea that Internet service providers shouldn't block, slow or manipulate data moving across its networks. As long as content isn't against the law, such as child pornography or pirated music, a file or video posted on one site will load generally at the same speed as a similarly sized file or video on another site.

In 2010, the FCC embraced the concept in a rule. But last January, a federal appeals court struck down the regulation because the court said the FCC didn't technically have the legal authority to tell broadband providers how to manage their networks.

The uncertainty has prompted the public to file some 3.7 million comments with the FCC -- more than double the number filed after Janet Jackson's infamous wardrobe malfunction at the 2004 Super Bowl.

On Monday, Obama waded into the fray and gave a major boost to Internet activists by saying the FCC should explicitly ban any "paid prioritization" on the Internet.

"It is common sense that the same philosophy should guide any service that is based on the transmission of information -- whether a phone call, or a packet of data," Obama said.

Consumer groups and content providers hailed Obama's move, with Netflix posting to its Facebook page that "consumers should pick winners and losers on the Internet, not broadband gatekeepers."

White House spokesman Josh Earnest, traveling with Obama in China, said the president "felt this was an appropriate time" to make his views known because of the FCC's regulatory timeline, and that the timing wasn't related to Obama's trip this week to Asia and Australia.

"There are members of Congress on both sides of this," he added.

Several GOP leaders ripped the president's statement, though. House Energy and Commerce Committee Chairman Fred Upton, R-Mich., and others issued a joint statement saying the move threatens the Internet economy "and the American jobs it creates" -- they added, "the Internet isn't a utility, so we shouldn't treat it as one."

FCC Chairman Tom Wheeler, a former industry lobbyist and venture capitalist, has said he is open to using a "hybrid" approach that would draw from both Title II of the 1934 law and the 1996 Telecommunications Act. On Monday, Wheeler said he welcomed the president's comments, but suggested that his proposal was easier said than done.

"The more deeply we examined the issues around the various legal options, the more it has become plain that there is more work to do," Wheeler said. "The reclassification and hybrid approaches before us raise substantive legal questions. We found we would need more time to examine these to ensure that whatever approach is taken, it can withstand any legal challenges it may face."

The FCC isn't under a deadline to make a decision.