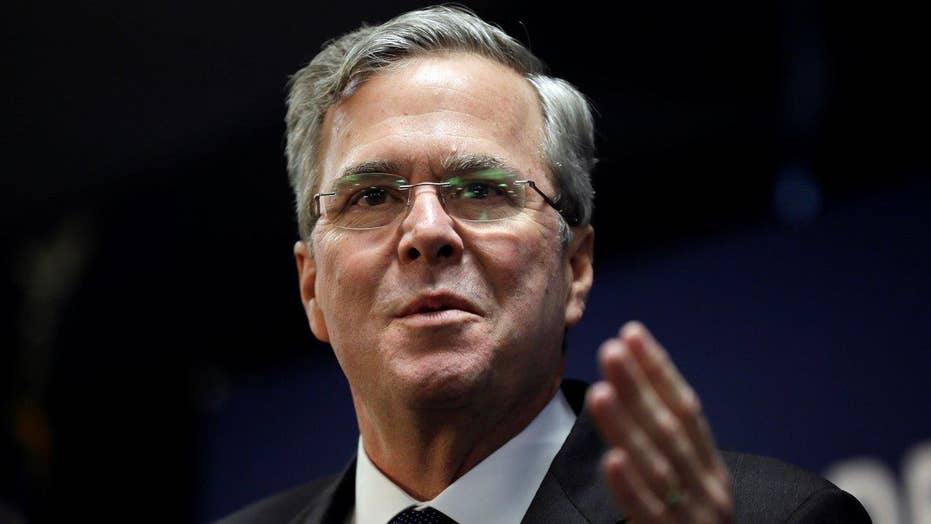 If there’s one message the Republican presidential candidates not named Donald Trump aimed to get across at the final debate before Iowa’s caucuses, it was this: 50 states still have to vote, and a lot could change when they do.

The GOP contenders are barnstorming the Hawkeye State Friday on the heels of the Fox News/Google debate, where Trump’s absence put a spotlight on candidates like Ted Cruz and Marco Rubio – but also gave the race’s underdogs a chance to engage on the issues, and even capture airtime that eluded them when the front-runner was onstage.

Bush and Kentucky Sen. Rand Paul, in particular, were getting high marks Friday from analysts. The former Florida governor was seen as having one of his best debate performances of the campaign -- including pointed criticism of his former protégé Rubio -- perhaps benefiting from not having to worry about Trump belittling his every comment. And Paul, after missing the cut in the last debate, returned to the main stage with a firm critique of his rivals’ alleged inconsistencies on immigration, surveillance and more.

In Iowa, those candidates may simply be too far behind in the polls for a strong debate showing to make much difference.

But the night helped show that few candidates are conceding anything to front-runner Trump, or the other two top-polling candidates, Cruz and Rubio.

Asked Friday if he changed any minds at the debate, Bush said, “I hope so.”

“We had a substantive debate,” Bush said.

New Jersey Gov. Chris Christie, too, played the role Thursday of disenchanted Washington outsider, scolding the Florida and Texas senators after an immigration spat and quipping that he needed a Washington “dictionary” to decipher what they were saying.

"This is why you need to send someone outside of Washington to Washington," Christie said. "Stop the Washington bull and let's get things done."

With Trump out of the picture – boycotting the debate over complaints about Fox News, instead hosting a veterans event nearby – Cruz absorbed much of the criticism from the other GOP candidates.

He and Rubio tangled the most, as Rubio tries to make up ground against Cruz in both Iowa and New Hampshire.

In their most heated exchange, Rubio accused Cruz of falsely describing himself as the most conservative candidate, and changing his position on immigration.

“This is the lie that Ted’s campaign is built on,” the Florida senator said. “Throughout this campaign, you’ve been willing to say and do anything in order to get votes.”

He said Cruz used to talk about bringing immigrants out of the shadows, and, “now, you want to trump Trump on immigration.”

The Texas senator flipped the allegation, saying it is Rubio who vowed to fight against “amnesty” and then reversed course for political expediency.

“I like Marco, he’s very charming, he’s very smooth,” Cruz said, before accusing him of siding with donors in the immigration debate.

Bush later sparred as well with Rubio on immigration. Bush said Rubio sponsored the “gang of eight” bill that allowed for legalization, but “then he cut and run” because it wasn’t popular with conservatives.

The debate marked a particular opportunity for Paul – who did not qualify for the recent Fox Business Network debate but returned to the prime-time stage Thursday after making the cut this time.

"It's great to be back," Paul said Thursday.

Paul, despite struggling with low poll numbers, seemed to have plenty of supporters in the audience, as his responses drew applause from the crowd several times. He also took shots at both Cruz and Rubio on their records.

Echoing Cruz' criticism, he said Rubio made a deal with Democrats on immigration and suggested he was weak on border security.

At the same time, Paul suggested Cruz was being disingenuous by claiming he was never for "amnesty." He said Cruz has an "authenticity problem."

The debate Thursday, with 12.5 million viewers, was the second-highest rated telecast in Fox News’ history.

Carson’s standout moment seemed to come at the end of the debate, when he used his closing statement to recite the Preamble to the U.S. Constitution.

“Please think of our founding fathers as you listen,” Carson asked. After reading aloud the Preamble -- including its call for a “more perfect union” – he said, “Folks, it’s not too late. Enough said.”

The polls in the Hawkeye State show essentially a two-man race for first between Trump and Cruz in the final stretch. Rubio has been holding steady in third position, while Carson’s numbers have been on a downward course in recent weeks.

After Iowa, the candidates head to New Hampshire, where Trump also leads but several other candidates are jockeying for position behind him.