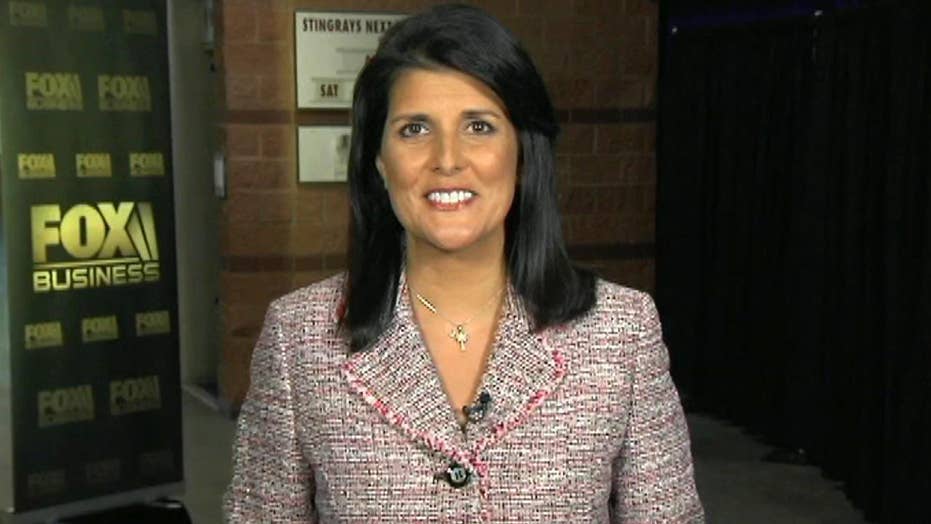 S.C. governor goes 'On the Record' on her controversial response to Pres. Obama's State of the Union address and sizes up Thursday's GOP debate on FBN

BALTIMORE – Congressional Republican leaders found themselves caught Thursday in the middle of a mounting feud over South Carolina Gov. Nikki Haley’s criticism of Donald Trump, complicating their efforts to ease party divisions and craft a legislative agenda for the year.

Hill Republicans are meeting at a retreat in Baltimore to hammer out their 2016 priorities, including on health care and national security. But they’ve also had to weigh in after Haley, during the official GOP response to the State of the Union address, cautioned Americans about following “the angriest voices” on immigration, a reference to Trump’s hardline views on the issue.

Haley later made clear she indeed was referring to Trump -- spurring rhetorical reprisals from the Republican front-runner and leading conservative figures.

On Thursday, South Dakota Sen. John Thune, a member of the GOP Senate leadership, stood by the South Carolina governor.

“I think [Haley] did a great job,” Thune said in Baltimore. “She presented a voice and a face for the party, which is really what we’re about.”

Thune also said Haley’s comments “reflected much of what we are talking about this week … attracting more people to our cause.”

But Washington Rep. Cathy McMorris Rodgers, chairwoman of the House Republican Conference, appeared Thursday at the retreat to try to ease the Haley-Trump controversy and bridge the divide, saying she understands voters have “a lot of frustration” with how Washington is being run.

Such frustration has led to the fierce debate on how to tackle such issues as immigration reform and the still under-performing economy.

Trump is ahead in the GOP race in large part because of his anti-establishment rhetoric that includes calls to build a wall along the U.S.-Mexico border and stop Muslims from entering the country until the federal government improves its vetting process.

Haley has called Trump a “friend,” but told Fox News’  “On The Record” with Greta Van Susteren she disagrees “with the fact that he wants to start using religion as a way to divide people.”

"During anxious times, it can be tempting to follow the siren call of the angriest voices. We must resist that temptation," Haley said in her Tuesday response. “Some people think that you have to be the loudest voice in the room to make a difference ... Often, the best thing we can do is turn down the volume.”

Trump and conservative pundits fired back.

Talk radio host and Fox News contributor Laura Ingraham tweeted after Haley’s response that she missed an opportunity to back working Americans on the subject of immigration.

And she blasted her for being the voice of the Republican “establishment.”