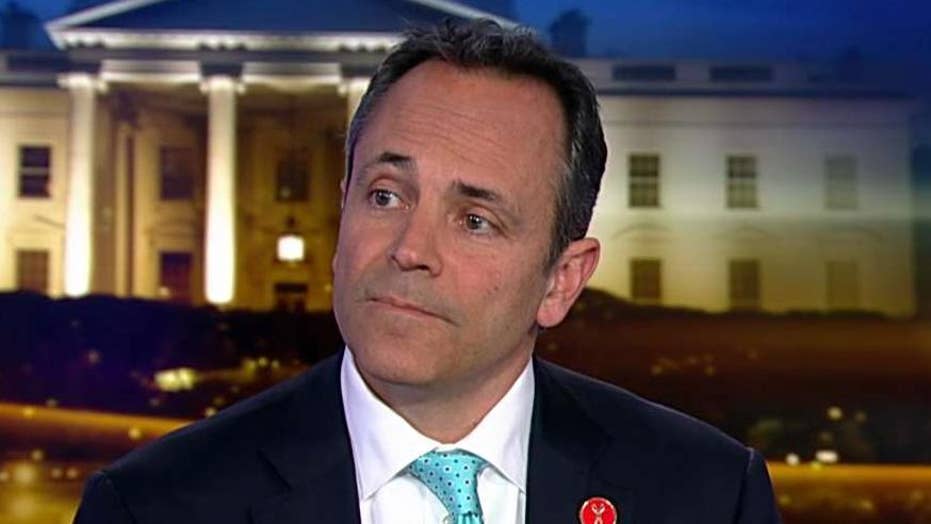 Kentucky looks to ban abortions because of gender, race, or disability of a fetus

Matt Bevin is Kentucky’s third Republican governor in the last half-century – and if he’s re-elected this year, he’d be the first in party history to win a second term to that office.

It likely won’t be easy.

Bevin gained national repute as a conservative reformer, but made an enemy of the state’s powerful teachers’ union. He’s the least popular governor in the United States, according to a Morning Consult poll in January. Also, the most recent head-to-head poll found Bevin trailing two Democrats vying for their party’s nomination in the May 21 primary.

“Bevin’s trouble comes largely because he has a reckless mouth,” said Al Cross, director of the Institute for Rural Journalism and Community Issues at the University of Kentucky and veteran political reporter for the Louisville Courier-Journal. “He goes after teachers in a sometimes outrageous way. A lot of teachers are Republicans, and a lot of Republicans are teachers. Teachers are still well thought of in rural Kentucky. If not for teachers, Bevin would be a prohibitive favorite for re-election.”

But despite the historical headwinds and friction with the teachers’ union, Bevin has some significant things going for him as Kentucky joins Louisiana and Mississippi for off-year gubernatorial contests in November.

“The biggest asset Bevin has, other than a pretty good economy, is Donald Trump,” Cross told Fox News.

The Trump administration’s first foray in 2019 politics was in Kentucky, as Vice President Pence and the first daughter Ivanka Trump made separate appearances in the state with Bevin. 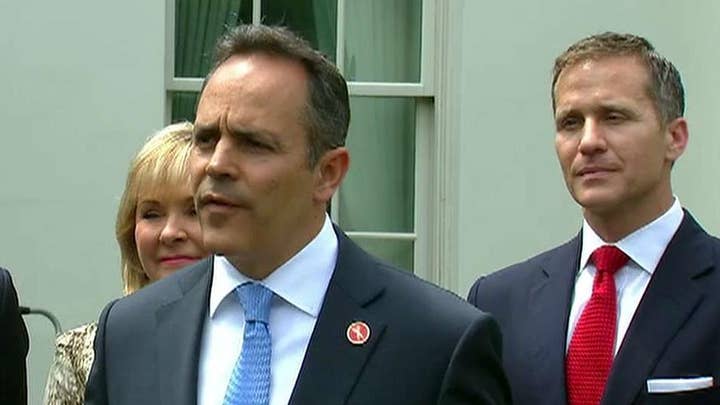 While Kentucky has gone Republican in every presidential election since 2000, Democrats and the GOP have evenly split the four governors’ races since that time. Meanwhile, both of the state’s two-term governors have been Democrats – ever since a state constitutional change in 1992 lifted a prohibition on serving consecutive terms.

'The biggest asset Bevin has, other than a pretty good economy, is Donald Trump.'

— Al Cross, director of the Institute for Rural Journalism and Community Issues at the University of Kentucky

In the Democratic primary, the younger Beshear is fending off House Minority Leader Rocky Adkins, a 30-year veteran of the legislature, and former state Auditor Adam Edelen, who is spending heavily.

Beshear is bypassing his Democratic opponents, while defending his father’s Medicaid expansion against Bevin who seeks work requirements. Cross said almost one-third of the state has benefitted from the elder Beshear’s Medicaid expansion—which could be a problem for Bevin.

In the GOP primary, a February poll found Beshear with a commanding lead over his opponents. The aforementioned December poll showed Beshear beating Bevin 48 percent to 40 percent, while Adkins narrowly edged out the governor 42 percent to 41 percent in head-to-head match-ups.

“Governor Bevin is deeply unpopular, to the point that a sizable portion of Republicans view him unfavorably,” David Turner, a spokesman for the Democratic Governors Association, told Fox News. “… His self-serving ways are going to come back to bite him in November and we feel confident in our chances of flipping this seat from red to blue.”

Bevin isn’t escaping the primary heat either. State Rep. Robert Goforth has played up being a native Kentuckian and taken aim at the New Hampshire-born Bevin, stating, “Our commonwealth needs a chief executive who is a conservative molded not by New England and Wall Street, but by Kentucky and Main Street.”

Bevin buttressed the New Englander image in January, when school districts were closing because of sub-zero temperatures, and he joked: “C’mon now, There’s no ice going with it or any snow. I mean, what happened to America? We’re getting soft.” In another national controversy, Bevin said in March he intentionally exposed his children to chickenpox.

On a policy level, Bevin has tried to rein in the debt-strapped state pension system with $43 billion in unfunded liabilities and clashed with the Kentucky Education Association. This prompted the union to lead mass “sick outs.” Teachers called in sick to protest at the state Capitol and numerous school districts across the state had to shut down for days.

Bevin chided some Republican lawmakers for lacking the “intestinal fortitude” to push his pension reform.

“Republicans in the legislature do not always get along with Bevin, but prefer him to a Democratic governor and they passed several bills that the governor can take credit for,” said Cross, of the University of Kentucky.

Despite the incumbent’s troubles, the state leans Republican this year, said Kyle Kondik, managing editor of Sabato’s Crystal Ball at the University of Virginia Center for Politics, which scores political races across the country.

“You have to acknowledge Matt Bevin’s approval rating is really weak, but Bevin won the first time by a bigger than expected margin, and he was an underdog,” Kondik told Fox News regarding 2015, when Bevin carried 106 out of 120 counties.

He also suggested the election could be an “indicator” for whether Democrats can mount a challenge against Senate Majority Leader Mitch McConnell, R-Ky., next year: “If they can’t win this race, they likely won’t have much of a chance against the Senate majority leader.”