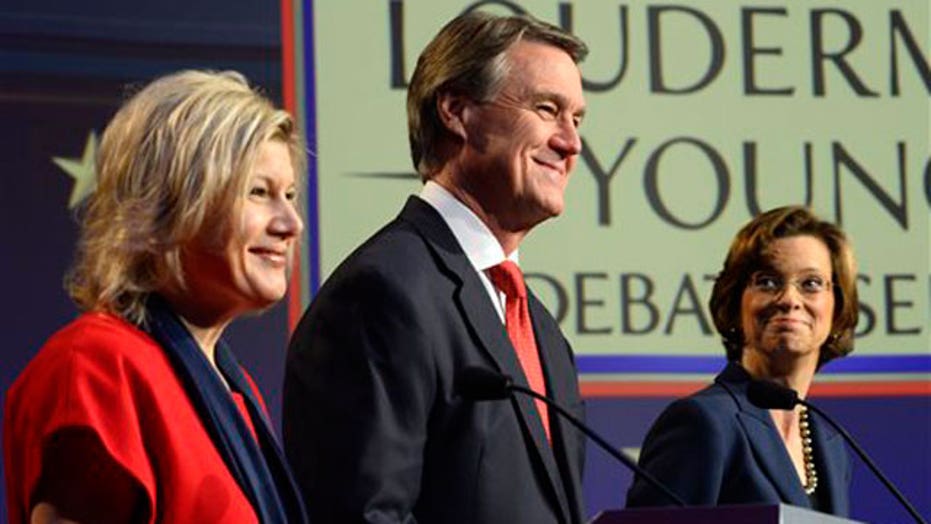 ATLANTA – In a closing-stretch push for all-out victory, Republican Senate candidate David Perdue brought in the big guns over the weekend. Party powerhouses Sens. Ted Cruz and Rand Paul rallied small-town crowds to get behind the former CEO of Reebok and Dollar General and send him to Washington.

“I can think of only a few businessmen that we have,” Paul told the crowd at a town square rally in McDonough, just south of Atlanta. “And I think it would be great to have someone with some common sense – with some business sense to create jobs.”

Job creation is the centerpiece of Perdue’s message to Georgia voters. As CEO of Dollar General, Perdue led a massive expansion of the company, creating 20,000 jobs in the process.

“The number one thing that we need to be talking about is who’s going to go to the Senate and add value to the debate of how to get the economy going to get people back to work again right here in Georgia,” Perdue told Fox News.

The race to replace retiring Republican Sen. Saxby Chambliss is surprisingly competitive – discomfortingly so for Republicans. What should have been a sure thing is now neck-and-neck, with Perdue locked in a dead heat against Democratic candidate Michelle Nunn.

Nunn is the daughter of former Sen. Sam Nunn, who served 24 years in the Senate at a time the deep South was deep blue. She is also the CEO (on leave of absence) for George H.W. Bush’s Points of Light Foundation – putting a foot in both the Democratic and Republican camps. In fact, Nunn is running her campaign more like a “Republicrat” – a person who talks like a Republican, but whose blood runs Democratic blue.

"There are lots of things I agree with the president on and there are lots of things I disagree with the president on," Nunn told the audience at a debate Sunday night. Where does she disagree? She believes the president should approve the Keystone pipeline; thinks he has made “irresponsible” cuts to the military; and thinks he needs to do more to work with Congress and tackle the debt. But she agrees with him on key issues like an increase in the minimum wage – as well as the mother of all campaign issues, ObamaCare.

That’s the ground Perdue is tilling in the closing days of the race as he makes the case that a vote for Nunn would be a rubber stamp for the president’s policies.

“He has said that his issues – his policies are on the ballot this time in this Senate race,” Perdue told Fox News aboard his campaign motorhome. “And this week he said you need to elect Michelle Nunn in Georgia to continue his policies. And I would argue those policies are failing – by any measure.”

Perdue also is warning voters that should she win, the first vote Michelle Nunn will cast will be to reinstate Harry Reid as majority leader. But at Sunday’s debate, she indicated her vote is not a lock.

"Right now I would tell you that I think that there are a lot of reasons to say to Harry Reid and Mitch McConnell that we need to do something different,” she told the debate audience.

Similarly, Perdue has refused to say if he will back Mitch McConnell for majority leader. Perdue is running as an outsider and does not want to give the impression that should he get to Washington, he will become the proverbial ‘inside man’.

Both campaigns are focused intensely on voter turnout. Supporters of Nunn registered tens of thousands of minority voters before the Oct. 6 deadline. Perdue’s campaign is reaching out to a pool of 600,000 so-called “low propensity” voters.

At a campaign stop in Canton, Ga., Sen. Ted Cruz implored voters to not cast a ballot for the third-party candidate – Libertarian Amanda Swafford – and instead vote for Perdue.

“I encourage you to maintain your passion for liberty,” Cruz told the crowd. “But this election,  a couple of votes, a couple of percentage can determine whether we win this election or it goes to a runoff.”

Georgia is one of two states this election cycle (Louisiana is the other) where if a candidate does not reach the 50 percent vote threshold, the top two vote-getters go head-to-head in a runoff. Because of military and absentee voter laws, the Georgia runoff isn’t until Jan. 6, 2015. If, on election night, the balance of power falls to the Georgia race, the two parties are expected to wage a battle royal for control of the Senate. Campaign spending could top $100 million. And the race would redefine ugly.

For the moment, both sides are playing for an outright win on election night. Because runoffs in Georgia favor Republicans, a showing of 50 percent-plus-one on Nov. 4 may be Nunn’s only path to victory.

Though most political experts believe David Perdue would prevail in a one-on-one matchup, the candidate wants to leave nothing to chance. Despite polls that suggest a runoff is increasingly likely, Perdue would like to put the race to bed on election night.

“In January of 2014,” he told Fox News, “I was in dead last place in a 7-way primary. We ended up winning the primary, we ended up getting through a very tough runoff ... you know, we’re trying to win this thing November 4th.”