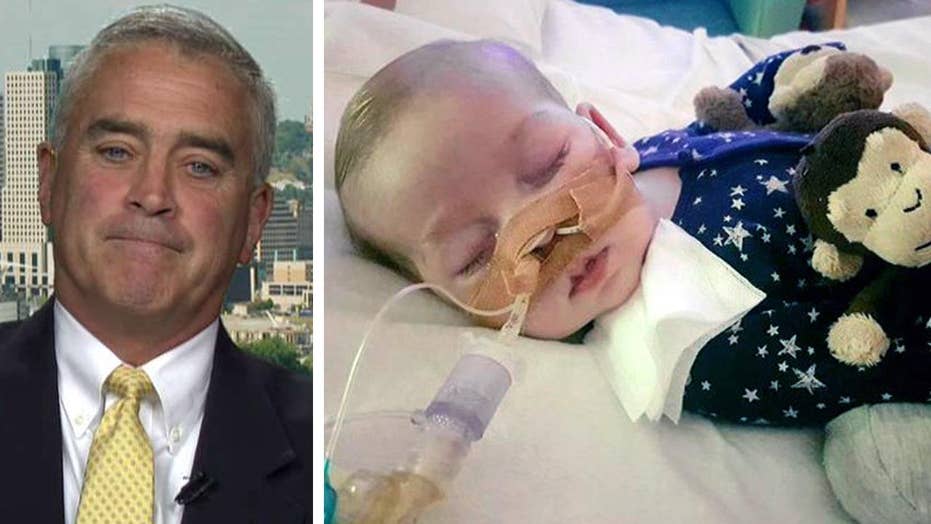 Republican lawmaker one of two congressman to introduce bill

House lawmakers are pushing to grant legal U.S. residency to terminally ill British baby Charlie Gard and his family so they can seek treatment in America -- a development that comes as a London court granted the family a brief reprieve.

Gard suffers from a form of mitochondrial disease, a rare genetic condition that causes progressive muscle weakness and brain damage.

His parents want him to be sent to the United States for experimental therapy -- Wenstrup and Rep. Trent Franks, R-Ariz., say they'll introduce a bill to grant the family legal permanent residence, presumably easing their path to seeking life-saving treatment in the U.S.

The London court put a little more time on the clock Monday, giving Gard's parents until Wednesday afternoon to submit new evidence their son should receive experimental treatment that could save his life.

Judge Nicholas Francis said a new court date has been set for Thursday.

The decision follows an emotionally charged hearing in London where Connie Yates, Gard’s mother, reportedly wept openly and the child’s father, Chris Gard, yelled at a barrister representing the hospital that wants to take their 11-month-old son off a breathing machine.

The case has captured international attention, including the sympathies of Pope Francis and President Trump -- who tweeted last week that if the U.S. could help, “we could be delighted to do so.”

Great Ormond Street Hospital, which initially had pushed to turn off Gard’s life-support system, applied for the hearing because of “new evidence relating to potential treatment for his condition.”

The new evidence came from researchers at the Vatican’s children’s hospital and another outside London. The Pope also said the Vatican’s hospital was willing to take Gard and that he hoped Gard’s parents could be allowed to “care for their child until the end.”

As the debate plays out on both sides of the pond, Wenstrup and Franks said in a joint statement that their bill will “support Charlie’s parents' right to choose what is best for their son, by making Charlie a lawful permanent resident in the U.S. in order for him to receive treatments that could save his life.”

“Should this little boy be ordered to die – because a third party, overriding the wishes of his parents, believes it can conclusively determine that immediately death is what is best for him?” the lawmakers asked. “…When government is able to overrule a parent or guardian in determining a patient’s best interest, every vulnerable patient is put at risk. We offer Connie Yates and Chris Gard our heartfelt support as they seek to care for their son.”

According to The Washington Post, New York Presbyterian Hospital and Columbia University Irving Medical Center have offered to admit Gard and give him the experimental treatment, pending emergency FDA approval. The hospitals have also offered to take the medication to London and provide doctors at Great Ormond Street Hospital as well.