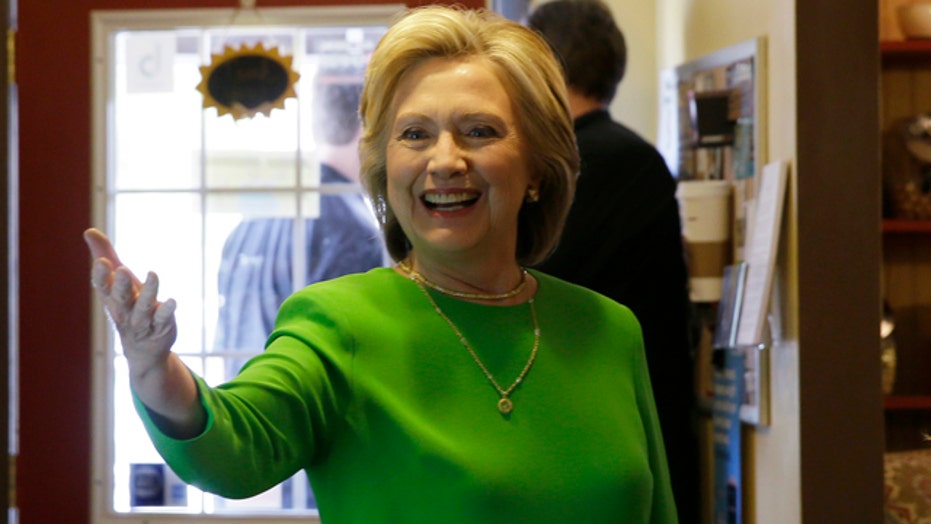 Clinton focusing on the economy, avoiding questions about the email scandal

NORWALK, IOWA – The now infamous video of the media circus at Hillary Clinton's first official campaign event, with reporters chasing Hillary Clinton's van "Scooby" like paparazzi, should be an early wake-up call about the 19 months ahead.

Most of the reporters looking like giddy Access Hollywood or TMZ correspondents on a red carpet were foreign correspondents from around the world (and some domestic ones too) who did not get credentials for the Clinton event for space reasons. The seats inside the event were taken by Fox News Channel, The New York Times and others on the list to cover the launch of Clinton 2.0.

The point is on the White House beat I have sometimes seen correspondents from around the world cover President Obama like an international celebrity -- or fascination -- instead of a commander-in-chief. Plenty of domestic reporters have been guilty too: did that radio DJ out West really need to ask Obama in the 2012 campaign about his favorite super-heroes?

Yesterday's repeat of correspondents chasing Clinton like silly schoolchildren is enough to make anyone wince. So with all of the Democratic and Republican hopefuls telling voters the stakes are so high in the 2016 election, it's about time all of us started pressing every candidate in both parties on the tough questions instead of just scribbling down what they ordered at Chipotle to keep our Twitter feed sated.

In the case of Clinton, another day out here in the Hawkeye state has passed without her doing a full-on interview or news conference. Yes she did walk in the direction of the media after Tuesday's event at a community college.

As reporters shouted various questions, Clinton basically ignored them. Instead she talked about getting "good information" from the middle class voters she had met with and said she might steal the idea from one of the participants about creating an "opportunity system" for people who are struggling.

"I want everyone to have the same opportunities," Clinton told reporters out here.

She is free to stay disciplined and that was indeed a summation of her message. But by any fair reading, that's not a "press availability" that politicians usually submit to.

To her credit, Clinton's communications director Jennifer Palmieri did do interviews Tuesday with TV correspondents like myself out on the road and said her boss will engage with reporters soon.

"Hillary Clinton will be doing a lot of interviews," Palmieri told me. "She did not want the focus of the national stage" to detract from interactions with real voters this first week.

"That's part of the process -- she's happy to engage in that (with reporters) but right now she's focused on talking to people one on one," said Palmieri.

And in fairness to Clinton, she does not need from a pure political standpoint to do immediate interviews to launch her name ID the way other candidates have to do.

"Nobody in America does not know she is running," one Democratic strategist unaffiliated with the Clinton camp told me. "Other candidates do it just to be known. She's actually talking to voters and not worrying about the Inside the Beltway" stuff.

True but reporters are not following candidates around to merely transcribe their speeches. NBC News' Kristen Welker showed the enterprise to stake Clinton outside a coffee shop Tuesday to ask what she needs to do differently from the 2008 caucuses and Clinton merely said she was real happy to be back in the state.

I suspect part of the reason Clinton is not engaging us yet is because she wants to avoid the goofy celebrity-focused questions I referred to at the top. But there are plenty of tough but fair questions that still need to be asked about her email server.

And I'm not referring to "gotcha questions" by the way. How about a substantive but direct one like, "How's the Russian reset going?"