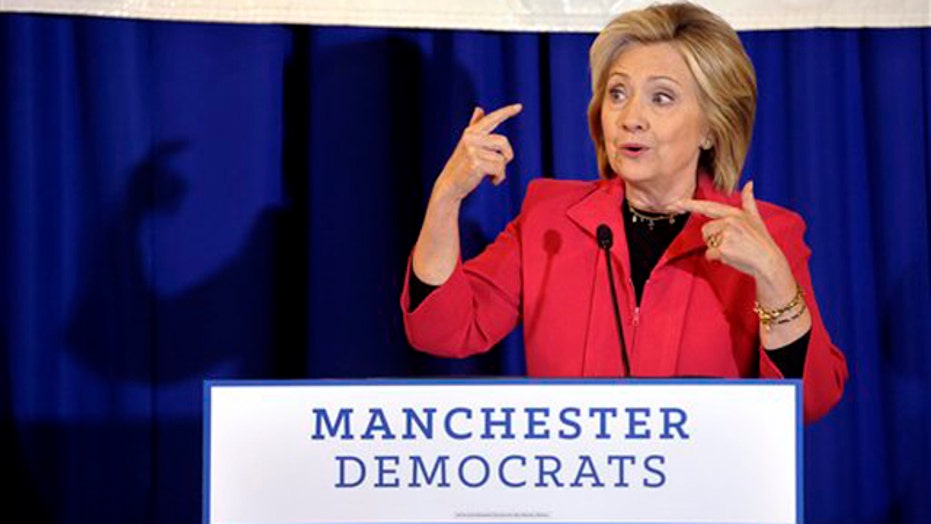 Reporter speaks out about being banned by Hillary's campaign

Daily Mail's David Martosko sounds off on 'The Kelly File'

The simmering dispute over media access to Hillary Clinton’s presidential campaign erupted again Monday when a reporter for DailyMail.com was told by the campaign he couldn’t attend her events in New Hampshire.

David Martosko, a reporter for DailyMail.com, a website affiliated with the Daily Mail in London, said the Clinton camp said his newspaper wasn’t part of the official group -- known as the print pool -- that covers the White House on a rotating basis. As a result, he was blocked Monday from covering her events in person for the pool.

"I got there when I was told to get there," Martosko told Fox News' Megyn Kelly Monday night. "Quarter to eight in the morning, I showed up in the parking lot, told them who I was, and they said 'No, you can't come.'

"This happened twice today," Martosko told Kelly later in the interview. "I just came right over here from an evening event where Mrs. Clinton was the keynote speaker ... I showed up again and said 'I'm the designated pool reporter' and I was told 'you need to leave.' I find that unacceptable and offensive, and I think most of my journalistic colleagues do as well."

The campaign said it is trying to resolve the issue. However, it denied any suggestion that Martosko was denied access because of his newspaper’s critical coverage of Clinton.

“The Daily Mail can sensationalize [the incident] as they see fit for their readers, but that's what happened," a Clinton aide told Fox News.

Major media organizations in Clinton’s traveling press pool issued a statement Monday night defending Martosko and rejecting any attempt by the Clinton campaign to “dictate” who covers the candidate.

“We haven't yet had a clear explanation about why the pool reporter for today's events was denied access,” said the statement signed by the Washington Post, Wall Street Journal, New York Times and Tribune Publishing, as well as the Daily Mail and others.

“But any attempt by the campaign to dictate who is in the pool is unacceptable.”

"The pool in general is tight-knit organization," Martosko told "The Kelly File" Monday night. "And to a man and woman, they all said, 'No. The Clinton campaign does not get to choose who covers them.'"

Most presidential campaigns essentially follow the procedures outlined by the White House Correspondents Association. To accommodate the frequent media crush, a newspaper reporter, a photographer and a TV crew, known as the pool, covers an event. Then the details are widely shared via email to reporters and others.

However, in covering Clinton, a group of 14 news organizations, including The New York Times and The Washington Post, have formed to cover events and share the information on a limited basis.

Group members argue that those who don’t share the expenses of covering a campaign shouldn’t have immediate access to the information, or “pool reports.”

Still, this is not the first time a member affiliated with the foreign press has complained about being excluded from covering Clinton up close.

“My feeling is that some people have established the rules and that we haven’t been part of the discussion,” a reporter for the French TV network Canal Plus recently told The Post. “I went to Iowa to cover [Clinton’s] first event. I only saw her van. … I am fighting for equality and access for all.”

The Clinton camp on Monday also said: "We have been working to create an equitable system, and have had some concerns expressed by foreign outlets about not being a part of the rotation.”

A DailyMail.com spokesperson on Monday afternoon confirmed that Martosko was denied access to the Clinton event and kept from boarding a van that her campaign is using to transport pool reporters around New Hampshire. However, the campaign has yet to provide a full explanation, considering Martosko was scheduled to be the designated print pool reporter, the spokesperson also said.

Martosko tweeted: “For those of you asking: What I've seen online re: today is accurate, and I intend to report here whether they want me to or not."