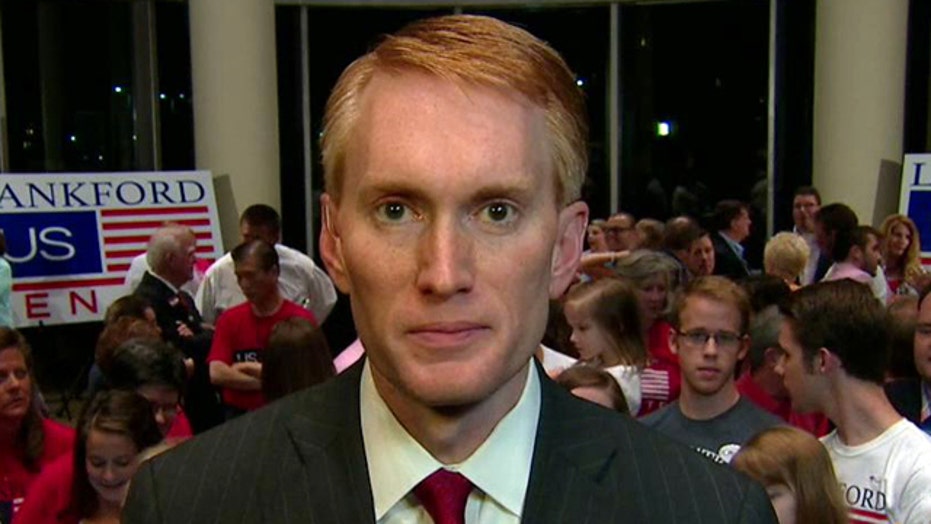 Lankford captured over 50 percent of the vote in the seven-candidate GOP primary to avoid a runoff. He will face the Democratic nominee and an independent in November.

Lankford spoke to a cheering crowd at a victory party Tuesday, saying no one can fill Coburn's shoes and he is humbled by the support.

He said that the election is not about his family going to Washington, but is "about getting Washington out of our families.”

Meanwhile, Oklahoma Sen. Jim Inhofe defeated four Republican opponents Tuesday to win the primary for his Senate seat. This year's election is the first time in modern history that both of Oklahoma's U.S. Senate seats are on the ballot at the same time. Coburn announced in January that he was foregoing his final two years in office after a recurrence of cancer.

Inhofe is bidding for a fourth, six-year term in the Senate. He'll face one Democrat and three independent candidates in the Nov. 4 general election. The 80-year-old congressman was easily able to fend off his primary challengers, who claimed he had stayed too long in Washington and wasn't conservative enough.

Lankford, the longtime director of one of the nation's largest Christian youth camps, faced fierce competition from Tea Party-backed T.W. Shannon, who last year became both the youngest and the first African-American speaker of the Oklahoma House.

Both far outpaced their opponents in fundraising, with Lankford reporting total contributions of about $2.1 million, while Shannon reported raising about $1.4 million.

Both candidates also enjoyed support from "dark money" groups that aren't required to list their donors. Much of that support came in the form of attack ads that drew a swift rebuke from Coburn, a political maverick who remains wildly popular in Oklahoma.

On the campaign trail, both Lankford and Shannon touted their conservative credentials. Lankford, who rose quickly through the U.S. House leadership ranks, talked about his willingness to take on government bureaucrats from his perch on the U.S. House Committee on Oversight and government reform and delve deep into complicated federal issues like the budget.

Shannon, who won the speaker's race with the help of the Republican caucus' right wing, highlighted his refusal to support a bond issue to pay for state projects and his creation of a special House committee to push back against what he perceived as an overreaching federal government.