A self-described "real Indian" who is running against Mass. Democratic Sen. Elizabeth Warren is suing after city officials demanded he take down his signs calling her a "fake Indian."

The upstart independent Senate challenger, Shiva Ayyadurai, on Sunday filed a federal lawsuit alleging that the demand from the city of Cambridge violates his constitutional free speech rights, according to The Washington Times.

Since March 17, Ayyadurai's campaign bus has sported two identical signs picturing himself and a rendition of Warren wearing Indian attire. Emblazoned next to the images are the words: "Only a REAL INDIAN Can Defeat the Fake Indian."

The bus has reportedly been stationed in a parking lot in front of an office building owned by Ayyadurai, who faces exceptionally long odds, for more than a month -- just a mile from Warren's home. 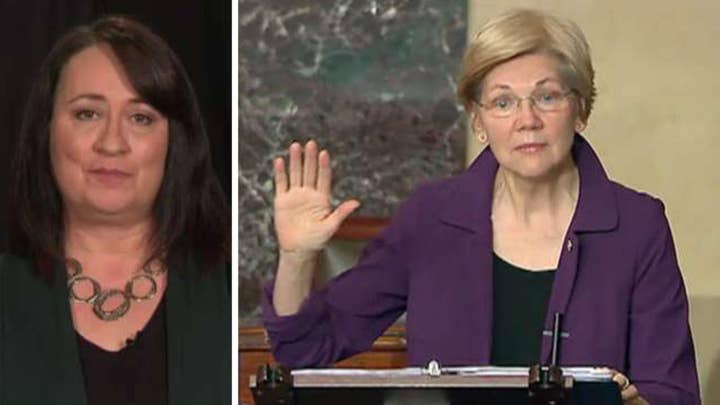 Earlier this month, the campaign received a notice from Cambridge building inspector Branden Vigneault that the signs lacked the appropriate "approvals and permits," according to local reports and the Ayyadurai campaign.

Vigneault threatened fines of $300 per day plus additional legal penalties if the signs remain in place, according to Ayyadurai.

"The problem with Warren’s story is that none of the evidence supports it."

Ayyadurai's campaign reportedly thinks the building code doesn't apply to the signs because they're on a bus, not a structure.

Warren has long been accused of saying she is of Native American heritage to help in securing jobs, including one as a Harvard law professor.

When asked in March whether she’d agree to calls for genetic testing to resolve the heritage controversy, Warren launched into a family history, as purportedly told by her parents and grandparents, before saying, “It’s a part of who I am, and no one’s ever going to take that away.”

“The problem with Warren’s story is that none of the evidence supports it,” Cherokee genealogist Twila Barnes wrote after researching Warren's family.

But observers have also accused Ayyadurai of puffery and distortion, as well. The attacks mostly center on his longstanding claim to be the inventor of e-mail.