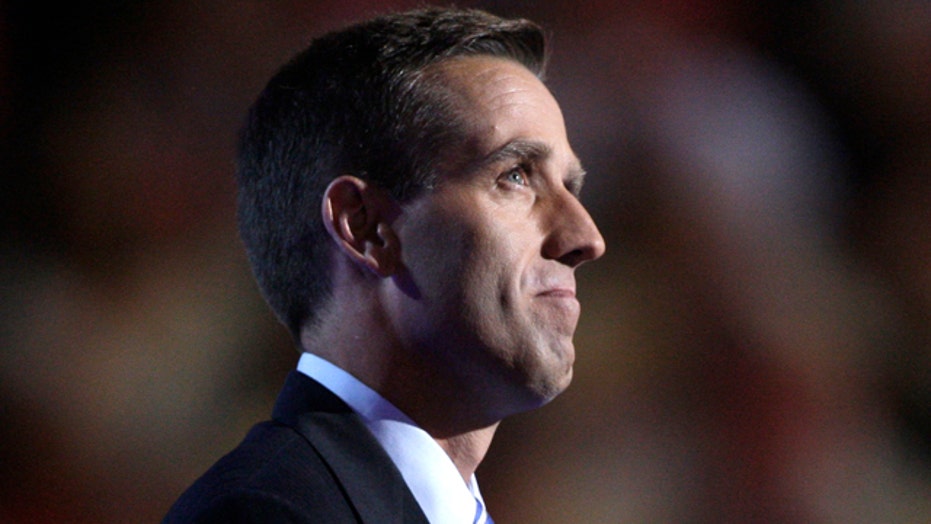 Here are some reactions to his death:

"Michelle and I humbly pray for the good Lord to watch over Beau Biden, and to protect and comfort his family here on Earth." -- President Barack Obama.

"He was extraordinarily in tune with people. He was passionate about serving. ... I think it's important that people know what a real, genuine, decent guy he was." -- Democratic Delaware Gov. Jack Markell.

"Throughout his life, Beau never shied away from doing the right thing, even when it meant doing the hard thing. Beau served his country and community with honor, and that's how he will be remembered."  -- U.S. Sen. Chris Coons (D-Del.).

"I first met Beau when he was six years old. ... It's been a privilege to watch him grow up and become a leader in our state and in the Delaware National Guard. My last memory of Beau was during the Return Day Parade in Georgetown, Delaware, two days after last November's election. I was walking along the parade route shaking hands with people just as Beau passed by, standing in a National Guard vehicle, waving at the crowd.  For a moment, our eyes met, he waved to me and I to him. Then, he mouthed these words to me, `I love you.' I smiled and returned them to him. And, he was gone." -- U.S. Sen. Tom Carper (D-Del.)

"Beau had a warm and generous spirit. He was a truly giving person, and he appreciated the good in others in the way we all should. He leaves a legacy of service, and also a great personal legacy that calls on each of us to be more gentle in our judgments and more gracious with our thanks. He was one of the best of the good guys." -- U.S. Rep. John Carney (D-Del.)

"He was filled with a sense of honor, duty, and humility - to the core. He was a class act, period, ingrained with integrity, compassion, a sense of moral obligation to help others, and especially people who were hurting." -- Secretary of State John Kerry.

"Beau's dedication to public service was deep, broad and profound. He embodied the best and most noble traits that his parents sought to instill in him. I know Joe is very proud and he should be proud because Beau was simply a joy to know." -- Democratic Senate minority leader Harry Reid (D-Nev.).

"Tonight, our country lost a committed public servant, someone who devoted his own life to making the lives of others better. Beau was steadfast in his defense of our principles, whether as a member of the Delaware National Guard or as the state's Attorney General. ... I had the privilege of knowing Beau personally. He was a `mensch' in the truest sense of the word." -- DNC Chair Rep. Debbie Wasserman Schultz.

"My God, he's just a young man. ... It's just so difficult. ... I never heard a disparaging word about him as a person." -- Former Delaware governor and Republican U.S. Rep. Mike Castle, who many political observers expected to square off against Biden in the 2010 U.S. Senate race before Biden opted not to run and Castle suffered a stunning defeat in the GOP primary.

"As a dedicated Attorney General and soldier, Beau devoted his career to proudly serving his country and home state. It was an honor to serve alongside him as he worked tirelessly to fight for the powerless and protect the most vulnerable, our children." -- Dennis P. Williams, Democratic mayor of Beau Biden's hometown of Wilmington.

"The good die young. ... He was a rock star. ... He had a great image, great character. He was just a friendly, approachable individual."  -- New Castle County (Delaware) Executive Tom Gordon, a longtime friend and political ally of Joe Biden.

"This is truly tragic news. ... Beau served his country and the citizens of Delaware with honor and dignity. He leaves behind a lasting impact on the world around him. He will be missed." -- Charlie Copeland, chairman of the Delaware Republican Party.

"From serving our country in Iraq to serving his beloved home of Delaware as Attorney General, Beau Biden dedicated his life to a cause greater than himself. He will be deeply missed but remembered lovingly for lives he touched. The thoughts and prayers of all of Chicago are with the Vice President, Dr. Jill Biden and the entire Biden family during this very difficult time." -- Chicago Mayor Rahm Emanuel.