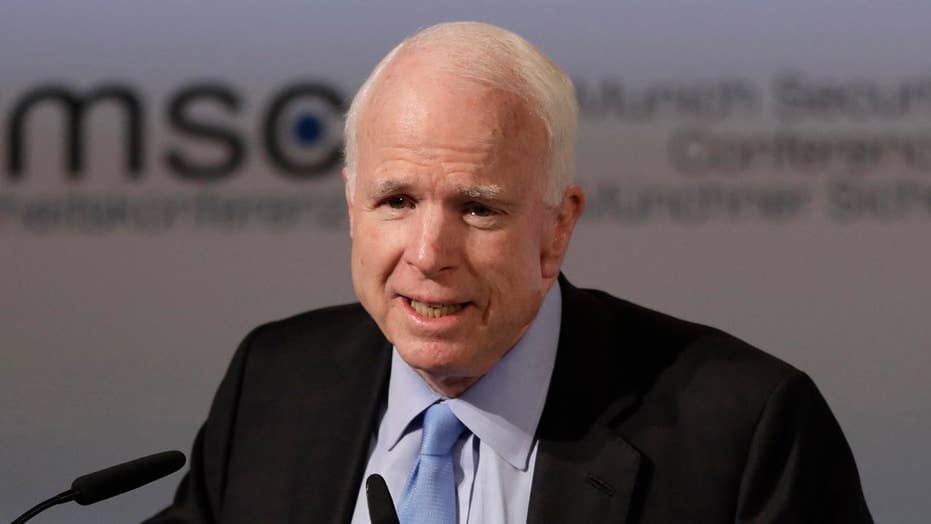 Did John McCain go too far when criticizing President Trump?

Retired Marines react on 'Fox & Friends' to the senator's remarks

John McCain isn’t the only senator who can toss barbs at a fellow Republican.

“Everything that he says about the president is colored by his own personal dispute he’s got running with President Trump, and it should be taken with a grain of salt, because John McCain’s the guy who’s advocated for war everywhere,” Paul said on “This Week.”

Paul added that if McCain were “in charge” the country would “be in perpetual war.”

“If you look at the map, there’s probably at least six different countries where John McCain has advocated for us having boots on the ground,” said Paul, who noted that McCain supported the Iraq war.

McCain on “Meet The Press” had earlier compared Trump – with whom he’s long had myriad differences and squabbles – to a dictator.

"The first thing that dictators do is shut down the press," McCain said. “And I'm not saying that President Trump is trying to be a dictator. I'm just saying we need to learn the lessons of history.”

But Paul said McCain’s issue with Trump is less about the First Amendment and more about the men’s views on overseas engagements.

“I think it's more a foreign policy debate, and Trump and McCain are on opposite sides of that debate,” Paul said. “And I tend to sympathize more with the president. We don't need to continue to have regime change throughout the world, nation-building.”

As far as McCain’s rhetoric saying Trump is trying to “shut down the press,” Paul cautioned against hyperbole.

“I don't agree with his analysis and applying that to the president,” he said. “I haven't seen any legislation coming forward that wants to limit the press. I see President Trump expressing his opinion, rather forceful in his own -- you know, his own distinct way.”