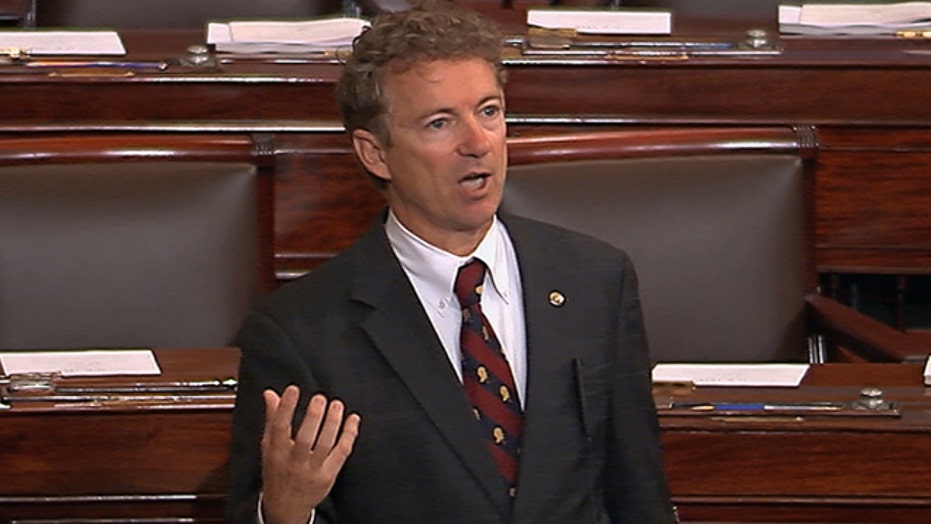 Paul may have lacked backup from Twisted Sister frontman Dee Snider in his fight to upend the spy programs. But the Kentucky Republican certainly channeled Snider’s glam rock, mid-‘80s anthem when he challenged most senators – including elder statesmen of his own party -- and the national intelligence establishment.

The first-term senator and GOP presidential hopeful wasn’t completely alone in his-not-so-quixotic effort, which helped block a reauthorization of the National Security Agency's bulk collection of Americans' phone records; the program lapsed overnight. A cadre of supporters camped out in the Senate’s public viewing gallery, costumed in red “Stand with Rand” t-shirts. And Paul’s libertarian wingmen from the House of Representatives, Reps. Justin Amash, R-Mich., and Thomas Massie R-Ky., lurked nearby. They staked out positions behind the back rail of the Senate chamber.

Paul declared that the NSA should “quit wasting time on innocent American people.” He said that the U.S. wasn’t “collecting the information of terrorists. We are collecting information on all Americans all the time.”

“This is a debate over a right to be left alone!” hollered Paul.

“We’ll fight the powers that be…just…
Don’t pick our destiny…’cause…
You don’t know us. You don’t belong.”

Key domestic surveillance components of the controversial Patriot Act (approved right after 9/11) were on the verge of expiring Sunday unless the Senate got in line with a House bill to renew those efforts. The House okayed its legislation last month. But Paul and other lawmakers simply weren’t going to let that happen – despite a 338-88 vote in the House. Paul was determined to jam the Senate’s operations and force the programs to lapse – if even for a few days.

Senate rules are structured like that. Even if a vast majority of senators want to do one thing, Senate procedure and precedent often favors the minority. Senators can object. They can talk. They can filibuster. They can obstruct. Paul was certainly going to make sure he had his say yesterday, about an hour after the Senate convened in a rare Sunday session.

Senate Majority Leader Mitch McConnell, R-Ky., had already teed-up a Senate recess at 5 p.m. ET sharp Sunday so senators could hear from their respective leaders about the way forward. On the floor, Sen. Dan Coats, R-Ind., was deep into an oratory about the merits of the NSA programs. He railed against those who asserted the government was tracking what Americans purchase at Costco and what movies they view on Netflix. Coats derided such allegations as “a bunch of hokum.” Paul then impatiently interrupted a visibly upset Coats if he would entertain a question. Coats wouldn’t. Sen. John McCain, R-Ariz., then asked the Hoosier State Republican if he would entertain an interrogatory. Coats allowed that. Then Sen. Chuck Grassley, R-Iowa, presiding over the Senate, stopped everyone.

“All time for debate has expired,” intoned Grassley, noting that the Senate was set to recess, per McConnell’s order.

Paul claimed there were still five minutes available to speak that the Democrats didn’t use. He sought “unanimous consent” to use the Democrats’ time. “Unanimous consent” is the Senate’s currency. If a senator obtains “unanimous consent,” they could keep Mad Men or Downton Abbey on the air for another season or change the name of the Washington Redskins. They’re stuck if they can’t. This is why Paul can be such a thorn in the side of everyone on spy operations.

McCain objected to Paul’s request. But the Kentucky Republican insinuated that his colleagues weren’t playing by the rules. Paul said he waited for 30 minutes to speak and there was no way all of the time available melted off the clock.

“The time was divided in the usual form and time for debate has expired,” explained Grassley from the rostrum.

“Let’s have the regular order observed,” demanded an agitated McCain. He then upbraided Paul on three different occasions about Senate procedure.

“People don’t know the rules of the Senate,” hissed McCain. “Maybe they should learn.”

Grassley continued to assert that the Senate burned off all of the available time. And Paul challenged the ruling of the Iowa Republican and demanded a vote. This is where Paul stumbled. He failed to get another senator to also call for a vote to contest the presiding officer’s decision. Such a vote requires at least a “second.” Paul then tried to require the Senate to take attendance vote – a vote known as a live quorum call. That would entail the appearance of all senators in the chamber.

“Oh you’re so condescending.
Your gall is never ending.
We don’t want nothin’…not a thing from you.”

The Senate finally took the respite for senators to huddle with their respective leadership teams. A little after 6 p.m. ET, an angry McConnell tried propounding a unanimous consent agreement to re-up most of the expiring domestic surveillance programs for two weeks. It was a final effort to stem the plan to shut down the programs at midnight. McConnell’s gambit would still permit some wiretapping and allow the feds to pursue “lone wolves.” But Paul objected.

In fact, Paul didn’t even object at first. He started to give a speech explaining his opposition to McConnell’s proposal. In a rare moment where the Senate devolves into something similar in the House, Paul’s Senate colleagues shouted him down. They demanded to know if he objected or not.

Paul objected. McConnell later called a vote to get the Senate to overcome a filibuster to consider the House-approved NSA bill. A similar vote in the wee hours of Saturday morning more than a week ago only garnered 57 ayes, falling three short of the 60 required. McConnell told senators the House measure has “serious flaws” but that “there is a determined opposition to try to end the NSA program altogether.” Without naming Paul, the majority leader directed heat at his Kentucky colleague. McConnell suggested that NSA opponents waged “a campaign of misinformation and demagoguery” based on “Edward Snowden ... last seen in Russia.”

The Senate voted and this time collected 77 yeas, more than enough to leap onto the House bill. Still, Paul successfully blocked an immediate reauthorization of the spy programs. The Senate would have to vault over another parliamentary hurdle – sometime Tuesday – to cut off all debate on the NSA bill. A final vote could occur then, or perhaps as late as Wednesday if Paul wants to drag things out further. There’s a possibility the Senate could attach some amendments to the bill before final passage and ship it back to the House. Then the House and Senate would be further out of synch, having not approved the same legislation. It’s unclear if the House could accommodate any changes. Even so, that means the some surveillance operations are out of commission for a while.

“The Patriot Act will expire tonight. But it will only be temporary. They will ultimately get their way,” conceded Paul.

What unfolded Sunday in the Senate was a trifecta of longtime percolating factors. First, the public has long held reservations about the breadth of the Patriot Act. Some of those concerns materialized on Capitol Hill nearly two years ago. Justin Amash came close to attaching an amendment to a defense bill to kill some of the domestic surveillance provisions. At the same time, Paul’s effort caught fire in libertarian political circles. He then burnished his political brand around this issue. McCain decried Paul’s efforts to block the NSA reauthorization as “quite a successful fundraising exercise.”

Finally, much of this crystallizes because of one individual. Not Rand Paul. Not Justin Amash. But Edward Snowden. Nearly two years ago to the day, Snowden rocked the world with a breathtaking leak about America’s intelligence-gathering operations. Rand Paul may have incorporated the “We’re Not Gonna Take It” hook into his arguments about the NSA. But it was Snowden who sang lead on this in 2013.

So now the programs expire for a time. Security hawks find this unsettling. Those who agree with Paul find it unsettling that the NSA will probably switch the programs back on in a few days, too.

“We’re Not Gonna Take It” was always a tune of protest. An exaltation that some people are fed up. In this case, they’re fed up over what they perceive is a gross government intrusion. Paul tapped into that angst. And Sunday’s drama revealed that some on Capitol Hill are fed up with Paul, too.