At 18, you have the right to vote, serve on a jury and serve your country.

But buy cigarettes? In a bid to snuff out smoking among teens, an increasing number of states are trying to delay that ability until age 21.

New York and Maryland became the latest states to act this week. The New York state Senate voted Monday to raise the tobacco and e-cigarette purchasing age from 18 to 21, sending the bill to Gov. Andrew Cuomo’s desk. The Democratic governor is expected to sign it – coming after New York City already raised its smoking age to 21 under the Bloomberg administration.

Maryland GOP Gov. Larry Hogan is considering similar legislation that just passed the General Assembly but reportedly has not said whether he would sign it.

“Increasing the sale age of all tobacco products will help counter tobacco company efforts to target young adults at a critical time when many move from experimenting with tobacco to regular smoking,” Ungar said.

As part of their push, Tobacco 21 is targeting products ranging from cigarettes to smokeless tobacco to e-cigarettes. Hawaii, Utah, Oregon, California, Maine, Virginia, New Jersey, Massachusetts, Arkansas and Washington D.C. have already raised their tobacco purchase age to 21, all in the last five years.

New York will soon join the list presuming Cuomo signs the state bill – and the governors of Illinois, Washington state and now Maryland are considering signing similar legislation. Several other states are pressing forward with their own bills including Florida, Ohio, Louisiana and Arizona.

Florida state Sen. David Simmons of Florida, a Republican who introduced the “Tobacco 21” legislation, told Fox News that he is “getting tremendous support.”

“It’s a common-sense issue,” he said.

A new law in Arkansas, meanwhile, would gradually raise the tobacco age from 18 to 21 over the next three years. State Rep. Lee Johnson, a Republican who introduced the legislation in his state, told Fox News: “While it won’t prevent all high school consumption of nicotine, I do believe it will be effective at reducing rates of use.” He notes that active military are exempt from the new rules.

The Centers for Disease Control and Prevention reports that “Nearly 9 out of 10 cigarette smokers first try cigarette smoking by age 18” and that “Nearly 1 of every 5 high school students (20.8%) reported in 2018 that they used electronic cigarettes in the past 30 days—an increase from 1.5% in 2011.” The CDC, in the report, recommended raising the tobacco age to 21 to curb youth tobacco product use.

Most pieces of Tobacco 21-backed legislation include prohibiting the use of e-cigarettes for those under 21 years old. That industry is not publicly opposing the legislation, however. A Juul spokesman reportedly said in reference to Ohio legislation that “Tobacco 21 laws have been shown to dramatically reduce youth smoking rates,” voicing support for raising the minimum purchase age for all tobacco products.

Altria, which owns Marlboro and a 35 percent stake in Juul, also told Fox News in a statement: “We agree that the current trends in underage e-vapor use must be addressed. Tobacco harm reduction for adults cannot succeed without effective measures to reduce underage use of all tobacco products. The best approach to achieving this goal is to increase the minimum age for purchasing tobacco products to 21. Taking this important step will address the main way underage youth gain access to tobacco products today – from friends who are of legal age.”

San Francisco, meanwhile, has proposed banning all e-cigarettes until the FDA has time to evaluate the risks associated with “vaping.” 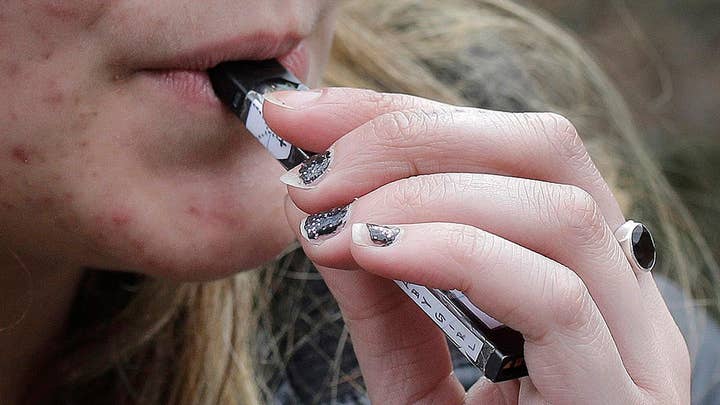 Opponents of the legislation, however, have voiced concern that it could drive up illegal sales among young smokers.

Todd Maisch, CEO of The Illinois Chamber, a nonprofit group which lobbies for a variety of businesses, told Fox News “we remain opposed to the Tobacco 21 push” and that the legislation “creates a gray market in the industry, the more you restrict the use of a legal product the more you drive people to purchase on the gray or black market.”

Addressing one area of potential concern, many of the states have exceptions for active-military members between ages 18 and 21.

In Florida, Simmons said, “We believe that if you are serving in the military and you want to go ahead and smoke or take whatever other tobacco products that are permitted then you go ahead” and that “the overall danger is to young people.”