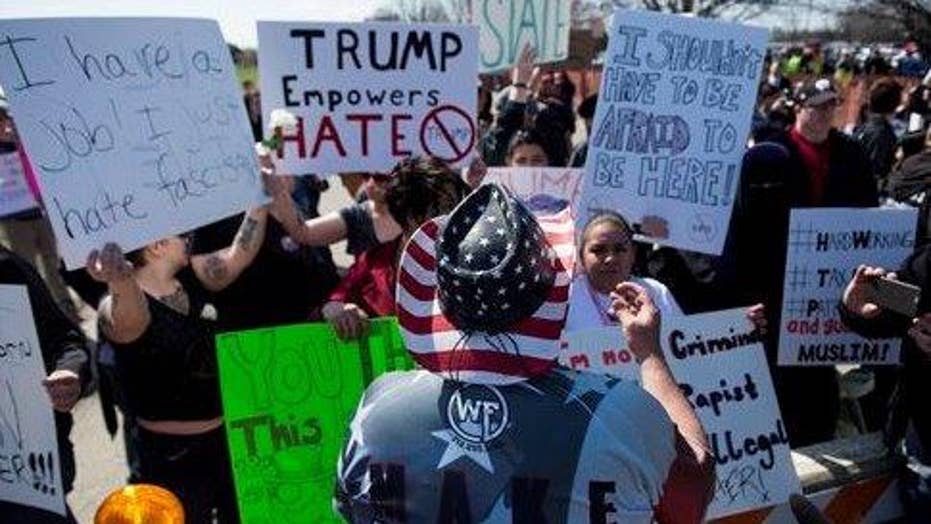 'General Strike' protests against Trump take place across US

The strike urges workers to walk off jobs, protest the president

Protesters held demonstrations on Presidents Day Monday in cities across the country in opposition to Donald Trump’s presidency, questioning the legitimacy of his White House victory and opposing him on a variety of issues including immigration and climate science.

At least nine events were held under the social media-driven “Not My Presidents Day” movement.

"Donald Trump is not my president. What president has been?" activist Gray Michael Parson told a crowd of about 100 people in Dupont Circle, in Washington, D.C. "I implore you to please get involved."

The events Monday follow a weekend of rallies, including one in New York’s Times Square against Trump’s temporary travel ban on several mostly-Muslim nations that drew hundreds of demonstrators.

Trump’s presidency and his policies -- particularly his aggressive efforts to secure U.S. borders from terror attacks -- have sparked protests since election night, when he won the White House through the Electoral College vote but lost the popular vote by roughly 2 million ballots.

The late-afternoon event in Washington was focused on the issues of race and gender equality.

An earlier, midday rally was scheduled in front of the Supreme Court to make the case that Russia “invaded” the 2016 primary and general election. So the results are invalid, unconstitutional and should be made “null and void,” according to organizer Revote Coalition.

Organizers expect 14,000 demonstrators, but the numbers appeared only in the hundreds.

There was no reports of major arrests or property damage, like that associated with Inauguration Day protests last month.

While some of the rallies had a particular theme, like Atlanta’s call to “impeach” Trump, others, like the one in Chicago, was a call for unity, organizers said.