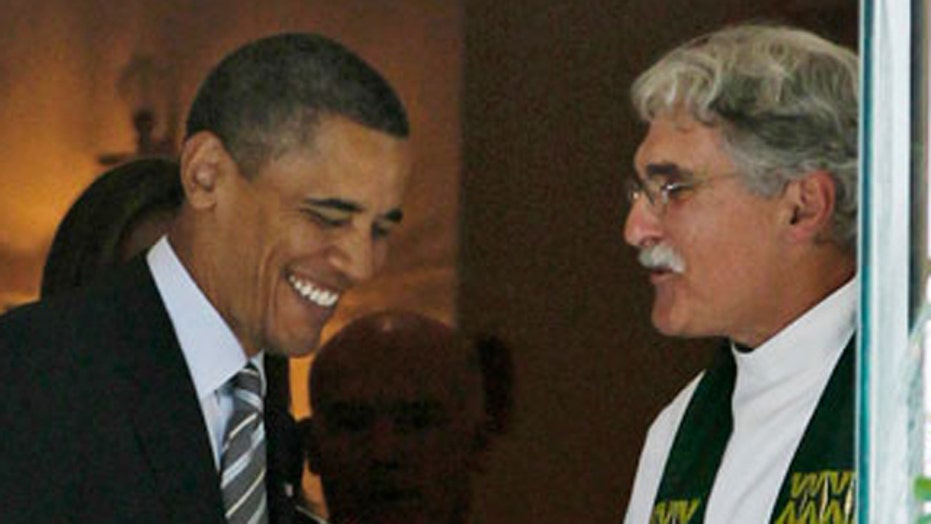 -- Sermon by Rev. Luis Leon, pastor of St. John’s Episcopal Church, in his Easter sermon to congregants, including President Obama and his family, according to the press pool report of the first family’s visit.

President Obama can’t catch a break when it comes to preachers.

He wrote of choosing Rev. Jeremiah Wright’s church in Chicago as part of his effort to embrace the mainstream experience of black Americans, a journey that helped Obama find a political base from which to launch his career. But Obama ended up having to defend and then denounce his onetime spiritual guide in order to win national office.

After that controversy blew over, Obama and his family settled on worshiping at St. John’s Episcopal Church, just across Lafayette Square from the White House where every president since James Madison has made at least a visit – the ultimate nod to presidential religious conformity.

On Easter, the highest holiday of the Christian faith, pastors usually offer an enticement to the many visitors dragged by spouses and parents who are church members. And it’s easy since the message of Easter is pretty much the exclamation point of the faith, literally the good news: the defeat of sin and death. Hooray, now grab a lily, please fill out your visitor’s card and enjoy your brunch.

But the pastor at St. John’s took the occasion of the big day, combined with national attention, to mount an attack on conservative Christians, saying that the “religious right” favored segregation, unequal status for women, the repression of homosexuality and the deportation of immigrants.

Leon and his flock may disagree with the orthodoxy of many Catholics and evangelicals, but Easter is an odd time to preach to the choir, especially with political attacks. Regular congregants might have felt flush with self-righteousness but some newcomers and many of those reading Leon’s words beyond the church’s walls might understandably feel unwelcome.

Episcopalianism was once a political safe space – an uncontroversial, establishment faith that was apart from radicals and holy rollers. Eleven presidents, more than any other denomination, claimed the American offshoot of the Church of England as their spiritual home.

But as the faith has shrunk, or perhaps because the church has shrunk or even as a cause of the church’s shrinkage, it has ceased to be the mainline haven from America’s wild and wooly spiritual journey and become a highly politicized, very liberal denomination.

The faith today doesn’t much resemble that of George Washington or, in some respects, even George H.W. Bush.

Obama surely wasn’t seeking controversy when he and his family in their Easter finest strode across the park for church, probably quite the opposite. But the Episcopalians are remaking themselves. The decision to drop prohibitions against homosexuality a decade ago drove many conservatives from the church, leaving the remaining liberals in an even more powerful position.

Panelists on “Meet the Press” pondered this week whether the recent national focus on social issues was attributable to growing economic confidence.

NBC News’ Chuck Todd wondered if all the talk about same-sex marriage, gun control, abortion and immigration wasn’t “a sign the economy is coming back.”

In the universe of leading economic indicators, this is pretty small beer. It is, however, a strong indication that the left is riding quite high these days. After nearly two decades of mostly trying to avoid the social issues that so damaged the Democratic Party in the previous generation, the blue team is ready to claim victory on those subjects.

Like the pastor at Obama’s church, many on the left seem to feel that the time has come to settle scores. Democrats believe Republicans won several elections between 1968 and 2004 by exploiting social issues and are excited at the thought of retributive justice.

The real closeting in the Democratic Party was of social liberalism between 1994 and 2008, as the party shoved issues like gay rights and gun control down in favor of Clintonian triangualtion. Now, liberals feeling empowered by Obama’s re-election are ready to have their way.

But polls suggest the opposite of the economic easing suggested on “Meet the Press.” Americans are in fact feeling more pessimistic and anxious – paychecks are smaller, gas is expensive and health care costs are on the rise, all amid a saggy job market.

This is not the best moment for a party to be revving its engines on divisive social subjects. And the dominance of these topics of late reflects not some thirst for cultural controversy but rather events (the Newtown massacre) the push by liberal activists (the same-sex marriage fight) and the preferences of reporters themselves.

Not only will these issues alienate voters in more conservative states and districts where Democrats have pinned their hopes for midterm elections, it also sends a strong signal to moderates that the president’s party has forgotten its promises of focusing on the pocketbook concerns of middle-class voters.

Rev. Leon and others in the president’s base may be itching to declare victory in the fight with the religious right, but Democrats may learn in 2014 what Republicans learned after 2004: Such triumphs often prove fleeting and sometimes even pyrrhic.