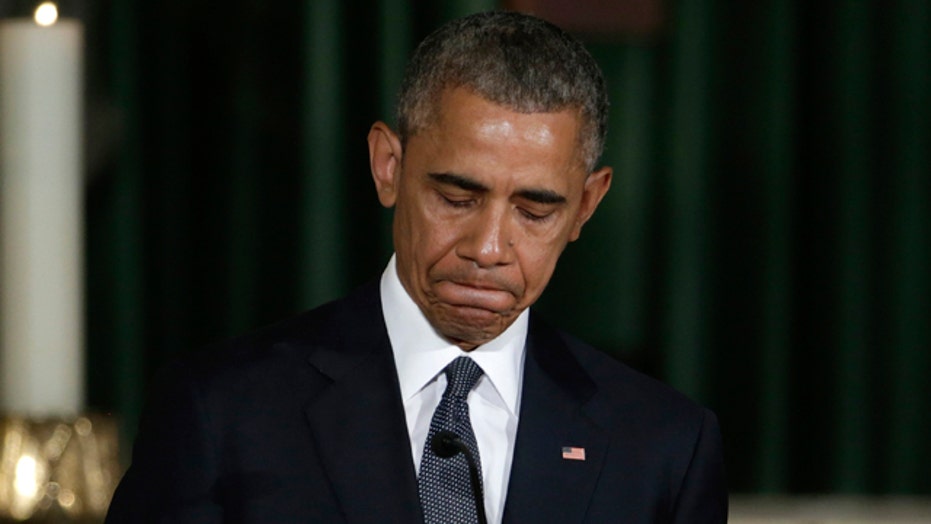 President Obama fought back tears Saturday as he remembered the son of Vice President Joe Biden as the “consummate public servant” who learned through early tragedy what mattered most and resolved to “live a life of meaning.”

Obama choked with emotion during his moving eulogy to Beau Biden which he concluded by saying, “God bless his memory and all he touched.”

“He was a scion of an incredible family who brushed away the possibility of privilege for the harder, better reward of earning his own way,” Obama told a packed St. Anthony of Padua Roman Catholic Church in Wilmington, Delaware.

The president reflected on the “cruel twist of fate” that killed Beau Biden’s mother and infant sister in a car crash four decades ago. The 3-year-old Beau and his younger brother Hunter were injured in the accident.

Out of that tragedy, Obama said, Beau early on “made a grown-up decision” to live a life of meaning that would benefit others.

The crowd of more than 1,000 mourners included first lady Michelle Obama, Bill and Hillary Clinton and other dignitaries.

Obama described Beau Biden as a son, father, a soldier and a politician who didn’t cut corners in his efforts to serve his country and others.

Obama hugged Joe Biden as he walked off the altar at the conclusion of his remarks. The vice-president did not speak during the Mass.

Chris Martin of Coldplay sang his band’s “Til Kingdom Come” at the service. He offered to perform when he heard Coldplay was Beau Biden’s favorite band.

Beau Biden died a week ago from brain cancer at age 46.

Before the Mass began, the vice president bowed his head and wiped away tears before entering the church for his eldest son’s funeral.

Bagpipers played outside the church as mourners arrived.

The song “Bring Him Home” from Les Mserables” filled the church during the procession.

Gen. Ray Odierno, the former top U.S. commander in Iraq, where Beau Biden once served, told the mourners that Beau was a dedicated soldier and selfless friend. Odierno suggested that the presidency could even have been within Beau Biden's reach and spoke of his dedication to "a nation that I believed one day Beau Biden would someday lead."

Saturday’s funeral capped three days of public mourning in which the vice president and his family have been both the consolers and the consoled.

Beau Biden's casket lay in honor in the state Senate chamber on Thursday ahead of a public viewing at St. Anthony on Friday. On each day, seemingly endless lines of people streamed through to greet the vice president.

Saturday's Mass honoring his own son was a reversal of roles of sorts for Biden, who in 2012 spoke of his son's service in Iraq as he comforted a group of grieving military families.

A prominent political figure in his own right, Beau Biden served two terms as Delaware's attorney general before setting his sights on the governor's mansion. Many imagined his career would mirror that of his father, who represented Delaware for decades in the U.S. Senate before becoming vice president.

But in 2010, at age 41, Beau Biden suffered a mild stroke, then was diagnosed with brain cancer three years later. He returned to work after what doctors said was a successful operation to remove a small lesion, but his illness returned, and he died last Saturday -- less than two weeks after being admitted to Walter Reed National Military Medical Center for aggressive treatment.