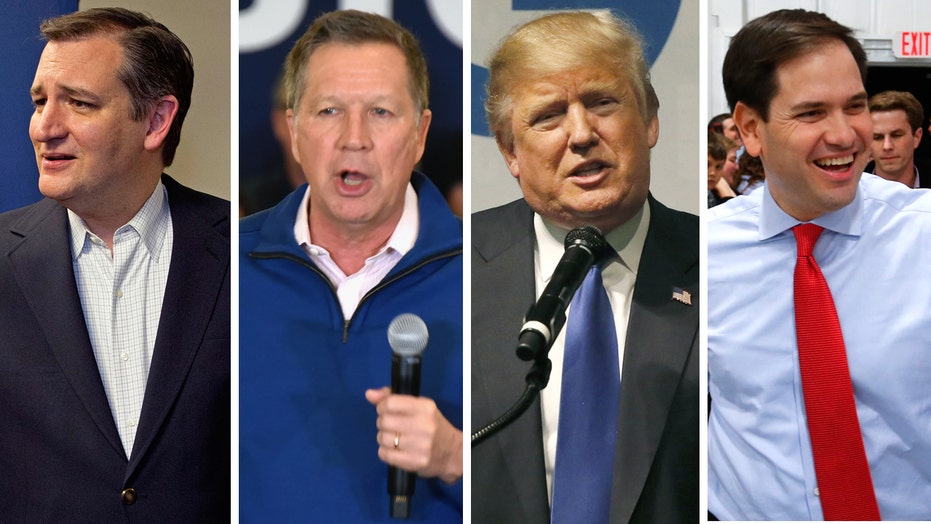 150 delegates up for grabs in Michigan, Idaho, Mississippi, and Hawaii

PRESENTING YOUR MARCH 8 PRIMARY DAY FIELD GUIDE
With slightly more than one-third of Republican delegates allocated, the GOP contest roars into its middle phase today. Four years ago, this was the point at which the GOP frontrunner started to put it away. This time, it’s different.

Contests in Michigan, Mississippi, Idaho and Hawaii will award 150 delegates to the remaining Republican candidates, who are each trying to reach the magic number of 1,237.

All of the states’ reward their delegates proportionally so we can expect something of a split decision. How that split shapes up, though, will provide essential clues about the state of the race as it enters its decisive phase.

Trump needs to do substantially better to win the nomination outright. To get on a good foot, Trump needs to start approaching a 60-percent threshold of all the remaining delegates to avoid a contested convention. Results from five contests over the weekend, however, show Trump going in the wrong direction, grabbing just 31 percent.

Did Thursday’s rough and rowdy debate in Detroit, combined with a new onslaught of character attack ads against Trump and the dire warning from native Michiganian Mitt Romney, have an effect? New national polling suggests some slippage for Trump, but today’s results will tell us even more.

[Watch Fox: Megyn Kelly and Bret Baier bring you the latest results tonight as the polls close at 8 p.m. ET]

MICHIGAN
It was the Great Lakes State that in 2012 helped save Romney from a protracted and even more painful nominating process. Romney pulled off a narrow victory in the state his father had governed, but narrow was enough to dispel concerns about his chances in a two-man race with former Sen. Rick Santorum.

Could it do the same for Trump?

The math is a little different this time in that there are three bidders for Michigan’s delegates: Trump, Kasich and Cruz. In the final pre-election poll, Trump remained ahead, but his margin was shrinking over the other two contenders, with considerable shrinkage the final two days the poll was in the field.

A three-way tussle and a fairly even delegate split would not be helpful for Trump’s efforts to subdue the resistance within his party. Here’s a look at where the contenders will look to try to find a breakout performance:

Michigan is a politically diverse state that has been undergoing massive demographic reordering in the past decade with the collapse of Detroit. But the Motor City metro is still the largest trove of votes in the state by far.

One of the reasons Trump should do very well in Michigan are places like Wayne County, home to Detroit, and Macomb County, to the city’s northeast. Many voters here are the archetypical “Reagan Democrats.” Trump’s message on tariffs, trade and China is a winner with blue-collar, pro-union voters pummeled by successive decades of industrial decline. Plus, his support for government-run insurance programs, federal funding for Planned Parenthood and harsh attacks on former President George W. Bush are no liabilities.

But don’t forget about the minivan set.

Oakland County is home to some very high-end suburbs and has lots of Republican voters -- accounting for 15 percent of the nearly 1 million primary votes cast four years ago. That’s good news for Kasich, who has been blitzing his neighboring state for weeks, and whose nice-guy message and aggressive pragmatism should be a good fit for voters who went almost two-to-one for Romney four years ago.

Cruz, on the other hand, is looking west to the Republican heartland of the state. Western Michigan is loaded with conservative Dutch Reformed Christians and other stalwarts of the right. Communities like Grand Rapids in Kent County and nearby communities could propel Cruz into contention. The Texan’s test will be not just winning in more populous places, but also besting Trump in the many rural counties that account for the rest of Michigan’s vote.

Macomb County (Regan Democrats)
--Population: 860,112
--Median household income: $54,059
--Race: Caucasian, 83 percent; black, 11 percent
--Adults with bachelor’s degrees: 23 percent
--2012 election: Obama 51 percent
--Residents 65 or older: 16 percent
--Named for Detroit-born Alexander Macomb who was accredited for the key victory at the Battle of Plattsburgh in the War of 1812, and was later commanding general of the U.S. Army.

MISSISSIPPI
The Magnolia State should smell so sweet for Trump. Trump crushed the competition in neighboring Alabama – another Deep South state with an open primary – last week. He won almost three-quarters of the delegates with a 22-point victory over his closest competitor.

Trump didn’t fare as well on Saturday in Louisiana, Mississippi’s neighbor to the east, winning just one more delegate than Cruz. Louisiana, though, restricts its Republican primary to party members and was held on a weekend, giving the advantage to high-propensity voters.

His Alabama stomping should be the yard stick by which to measure Trump’s performance in Mississippi today. It is the poorest state in the Union, and has the highest percentage of African American residents of any state. In contests so far, Trump has dominated with economically disadvantaged white voters who live in close proximity to substantial minority populations. Trump ought to be head and shoulders above Cruz.

But if Cruz aims to make things interesting in Mississippi, it will be along the Mississippi River and the Gulf of Mexico, stretching from suburban Memphis in the north down to Biloxi in Harrison County to the south. Cruz’s support from State Sen. Chris McDaniel, the renegade who forced incumbent Sen. Thad Cochran into a bruising runoff in 2014, as well as Gov. Phil Bryant, show signs that the divided state GOP maybe uniting behind Cruz. Should that be the case, Cruz just has to hope that there are not enough white Democrats left in Mississippi to put Trump over the top.

IDAHO
Idaho could make a claim to be the most conservative state in America. Its 32 delegates are nothing to sneeze at, but it gets little electoral attention because of its remoteness and widely dispersed population. This year, however, it has gotten love from Rubio and Cruz who are looking for a win in the closed primary there.

In 2012, Romney romped winning all the delegates, but that can be attributed at least in part to the state’s large Mormon population. That was no impediment to Trump in neighboring Nevada, but the race looks different now and so does the political makeup of the Gem State.

Religious liberty is a big issue here and both Cruz and Rubio have honed in on the subject. But this looks like a better opportunity for Cruz to pull off an outright win.

HAWAII
Republicans are almost as rare in Hawaii as snow days, but they still get to vote and they still get 19 delegates. There were only about 10,000 voters who came out for the closed GOP caucuses four years ago, and they matched the state’s moderate leanings with a big win for Romney.

If Rubio hopes to notch a win tonight it will be in Aloha State.

MY, HOW MINNESOTAN OF YOU
MinnPost: “Within a month Northeast Minneapolis is going to have the first full-fledged water bar of its kind, an establishment where you can sit and drink a variety of local tap waters to your heart’s content. Their delightful motto: ‘Water is all we have’…It’s the culmination of work from a team of Minneapolis social practice artists who specialize in community engagement, and the idea is to start calling attention to the importance of communal water systems. For the next year they’ll be serving Twin Cities waters to the masses and, they hope, starting conversations that could not be more fundamental to our everyday lives.”