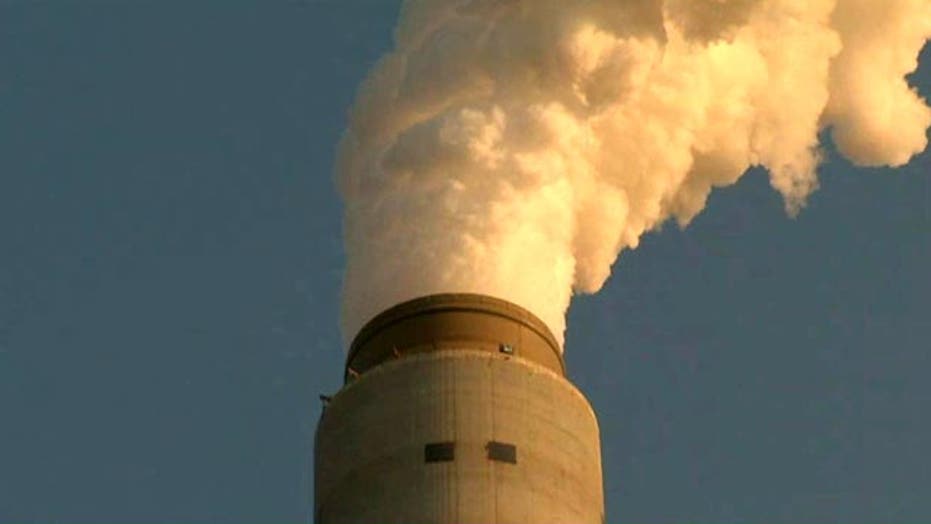 The Obama administration is facing another union rebellion over its environmental policies, this time over the EPA’s proposed rules for limiting power plant emissions.

Labor unions for years have hounded the Obama White House over allegations that officials are dragging their feet in making a final decision on the Canada-to-Texas Keystone XL oil pipeline.

But labor organizations are now piping up regarding an Environmental Protection Agency proposal to cut carbon-dioxide emissions by 30 percent by 2030. The rules are intended to curb global warming.

Last week, Edwin Hill, president of the International Brotherhood of Electrical Workers (IBEW), penned an op-ed claiming the plan would “have a dramatic impact on the American economy but only a minimal effect on global carbon emissions.”

Hill claimed the EPA plan is a “classic example of federal tunnel vision—focusing on a single goal with little heed for the costs and dangers." He predicted the plan would kill roughly “52,000 permanent direct jobs in utilities, mining and rail and at least another 100,000 jobs in related industries” – losses that would fall particularly hard on rural communities.

Plus, as other critics have argued, Hill said the plan would result in the loss of coal-fired electricity, in turn putting the nation’s power grid at risk.

“Replacing the electricity lost as coal plants are closed will require building or retrofitting facilities powered by other sources, the costs of which will be borne by consumers,” he wrote in The Wall Street Journal. Hill appealed to the EPA to, among other steps, “develop a more realistic timetable, softening the economic impact of its rules.”

The IBEW represents more than 700,000 members. Hill’s column follows a statement in June from United Mine Workers of America (UMWA) International President Cecil Roberts, who warned the EPA proposal could result in thousands of lost jobs for coal miners, electrical workers and others.

"Our initial analysis indicates that there will be a loss of 75,000 direct coal generation jobs in the United States by 2020,” Roberts said, adding: "And no one -- no one -- can point to a significant reduction in global greenhouse gas emissions that is guaranteed to come from this rule.”

The EPA, though, has cited an array of benefits from the power plant proposal.

The agency says the plan will lead to “climate and health benefits” worth between $55 billion and $93 billion by 2030, including avoiding thousands of premature deaths and asthma attacks in children. Plus the EPA argues that the proposal could ultimately shrink electric bills and address the “costly effects” of global warming.

As for the impact on jobs, the agency claims that while fossil-fuel jobs will be lost, other jobs will be created. The EPA specifically estimates there may be 32,000 fewer jobs associated with fossil fuels by 2020, but 58,000 new jobs associated with improving efficiency of existing plants and building natural gas-fired and renewable energy plants.

"We believe the United States has to lead on climate change," EPA spokeswoman Liz Purchia said Monday in a statement. "And this plan will spur innovation and investment to help us get there. It means more jobs not less in construction, transmission, clean energy and more. This plan is not about shutting things down -- it's about building things up. Coal will remain a third of our nations' energy makeup in 2030."

The EPA is hearing from all sides of the debate as it continues to weigh public opinion. The agency held hearings in late July in Denver, Washington, D.C., and other cities on the plan.

Utility and coal company representatives said the rules were unclear and unreasonable, and they warned that jobs and communities could suffer. Yet renewable-energy executives said their industry will bring jobs, profits and innovations.

The EPA has received hundreds of thousands of written comments, which will be accepted until Oct. 16.

Three of the top 10 coal-producing states are in the West — Wyoming, Montana and Colorado. Wyoming is No. 1, producing nearly 40 percent of the U.S. total and more than three times as much as West Virginia, the No. 2 state, according to the National Mining Association.

States would have wide latitude in choosing how to meet the administration's goals. That leaves an uncertain fate for some of the West's large coal-fired power plants, including Montana's 2,100-megawatt Colstrip plant. Montana Gov. Steve Bullock, a Democrat, has said at least some of Colstrip's four units could keep operating if the state can cut emissions in other areas.

Even without the new rules, coal plants face increasing pressure from regulators to rein in other forms of pollution. Federal officials said earlier that Arizona's Navajo Generating Station will produce one-third less energy by 2020 and could close by 2044 under a rule aimed at reducing haze-causing nitrogen oxide pollution.