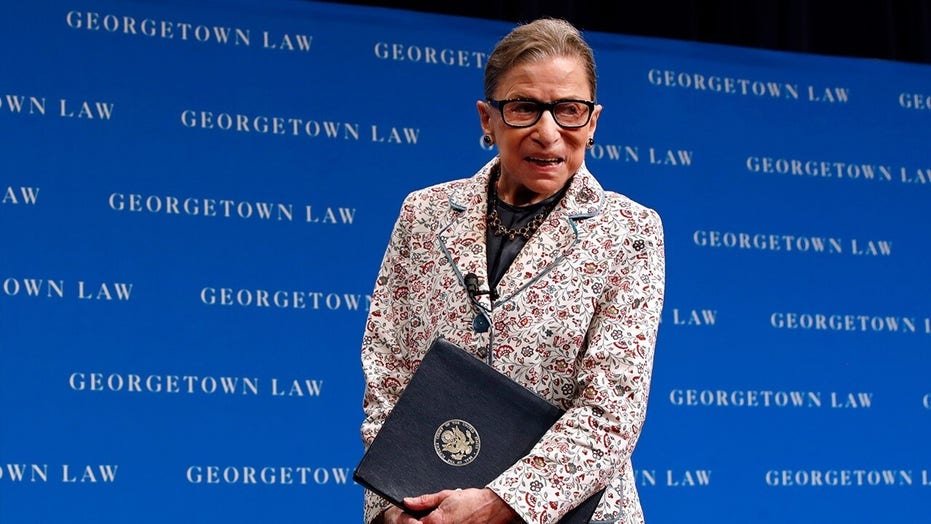 While Senate Majority Leader Mitch McConnell says he intends for President Trump’s nominee to get a vote on the Senate floor, Biden and other leading Democrats say the next president should make the pick.

Based on reporting prior to Ginsburg's death Friday, here are some of the top contenders for the nation's highest court if Biden becomes president.

Biden has pledged to appoint a Black woman to the court if elected. Only five Black women are judges on federal appeals courts around the country, and each is 68 or older this year, according to a Federal Judicial Center database.

This list was compiled from a number of sources, including officials with close ties to the Biden campaign. Recent White House administrations have quickly begun compiling an informal list of possible Supreme Court nominees to consider in the event of a sudden vacancy, but serious vetting only begins when such a vacancy occurs or is announced in advance.

Born in 1967 in India, he was named to the appeals court in 2013 (97-0 vote) and is now chief judge. He was a finalist for the Supreme Court seat that Merrick Garland was nominated for by President Obama in 2016.

The son of Indian immigrants and raised in Kansas, Padmanabhan Srikanth Srinivasan was the principal deputy solicitor general at the Justice Department and argued more than two dozen cases before the Supreme Court. He would be the high court's first Asian-American. He clerked for Republican-nominated federal judges Harvie Wilkinson and Justice Sandra Day O'Connor. Obama called him "a trailblazer who personifies the best of America." Known as low-key, practical, and non-ideological, he may not excite many progressives, nor give conservatives much to dislike.

Fun fact: Justice Elena Kagan (both worked together in the Obama SG's office) has praised him, saying Srinivasan at oral argument "cools it down" with his calm manner.

Born in 1976, the former deputy assistant attorney general in the Obama Justice Department has argued 12 cases before the Supreme Court. Kruger clerked for Justice John Paul Stevens. Given her sterling resume and relative youth, she would be a strong favorite for a Supreme Court seat if Biden holds to his campaign pledge to nominate an African-American woman.

Considered something of a moderate on California's high court, she often been a "swing" or deciding vote in close cases. But state judges rarely receive serious consideration for seats on the U.S. Supreme Court -- the last was Sandra Day O'Connor in 1981. Kruger's parents are both pediatricians; her mother is Jamaican, her father Jewish. She had a daughter in March 2016.

Born in 1967, Watford's age and race (African-American) have made him a favorite among some liberal court watchers. Named to the appeals court in 2012, he was a finalist for the nomination that went to Garland.

Clerked for conservative-libertarian former federal Judge Alex Kozinski on the 9th Circuit, and later for the liberal Ginsburg. He was a former federal prosecutor and law firm partner. Supporters call the Orange County native an ideological moderate, which may not sit well with progressives seeking a stronger liberal voice. But his rulings limiting police discretion in search and seizure cases have been applauded by left-leaning advocates.

Born in 1970. Jackson was appointed to the bench in 2013. She served on the U.S. Sentencing Commission and was a law clerk for Justice Stephen Breyer. A surprising finalist for the seat that went to Garland.

Presided in 2019 over dispute between former White House Counsel Don McGahn and the House Judiciary Committee, which sought to enforce a  subpoena against him. Jackson rejected the administration's claim of "absolute immunity," concluding "presidents are not kings." Jackson may be elevated to a federal appeals court seat before serious consideration again for the high court.

Fun  fact: Her husband, Patrick Jackson, is the twin brother of former House Speaker Paul Ryan's brother-in-law William Jackson. The Wisconsin Republican supported her nomination to her current job:  "Our politics may differ, but my praise for Ketanji's intellect, for her character, for her integrity is unequivocal. She's an amazing person, and I favorably recommend her consideration."

Born in 1963. Named in 2013 to a bench considered a stepping stone to the high court -- where four current justices once served. Formerly a private Washington-based appellate attorney -- President Obama called her "one of the nation's finest" -- who also had more than a decade of experience in the U.S. Solicitor General's office.

Millett argued 32 cases before the Supreme Court, second-most ever for a female lawyer. Sources from both ideological stripes call her fair-minded, no-nonsense and non-ideological. A top contender for the Ginsburg seat.

Fun fact: Her husband is Navy reservist Robert King, whom she met at a Methodist Church singles event.

A former state judge, federal prosecutor and private attorney, Nguyen moved with her family to the United States when she was 10, just after the fall of then-South Vietnam to the Communists. Her parents eventually set up a doughnut shop in North Hollywood.

Born in 1960, Murguia was named to the appeals court by President Obama in 2010, after serving as a federal district court judge in Arizona. The Kansas native is the daughter of Mexican immigrants. Her twin sister is noted civil rights leader Janet Murguia, and her older brother, Carlos Murguia, is also a federal judge.

Born in 1964. She is only the second woman to serve on the St. Louis-based court, appointed in 2013 (96-0 vote). Kelly spent most of her legal career as a federal public defender in Iowa. One of her biggest fans is a fellow Iowan, Republican Sen. Charles Grassley, the ranking member on the Judiciary Committee.

Fun fact: She graduated in 1991 from the same Harvard Law School class as Obama.

Born in 1966. Now a private attorney in Chicago, Madigan was the state's highest law enforcement official from 2003-19. She is the adopted daughter of longtime Illinois House Speaker Mike Madigan. A former state senator, she worked down the hall from fellow lawmaker Obama. She gained national prominence after seeking a motion to have former Gov. Rod Blagojevich temporarily removed from office in 2008. She also argued a search and seizure case before the justices in 2004. Her ties to Obama, political skills and law enforcement background have made her a favorite.

Born in 1967. Barron joined the federal appeals court in May 2014. He formerly served as acting assistant attorney general in the Obama administration, then became a Harvard Law School professor. He clerked for Justice John Paul Stevens.

Being a white male will likely hurt his chances in a Biden administration.

Born in 1963. The Indiana native was raised by a single mother and graduated from Harvard Law in 1989. He filed a civil rights lawsuit in 1992 against the Maryland State Police after being pulled over for speeding, after officers were instructed to focus on young black males when making traffic stops.

Born in 1972 in Mexico. Nicknamed "Tino," Cuellar served in the Obama and Clinton administrations, and is a former academic specializing in administrative law. He is married to federal Judge Lucy Koh (see below).

Born in 1968. Her 2016 nomination to the 9th Circuit federal appeals court expired with the end of the 114th Congress, and President Trump subsequently named someone else to the seat. She may again be nominated to that regional court before getting serious consideration for the high court.

The Oklahoma native is of Korean descent. Koh had been overseeing separate multi-district litigation involving such tech giants as Samsung and Apple. She is married to state Justice Mariano-Florentino Cuéllar (see above).

Born in 1970 and of Taiwanese descent. A former Ginsburg law clerk, Liu helped draft the justice's dissent in Bush v. Gore. Joined the state high court after twice being rejected in 2011 by Senate Republicans for a seat on a San Francisco-based federal appeals court. He was eventually filibustered, after conservatives said Liu was "outside the mainstream," expressing concerns over his past statements on a variety of hot-button topics, such as same-sex marriage and health care reform.

A Liu nomination would be among the most contentious made by a Democratic president.

Born in 1968. She was a law clerk for two Republican appointees, including Justice Anthony Kennedy. Named to her current seat in 2014 by Obama.

Born in 1971.Ruemmler left her government position for private practice in 2014, and is now a private attorney in Washington. As a federal prosecutor, she most famously helped lead the prosecution in the Enron fraud case in 2006. She earned high praise in the White House for helping spearhead legal defense of the health care overhaul bill championed by Obama, whose constitutionality was ultimately upheld by the Supreme Court.

She also shepherded the Elana Kagan and Sonia Sotomayor high court nominations through the Senate. She has no judicial experience, but that wouldn't be a first. President George W. Bush tapped White House counsel Harriet Miers for the Supreme Court, but she later withdrew from consideration.

Born in 1958. Elected in 2018, she became the first African-American and first woman to hold the position. James has been very active filing lawsuits against the Trump administration -- more than 20 in 2019 alone-- over its health care, coronavirus and immigration policies. Some of the litigation has been in coordination with other blue-leaning states.

In August, she sued the Trump Organization, seeking records of its business dealings. Her office also separately sued the National Rifle Association over its finances. Despite support from liberal advocacy groups, her age may preclude her from serious high court consideration, especially since she lacks judicial experience.

Born in 1958.  Left a congressional seat representing downtown Los Angeles that he had held since 1993, to take his current post in 2017. He became the first Hispanic attorney general, succeeding Kamala Harris. Becerra has been very active in suing the Trump administration, especially on immigration matters. Like James, his political savvy and progressive props may be offset by his age and lack of judicial experience, when it comes to a possible Supreme Court nod.

A few members of Congress typically get mentioned on these lists, often as a political courtesy, especially to those senators that would vote on any nomination.

Worthy of consideration are two members of the Senate Judiciary Committee (and former 2020 presidential candidates) who gained national prominence during the Justice Brett Kavanaugh confirmation hearings: Booker (born 1969), the former mayor of Newark and one of three current African-American senators; and Klobuchar, (born 1960), a former county prosecutor and adviser to former Vice President Walter Mondale. Klobuchar was considered as a possible vice presidential candidate with Biden, and has been mentioned as a possible Supreme Court pick since 2009.