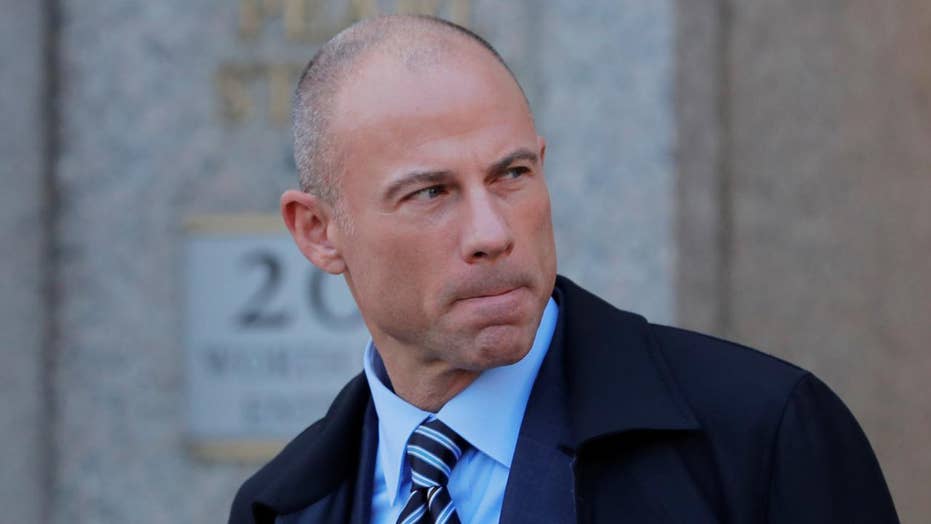 The hotshot attorney has attracted near-universal admiration from CNN and MSNBC for his representation of Daniels, real name Stephanie Clifford, in her legal battle against a non-disclosure agreement involving an alleged 2006 fling with President Trump.

But while the lawyer is being celebrated as a hero for standing up to the president, his wife’s sworn testimony from his divorce alleged a darker side.

“[Avenatti] is hot tempered and used to having his way – when he doesn’t he gets extremely loud and verbally aggressive,” Lisa Storie-Avenatti said in court records obtained by Fox News.

While she has since walked back the allegations, at the time she called him “emotionally abusive” and “harmful” to both her and their 3-year-old son – and requested the court to issue an exclusion order against him, barring him from entering their Newport Beach, Calif., residence, fearing his presence could cause harm.

“The purpose of these exclusion / exclusive use orders is intended to prevent acts of domestic violence and to provide for a separation of the persons involved for a period sufficient to enable them to seek a resolution of the cause of the violence,” court records noted.

Avenatti denied the abuse allegations Thursday, saying “there was never any abuse, alleged or otherwise,” noting that the court never gave credence to the allegations and pointing to the signed stipulation filed in court.

Following the email exchange with Avenatti, Storie-Avenatti also issued a statement backtracking on the allegations she made in court under oath, saying “there was never any abuse, alleged or otherwise, in our relationship.”

The alleged behavior may be another setback for the ubiquitous attorney who suggested his fight against Trump is a victory for women who were silenced by powerful people like the president.

Avenatti has been on a media crusade for months now, pursuing Trump and, more recently, the president's personal attorney, Michael Cohen. Avenatti has appeared on broadcast and cable news nearly 150 times over the past 10 weeks, with 74 of the appearances on CNN, according a Media Research Center report last week.

But amid controversy over his tax issues and a ruling on Tuesday ordering a law firm managed by Avenatti to pay up $10 million to an attorney for failing to honor a settlement deal, he has found himself on defense lately.

Storie-Avenatti, who has been married to the lawyer since 2011, reportedly kicked him out of the house and changed the locks. In court records, she provided examples of Avenatti’s alleged troubling behavior.

In one instance, on Dec. 17, 2017, court records claim, Avenatti appeared outside their former marital residence and “angrily” demanded entry. He allegedly began shouting at his wife and threatened to stay at the house “every night of the coming week” against her consent.

Then, he allegedly started filming Storie-Avenatti with his cell phone and said that he brought his 15-year-old daughter from his previous marriage to act as a “witness.” The wife tried to escape Avenatti’s “incessant tirade” and verbal outbursts, asserting that he was frightening both of the children, according to court records.

Avenatti then allegedly called the police, asking for help to enter the property. Upon arrival, police officers refused his request. They later told Storie-Avenatti to “expect a nasty divorce.”

Avenatti had a different recollection of the incident. He denied to Fox News that there was verbal abuse and said he never threatened to stay in the house against his wife's wishes, though he added that, “if I did, that was my right under California law.”

He said the police were actually supportive of him, but “stated they could not grant me access, but if I wanted to force access I could because I had every right to the home.”

“The statements you are relying on were made in connection with Lisa's failed attempt to get a spousal and child support order of $215,000 a month ordered by the court. That never happened and the Court never gave any credence to her allegations,” Avenatti said.

In another incident, on Dec. 19, Storie-Avenatti detailed a meeting with her husband regarding a Christmas visitation schedule for their child, in which he allegedly threatened her again, saying he would “burn” all their fortune in the divorce. He also allegedly said he would ensure both of them get arrested to ensure their child gets placed in protective custody.

“[Avenatti’s] appalling lack of judgment in bringing his teenage daughter to act as a witness and frightening her in the process, demonstrated that he is a selfish and not child-centered, not to mention the emotional upheaval that he [caused] to Lisa,” an attorney for Storie-Avenatti wrote.

His “follow-up with threats on December 19 that he would intentionally deprive the parties’ son of his mother and primary care giver and cause [their son] to be placed into protective custody further illustrate that [Avenatti] is angry and vindictive, and has no regard for any emotional harm caused to his son, his daughter, or to Lisa,” it added.

Yet, despite the alleged conduct, Storie-Avenatti claims to be having problems legally separating from him.

“I need to be divorced and if [Avenatti] continues to paint the narrative, he can ignore our case!” she told Fox News last week.

According to court records, Avenatti’s “persistent refusal to cooperate” and respond to his wife’s discovery requests -- asking information about his income, assets and liabilities -- is causing a delay in the proceedings.

“This matter can neither settle nor proceed to hearing or trial without accurate and complete assessment of assets and obligations of the parties. Therefore, [Avenatti], by his willful refusal to provide sufficient and compliant responses … is causing needless delay in resolution of this matter,” Storie-Avenatti’s legal team said.

Avenatti declined most requests for information about his finances, claiming the requests were “vague,” “ambiguous,” “overbroad,” and “unduly burdensome and oppressive.” He also claimed some requests were “protected by the attorney-client privilege.” He denied stalling the divorce proceedings.

In an email to Fox News, Avenatti also addressed a number of other allegations laid out by Storie-Avenatti in court documents, despite not being asked about them.

“You are publishing this story as part of your attempt to discredit me and distract away from the serious legal issues surrounding Mr. Trump. You see me and my client as a serious threat to his presidency so you have decided to resort to personal attacks designed to malign us. It will not work,” he wrote in an email.

Avenatti recently publicized information about large corporate payments Cohen received in exchange for "insights" into the young Trump administration, as well as payments from a Russia-linked firm. The details have led to widespread scrutiny of those deals, and brought the lawyer into the national public spotlight.

“Further, he has paid all child support and spousal support. He is a good man. It appears you are trying to harm him and our family by publishing a defamatory story that has no basis in reality.”