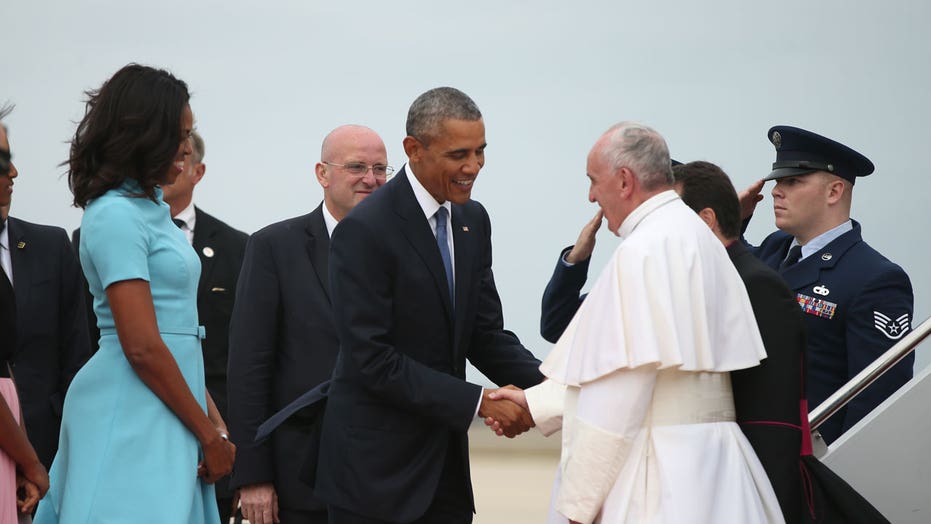 Pope Francis arrives in the US

Pontiff is greeted by President Obama at Joint Base Andrews

Pope Francis, to cheering crowds and a presidential reception, touched down in the U.S. Tuesday afternoon, beginning a historic visit that also will pose a historic security challenge for the officers patrolling his itinerary.

The pope's six-day, three-city visit will be the biggest, multiple-day security event in Department of Homeland Security history.

The Secret Service, whose task is only complicated by Chinese President Xi Jinping’s state visit later this week, will lead the multi-agency operation for the pope’s visit, with DHS declaring it a "national special security event."

Joining the operation are the FBI, Immigration and Customs Enforcement and reportedly as many as 50 other federal, state and local agencies, as the pope makes public appearances in Washington through Thursday before heading to New York and Philadelphia. He is scheduled to leave Sunday. In addition, the Federal Aviation Administration has declared the air space in and around the cities “No Drone Zones” -- warning those who fly or attempt to fly a small, unmanned aircraft that they risk criminal charges.

Federal law enforcement sources told Fox News they have no specific credible threats tied to the pope’s visit. However, Texas GOP Rep. Mike McCaul, chairman of the House Committee on Homeland Security, told ABC News last week that the U.S. law enforcement and intelligence community had uncovered threats to the pope’s visit and thwarted at least one.

Arriving at Andrews Air Force Base on Tuesday afternoon, Pope Francis was greeted by President Obama and Michelle Obama, as well as Vice President Biden and Jill Biden.

The pope on Wednesday will go to the White House and participate in a parade, then make a public appearance Thursday on the West Front of the Capitol. He plans to address Congress on Thursday morning.

He then goes to New York where he will speak at the United Nations headquarters, participate in a parade through Central Park and say Mass inside Madison Square Garden.

The pope’s final two days in the U.S. will be in Philadelphia.

Security officials get little relief as he winds down the visit. The Chinese president will on Friday make an official state visit to the White House, after going to Seattle to meet leaders of U.S. technology companies.

Security measures in Washington were in full view early Tuesday morning, ahead of the pope’s arrival and his public appearances Wednesday -- the parade and events at two Catholic churches. The streets near his temporary Washington residence -- the Apostolic Nunciature of the Holy See, across from Biden’s residence -- were lined with fencing and concrete barriers while vehicles were being re-routed.

On Capitol Hill, the Dirksen Office Building, Upper Senate Park and the public spaces around the Capitol Rotunda were fenced off.

Behind the scenes, the FBI, U.S. Park Police, U.S. Capitol Police and the city’s Metropolitan Police Department were establishing their own command centers to monitor potential threats and to maintain public safety.

The centers will be in addition to the Multi-Agency Communications Center, the hub of the security operation.

Officials for the subway systems in Washington and New York -- the country’s second-biggest and biggest, respectively -- were also tightening security and bracing for large crowds.

Officials are also performing similar security measures around the United Nations headquarters where the pope will meet Friday morning with 170 world leaders and Madison Square Garden, where he will celebrate Mass that evening, among the six scheduled events in New York.

"I am so confident with that structure that we've been able to leverage that I have very little concern," city Police Commissioner William Bratton said Tuesday morning, according to WABC-TV in New York. "We are built to succeed."

City transit officials said their subway system can accommodate 6 million riders daily and that they were prepared for the additional ridership that will come with the pope’s visit.

In Philadelphia, officials have created a “traffic box” in the center city to control traffic and as a security measure. They also reportedly have gone to the extent of closing traffic to major highways and other roadways into the city including Interstate 95 and the Benjamin Franklin bridge.