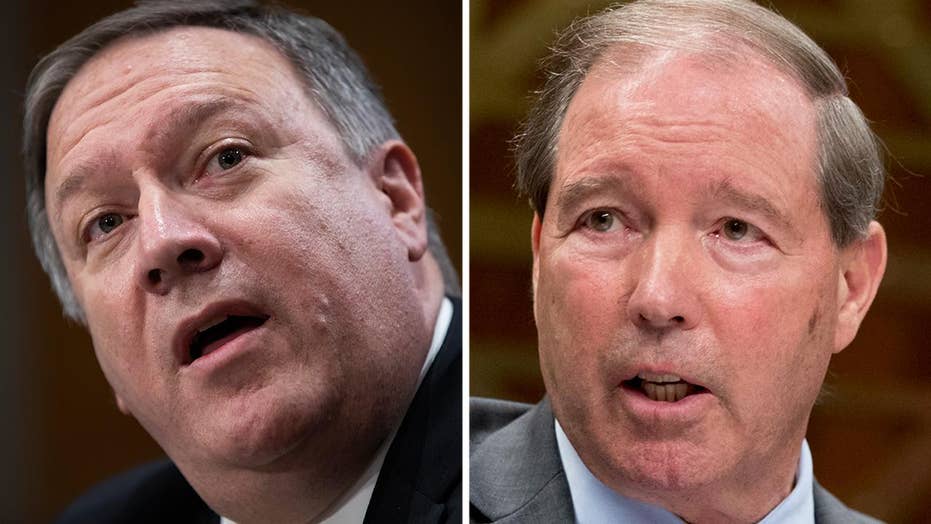 Secretary of State Mike Pompeo lashed out at Sen. Tom Udall, D-N.M., Thursday after the lawmaker asked whether President Trump's foreign policy was guided by "personal conflicts of interest."

"Given that the president refuses to disclose his tax returns," Udall asked Pompeo during a Senate Foreign Relations Committee hearing, "how can you assure the American people that American foreign policy is free of his personal conflicts of interest?"

After a pause, Pompeo told Udall that he found the question "bizarre," to which Udall answered: "You don't want to answer it, then? You just want to describe it as bizarre and not give me an answer?"

"I think that’s indicative of my answer, Senator," Pompeo responded. "I’ve been incredibly involved in this administration’s foreign policy now for some 16 months and I have seen literally no evidence of what you are scurrilously, scurrilously suggesting.

"It is an outrageous suggestion."

Udall shot back that his question was not scurrilous, saying "this has been raised by a number of people out there."

"Yes, sir, yes, sir it has," answered Pompeo with a sarcastic chuckle. "You want me to tell you who those folks are and what their political interest may well be?"

"No, I know, it's fake news," said Udall sardonically.

The exchange was a notably contentious moment during a hearing that focused on the cancellation of a planned summit between Trump and North Korean dictator Kim Jong Un.

Trump was repeatedly criticized during the 2016 election campaign for not releasing copies of his tax returns. At the time, Trump claimed his returns were under audit by the Internal Revenue Service (IRS), and said he’d release them once the review was complete.