President Trump's name appears on dozens of buildings worldwide, but if the leader of Poland has his way, properties like Trump Tower and Trump International Hotel may soon be joined by a conspicuously named military installation: Fort Trump.

Speaking with Trump and reporters in the Oval Office on Tuesday, Poland's president, Andrzej Duda, told Trump that he'd like the U.S. to create a permanent military base with that name in Poland -- and that Poland would pay more than $2 billion for the project.

Duda emphasized that his country was "willing to make a very major contribution to the United States to come in and have a presence in Poland."

Trump said he would consider the proposal. Facing Russia's increased military activity in the region, Poland has been pressing for the 3,000 U.S. troops now deployed in Poland on a temporary, rotating basis to be upgraded to a larger, permanent presence.

A 1997 NATO-Russia agreement technically forbids U.S. or NATO troops from being permanently based in former Warsaw Pact countries, including Poland. Over the summer, the U.S. ambassador to NATO told Chris Wallace on “Fox News Sunday” that the Trump administration was considering the move anyway.

"We look at all offers made like that, but no decision is being made right now. But looking at it, yes," the ambassador, Kay Bailey Hutchison, a former U.S. senator from Texas, said on the program.

Poland is one of five NATO nations that meet coalition guidelines that call for each member country to spend 2 percent of GDP on defense. Trump has hammered other NATO countries for not meeting that guideline; the fact Poland does meet the requirement was a key reason for Duda's warm welcome at the White House, officials said. 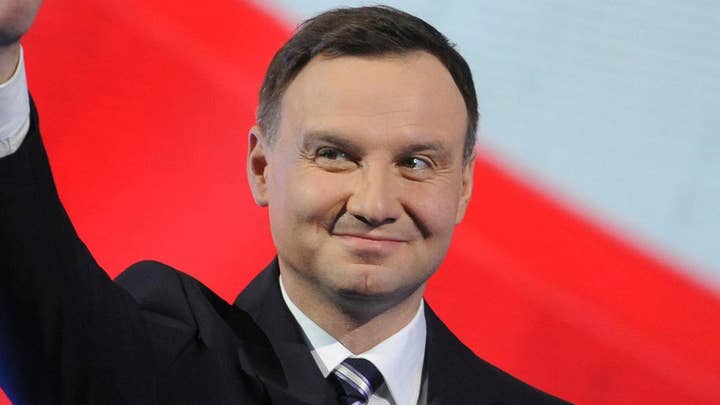 Although Tuesday marked Duda's first visit to see Trump in the White House, talks have been underway for months to make the base a reality. In May, Polish Defense Minister Mariusz Blaszczak told state Radio 1 he had held talks in Washington about having a permanent presence of U.S. troops in the country.

Last month, Duda said that a U.S. base in Poland would "scare away every potential attacker" during a massive military parade that featured Polish and U.S. troops.

Russia's annexation of the Crimean Peninsula from Ukraine has caused anxiety in Poland and elsewhere, as Moscow has continued to support separatists in eastern Ukraine. U.S. and NATO troops were deployed to Poland and the region last year as a security assurance.

Russia has taken other steps seen as hostile in the region in recent years, and a Dutch-led investigation revealed earlier this year that a Buk missile from a Russian military unit brought down Malaysia Airlines Flight 17 over eastern Ukraine in 2014.  The passenger jet was on its way to Malaysia from Amsterdam when it was blown out of the sky over Ukraine on July 17, 2014. All 298 passengers and crew were killed.

POLAND HOLDS MILITARY PARADE, CALLS FOR MASSIVE US ARMY BASE AS DETERRENT TO RUSSIA

Syrian forces'  downing of a Russian military spy plane over the Mediterranean on Monday further escalated tensions between Russia and a key U.S. ally, Israel, which Russia has  blamed for the episode.

Trump said on Tuesday that he and Duda had agreed to bolster defense, energy and commercial ties. And he has said that the alliance between the two countries has "never been stronger."

AP (U.S. troops arriving at the Zagan base in western Poland as part of deterrence force last year..)

Duda credited Trump for making Warsaw the first stop on the U.S. president's inaugural European trip last year, and said Trump's speech was a "very important moment" for the relationship between the two countries.

On energy, Trump reiterated his sharp criticisms of the proposed Nord Stream 2 natural gas pipeline from Russia to Germany, which he has dubbed a major, hypocritical giveaway that affords Russia tremendous strategic control over the region at a time when U.S. allies insist Russia is a major geopolitical threat.

Calling the pipeline a "very bad thing for the people of Germany," Trump said the U.S. would hike liquefied natural gas (LNG) exports to Poland to help ensure energy independence and security in the region.

"A tremendous amount of LNG will be exported to Poland," Trump said, after noting that "it's very unfortunate for the people of Germany that Germany is paying billions and billions of dollars for their energy to Russia; I can tell you the German people don't like it."

Trump added: "The United States and Poland are deeply committed to energy diversity all across Europe. ... No nation should be dependent upon a single foreign supplier of energy. Poland has worked tirelessly to increase energy independence nationally and across central Europe."

In a twist highlighting the delicate balance of international trade and politics, experts have warned that Trump's ongoing tariff back-and-forth with China may have indirect effects on that proposal, as China could potentially impose bruising taxes on LNG coming to the country from the U.S.