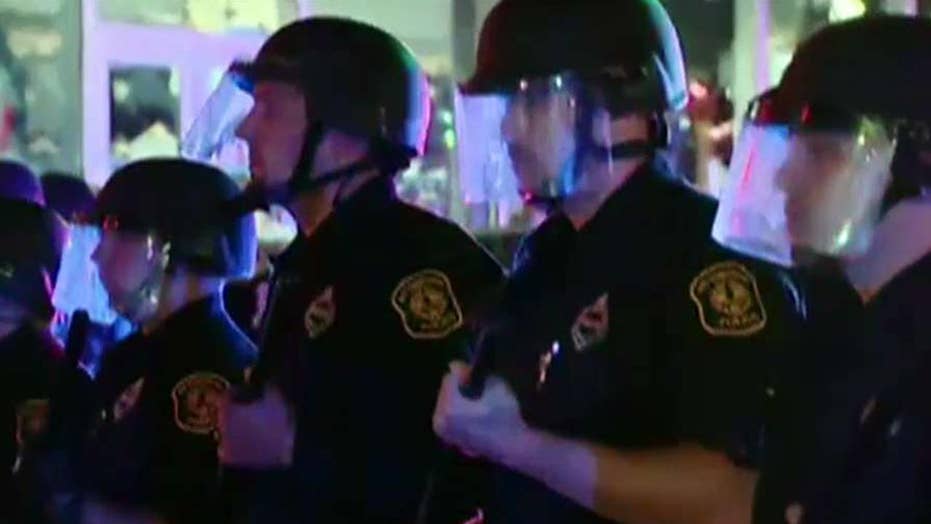 4 arrests made during police shooting protest in Pittsburgh

Demonstrators marched to protest the killing of an unarmed black teenager.

EXCLUSIVE: A Pittsburgh man pleaded guilty Tuesday in federal court to a charge of obstruction of law enforcement during civil disorder after destroying a police vehicle during protests over the death of George Floyd in May, Fox News has learned.

The Justice Department told Fox News the incident took place on May 30 in downtown Pittsburgh. Bartels, according to officials, was part of a large crowd of protesters and approached an unoccupied Pittsburgh Police SUV.

Brian Bartels, 20, pleaded guilty Tuesday in federal court to a charge of obstruction of law enforcement during civil disorder after destroying a police vehicle during protests over the death of George Floyd in May. (DOJ)

Officials told Fox News Bartels removed a can of red spray paint from his backpack and sprayed an “A” on the police vehicle. Bartels then, according to officials, jumped on the hood of the vehicle, sprayed more paint, stomped on the windshield and broke it.

“Armed with his homemade agitator toolkit, this self-identified extreme left-wing anarchist came to protest in downtown Pittsburgh that day with one goal: to incite violence,” Brady said. “Bartels succeeded—he was the first to incite violence during the protest.”

Brady added: “While protesters yelled for him to stop, Bartels spray painted and then smashed and jumped on the windshield of a Pittsburgh police cruiser. Others then joined in and the cruiser was set on fire and destroyed.”

Brady said that Bartels’ actions “were the inflection point in the demonstration,” adding that what began as “peaceful became lawless.”

“The violent actions of this young person were appalling,” FBI Pittsburgh Special Agent in Charge Michael Christman said Tuesday. “Mr. Bartels went downtown with the intent to incite panic and violence. His poor decisions put everyone, including those exercising their First Amendment rights peacefully, in danger.”

He added: “Let this guilty plea sent a message to others that we will use all of our investigative resources to bring justice to those who choose to participate in criminal activity.”

According to the Justice Department, Bartels admitted to his conduct and “expressed remorse and regret for it.”

Bartels was charged federally in a criminal complaint on June 5 and indicted by the federal grand jury on June 9.

Bartels, on Tuesday, pleaded guilty to one count before Senior U.S. District Judge Arthur Schwab, who set his sentencing date for Jan. 27, 2021.

Bartels maximum total sentence would be five years in prison, a fine of $250,000 or both.