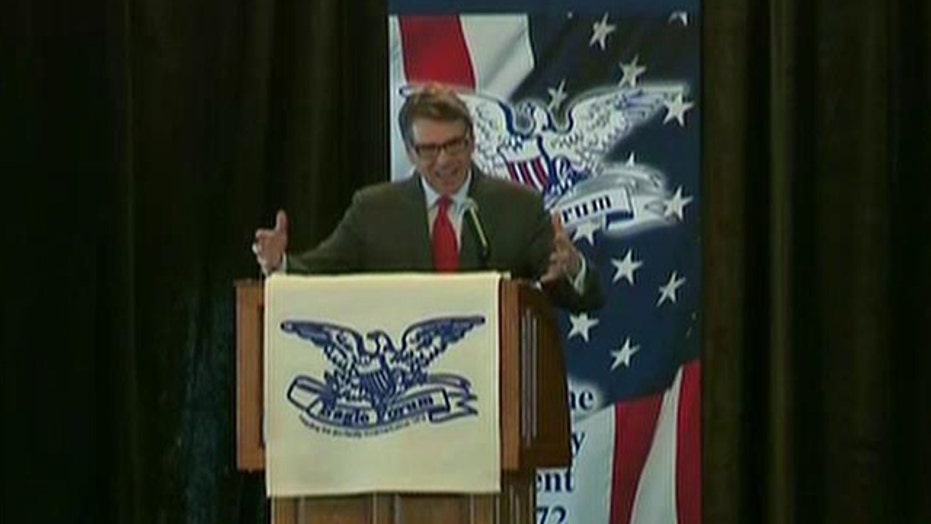 The longest-serving governor in Texas history announced his decision during a speech Friday night in St. Louis before conservative activists.

"I am suspending my campaign for the presidency of the United States," Perry said.

Perry, who also ran in 2012, has struggled to get his campaign off the ground, finding himself strapped for cash and stuck in polling at near 1 percent.

In his St. Louis speech, Perry took some parting, albeit veiled, shots at primary front-runner Donald Trump, saying the eventual nominee "must make the case for the cause of conservatism more than the cause of their own celebrity."

But he went on to say, "We have a tremendous field of candidates -- probably the greatest group of men and women -- I step aside knowing our party is in good hands."

He said the party must "listen to the grassroots, listen to that cause of conservatism."

With the campaign crunched for cash, Perry's‎ senior staff had been volunteering for the past month.

Asked what led to Friday's decision, Perry communications adviser Lexi Stemple told FoxNews.com ‎Perry's team was behind him "all the way" and it was "his decision in the end."

But she also said: "Finances are never simple when there are 17 candidates, quality candidates, in a presidential race. It's very expensive to run for president, and even more so with so many people in the race."

Stemple noted Perry had acknowledged it was a "difficult path forward to the nomination after finances became an issue" but said he campaigned hard even after that point.

Perry is the first major candidate to bow out, leaving the field of Republicans at 16 candidates, just days before the next GOP debate.

His former GOP opponents were quick to praise him once he announced he was leaving the race. Donald Trump tweeted that Perry was "a terrific guy and I wish him well." Dr. Ben Carson's statement, delivered via his press secretary, described Perry as a "very decent and fine gentleman" while Jeb Bush tweeted, "Amen. God bless Rick Perry for his continuing commitment to that cause."

At the lead-off GOP debates in August, Perry's polling left him in the undercard debate, but former HP head Carly Fiorina stole the spotlight in that event. She has climbed in the polls since; Perry has not, and was again relegated to a pre-debate forum at next week's debate at the Reagan Library outside Los Angeles.

He still delivered a stronger performance at that first debate than he did four years ago, when he couldn't remember the third federal agency he'd promised to close if elected and muttered, "Oops" -- a moment that doomed his bid in 2012. But few noticed in a GOP campaign dominated by billionaire Donald Trump, who stole away Perry's Iowa campaign chairman after Perry was forced to suspend paying members of his staff as his campaign fundraising dried up.

A group of super PACs, largely funded by three big Perry backers, briefly kept him afloat by raising $17 million, hiring their own Iowa staff and producing television and digital ads and mailers. His decision Friday appeared to come as a surprise to those groups.

A pro-Perry super PAC emailed its supporters Friday morning saying it was back on television in Iowa to promote his candidacy. A Twitter message from the group sent later in the morning further emphasized, "In It For the Long Haul."