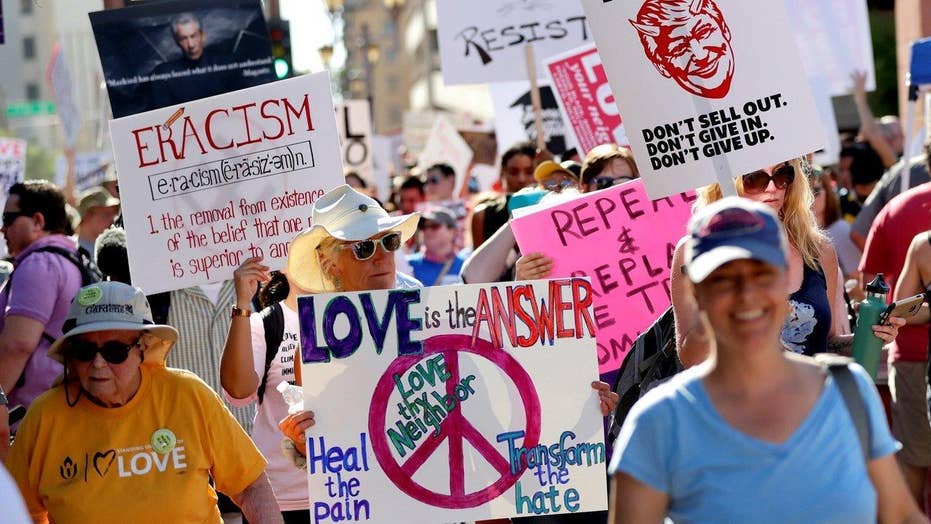 President holds campaign-style rally in Arizona; reaction and analysis on 'The Five'

What began as a generally peaceful gathering of protesters outside President Donald Trump’s rally in Phoenix on Tuesday turned disorderly after the event, prompting police to fire tear gas and pepper spray into the crowd, authorities said.

Some of the protesters had "begun throwing rocks and bottles at police," Phoenix police spokesman Jonathan Howard said.

Despite the post-rally commotion, there were no immediate reports of arrests or injuries.

Phoenix Mayor Greg Stanton had asked Trump to postpone the event, which was Trump's first rally since the violent protests in Charlottesville, Va., and Trump's controversial "on both sides" remarks that followed.

Police were on high alert throughout the day, using barricades to separate protesters from Trump supporters. 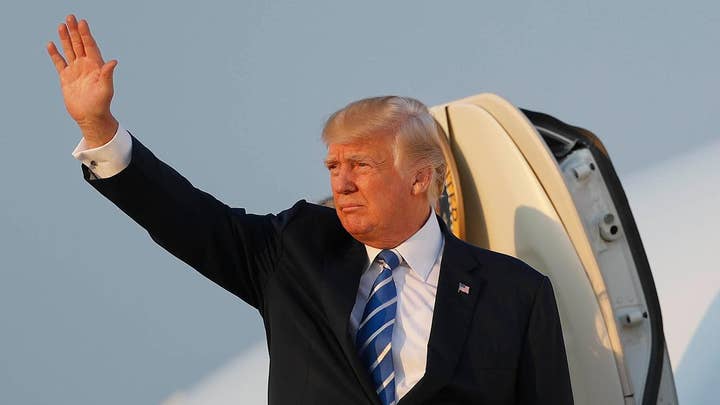 Rally attendees were booed as they left the Phoenix Convention Center, according to Twitter user Halie Chavez.

Earlier in the day, the scene was noisy, but largely peaceful.

As a police helicopter hovered overhead, officers wearing riot gear and carrying rifles sauntered through the lane between the sides.

"Toxic Trump," read one protest sign held up to the president's supporters streaming into the convention center. "Lock Him Up!" read another, a reference to earlier campaign chants by Trump and his backers about his election rival Hillary Clinton.

Dillon Scott of Phoenix, who voted for Clinton, said he came out to express dissatisfaction with how long Trump took to denounce racism after the Charlottesville violence.

"No one should be allowed to get away with what he gets away with, especially in political office," Scott said.

As the line to get in the venue moved ahead, the two groups shouted at each other and some skirmishes broke out. At one point, a Trump supporter and protester shoved each other.

John Brown, of an anti-Trump group calling itself the Redneck Revolt, wore military fatigues and had an AK-47 rifle strapped to his chest as he and a half-dozen others from the group stood about 30 feet behind the barricade for protesters. He said they were there to protect Trump opponents and stand up to fascism. "He's offensive to me in every way," Brown said.

Local political leaders had urged the demonstrations to be calm, with Mayor Stantion saying he expected the protests to be "civil, respectful and peaceful." Phoenix Police Chief Jeri Williams added First Amendment rights would be supported but criminal conduct would be swiftly addressed.

Meanwhile, several hundred Trump supporters lined up at the convention center, with some arriving before dawn for the 7 p.m. rally.

Trump backer Randy Hutson, a retired Phoenix police officer, began standing in line more than seven hours before the speech was to start. "He is the first president I feel in my lifetime that speaks his mind and speaks from the heart," Hutson said. "He says what needs to be said."

"It's been on a bucket list of mine, since he became the president," said Kingman resident Diane Treon, who arrived at 4 a.m. "I wished I had attended one of his campaign rallies before he became president and I wanted to go to the inauguration. And truthfully it was the protests that kept me away."

Treon said she wishes protesters "would be a little more peaceful instead of violently rioting, which is happening in so many places" but isn't overly worried.

"I don't think the Phoenix Police are going to stand down and throw us out in the wind," she said. "I really think they're going to keep us safe."