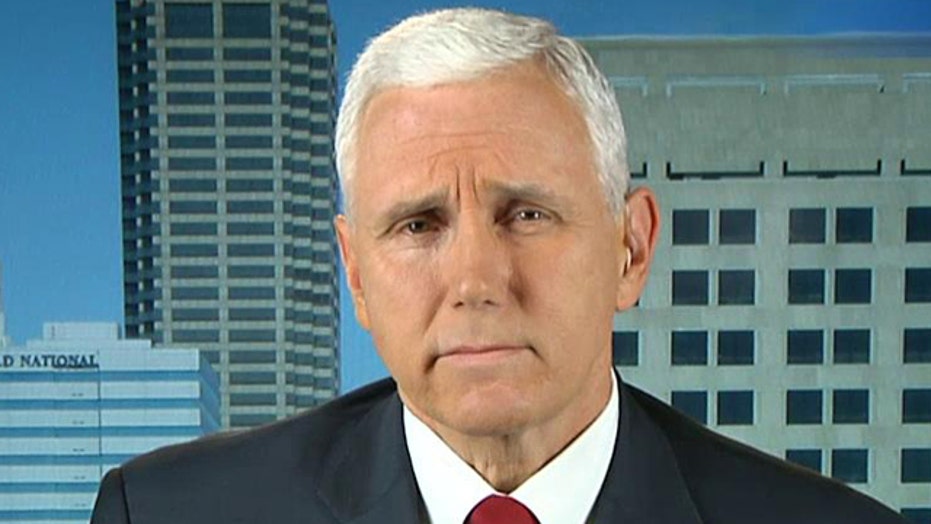 Indiana governor sounds off about the backlash

Indiana Gov. Mike Pence, whose state is under fire over the passage of a religious freedom law that critics say could allow businesses to discriminate based on sexual orientation, said Tuesday that he and legislative leaders plan to clarify the policy in the coming days.

Pence said he stands by the law and there was never any intent to create a "license to discriminate." But, acknowledging the furor over the policy, he said: "We'll clarify that in the days ahead, and we'll fix this and move forward."

Pence later held a press conference in Indianapolis calling for legislation on his desk "before the end of this week" that would make clear the law does not allow businesses "to deny services to anyone."

"We've got a perception problem here ... and we intend to correct that," Pence said at the news conference.

The governor's statements put him in line with Indiana legislative leaders, who on Monday said they would look at clarifying the law to make clear it does not permit discrimination against gays, lesbians, transgenders and others. The effort is the latest attempt to quell a firestorm that has led two governors to ban publicly funded travel to the Hoosier State and threatens to overshadow this weekend's NCAA men's basketball Final Four, which will be held in Indianapolis.

As signed by Pence last week, the measure prohibits state laws that "substantially burden" a person's ability to follow his or her religious beliefs. The law's definition of "person" includes religious institutions, businesses and associations -- triggering accusations that it might let businesses deny service.

"What we had hoped for with the bill was a message of inclusion, inclusion of all religious beliefs," Republican House Speaker Brian Bosma said Monday. "What instead has come out is a message of exclusion, and that was not the intent."

Bosma acknowledged a major concern is whether businesses will now be legally permitted to deny services to some people as a result of the law, and noted that even he was unclear about whether that was the case.

"We don’t believe that will be the effect,” he said. “We are looking at options to clarify that that's the case."

Pence, speaking with Fox News, maintained that the law is not discriminatory. He stressed that it "mirrors" one signed by President Clinton in 1993 and policies in effect, either by statute or court decision, in roughly 30 states. The business provision, however, made Indiana's unique -- critics also pointed out Indiana does not have a law explicitly banning discrimination based on sexual orientation.

Pence said he understands that, given the way some have "mischaracterized" the law, it may be "necessary for us to clarify the law in legislation." He said officials were working into the night Monday night to "consider" ways to do that.

Nevertheless, some Democrats are calling for an outright repeal while even some Republicans voice concerns.

Indianapolis Mayor Greg Ballard, a Republican, said the law threatens to undermine the city's economic growth and reputation as a convention and tourism destination and called for lawmakers to add protections for sexual orientation and gender identity to Indiana civil-rights laws.

"I call upon Governor Pence and the Indiana Legislature to fix this law. Either repeal it or pass a law that protects all who live, work and visit Indiana. And do so immediately. Indianapolis will not be defined by this," Ballard said.

After a two-hour private meeting of House Republicans, Bosma said Monday that repealing the law isn't "a realistic goal at this point."

"I'm looking for a surgical solution, and I think the least intrusive surgery is to clarify that (the law) cannot be used to support the denial of goods, facilities or services to any member of the public," he said.

Pence, who defended the law during a television appearance Sunday, canceled scheduled appearances Monday night and Tuesday, in part because of planned protests.

In an essay for The Wall Street Journal, Pence said "the law is not a 'license to discriminate'" and reflects federal law. But the Affordable Care Act, he said, "renewed concerns about government infringement on deeply held religious beliefs."

"Faith and religion are important values to millions of Indiana residents," he said. "With the passage of this legislation, Indiana will continue to be a place that respects the beliefs of every person in our state."

Meanwhile, sports officials planned an "Indy Welcomes All" campaign ahead of this weekend's Final Four games. The NCAA, which is based in Indianapolis, has repeatedly expressed concerns over the law, with organization President Mark Emmert saying "We are especially concerned about how this legislation could affect our student-athletes and employees. We intend to closely examine the implications of this bill and how it might affect future events as well as our workforce."

"Seattleites know that discrimination has no place in our city," Murray said in a statement. "That’s just equality 101."

Other elected officials have jumped on the backlash. Virginia Gov. Terry McAuliffe issued a letter to Indiana corporations saying Virginia is a business-friendly state that does "not discriminate against our friends and neighbors," while Chicago Mayor Rahm Emanuel sent letters to more than a dozen Indiana businesses, urging them to relocate to a "welcoming place to people of all races, faiths and countries of origin."