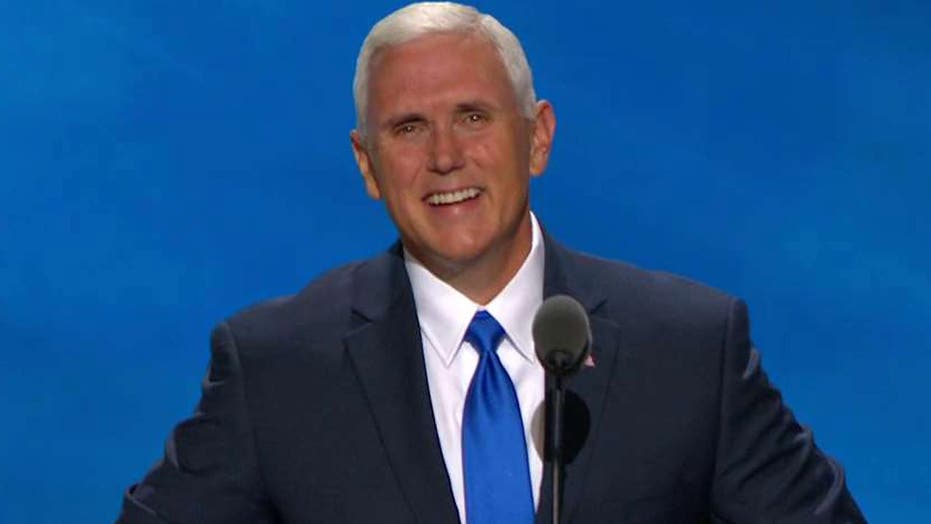 Pence: This team is ready and will make America great again

CLEVELAND – Mike Pence quickly accepted the Republican vice presidential nomination and then showed why Donald Trump picked him as his running mate, harkening to his Midwestern roots to appeal to GOP voters to unite against Hillary Clinton – rallying the faithful ahead of Thursday night’s crowning of Trump as the party standard-bearer.

The Indiana governor dubbed the presumptive Democratic nominee “America’s secretary of the status quo,” and called 2016 a “time for choosing.”

His address was the rally point Republicans were hoping would come from Trump’s ex-primary rival Ted Cruz, who faced angry boos from the crowd Wednesday night as he stopped short of an endorsement in his own prime-time speech.

Technical glitches with the arena’s monitors also created some problems. But Trump soon entered the arena, his son Eric delivered a speech returning the focus to the party’s presidential nominee – and former House Speaker Newt Gingrich delivered a rousing address to set the stage for Pence.

Gingrich even effectively delivered an endorsement on Cruz’s behalf. He told the restless crowd that since Cruz told Americans to vote their conscience for anyone who can uphold the Constitution, there’s only one choice.

“So, to paraphrase Ted Cruz,” Gingrich said, “if you want to protect the Constitution of the United States, the only possible candidate this fall is the Trump-Pence Republican ticket.”

Drawing a sharp contrast between Trump and Hillary Clinton, Pence then echoed the message of party leaders the night before: It’s Trump or Clinton in November, so pick a side.

“The choice couldn’t be more clear. Americans can elect someone who literally personifies the failed establishment in Washington, D.C., or we can choose a leader who will fight every day to make America great again,” Pence said.

He added, “It’s change versus status quo, and my fellow Republicans, when Donald Trump becomes president of the United States of America the change will be huge.”

Pence appealed to voters Wednesday to “resolve here and now that Hillary Clinton will never become president of the United States of America.”

Calling Trump the “genuine article” and a “winner” who “never backs down,” he also said Trump is the candidate to confront radical Islam, cut taxes, grow the economy, shrink the bureaucracy, enforce immigration law and appoint Supreme Court justices who will uphold the Constitution.

While Pence, met with chants of “We like Mike,” made an impassioned case for the billionaire businessman, all eyes were on Cruz Wednesday night amid speculation over whether the Texas senator would use the convention dais to formally endorse his former rival.

He didn’t. His only mention of Trump was to congratulate him.

Still, his speech included a few nods to Trump’s message, including a call to build a border wall. His appearance at all on the Cleveland stage represented a reconciliation of sorts, and even without an endorsement, he appealed to voters to get to the polls.

“To those listening, please, don’t stay home in November,” he said. “If you love our country … stand and speak, and vote your conscience, vote for candidates up and down the ticket who you trust to defend our freedom and to be faithful to the Constitution.”

The carefully worded speech was delivered at a time when Cruz is widely believed to be positioning himself for another presidential run, be it four or eight years down the road. He is no doubt mindful that a full-throated endorsement of Trump could haunt him in the next cycle – and it seemed unlikely by Wednesday morning he would deliver one, when Trump campaign manager Paul Manafort offered no expectation of that happening.

The non-endorsement reflected the nastiness of their own primary battle, one that saw Cruz and Trump square off all the way into May in a rivalry replete with name-calling and trash-talk.

Some delegates in the convention hall remained loyal to Cruz to the end, and he received the second-highest tally during the formal nomination proceedings Tuesday night.

Cruz centered his remarks Wednesday around what he called a “return to freedom.”

“Freedom means that every human life is precious and must be protected,” he said. “Freedom means Supreme Court Justices who don’t dictate policy, but instead follow the Constitution.”

Afterward, delegate reaction was mixed. One North Carolina delegate who spoke to FoxNews.com voiced disappointment with how Cruz was treated.

A Texas delegate said Cruz “hurt” the party by not endorsing.

A source close to Cruz responded to GOP officials who criticized the non-endorsement.

Another ex-primary candidate Marco Rubio made a brief appearance, via video message, right before Cruz spoke, saying, “The time for fighting is over.”