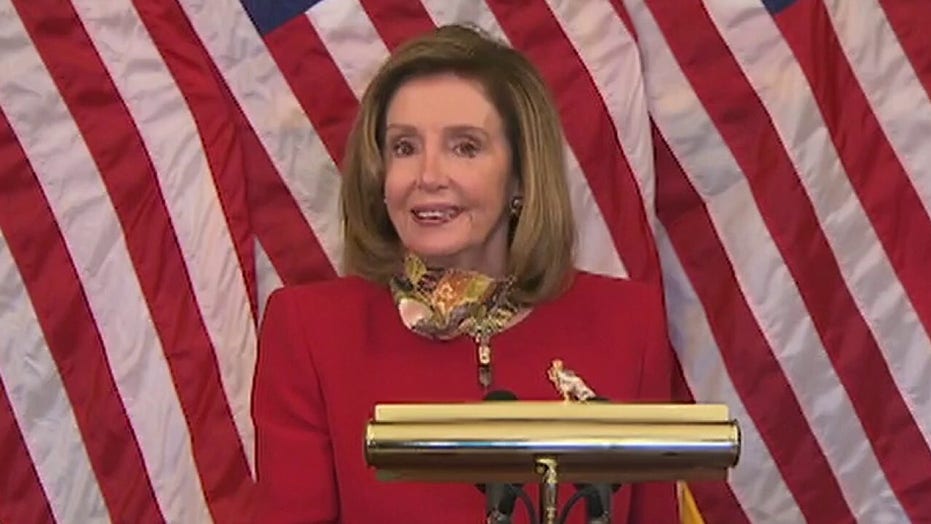 Pelosi doubles down on demand for $2.2T coronavirus relief

Some lawmakers are pushing for economic aid to airlines amid the coronavirus pandemic; Chad Pergram reports.

House Speaker Nancy Pelosi on Friday reiterated her hard-line demand for a $2.2 trillion coronavirus relief package, snapping at a reporter who asked why she would not support a smaller bipartisan bill introduced earlier in the week.

"Just go read my statement," Pelosi said after a New York Times reporter asked what specifically she did not like about a $1.5 trillion plan released by the Problem Solvers Caucus on Wednesday.

The 50-member bipartisan group, evenly divided between House Republicans and Democrats, unveiled the compromise amid a monthlong impasse between the two parties over how much the next aid package should cost.

The bill would include a fresh round of $1,200 stimulus checks, expanded federal unemployment aid at $450 per week until states could adopt a more complicated system that would provide up to $600 a week (as long as it didn't exceed a worker's former salary), reopen the Paycheck Protection Program and provide additional funding for state and local governments.

Pelosi panned the legislation and rejected calls from moderate Democrats to hold a vote on the smaller relief bill.

Eight Democratic committee chairs said in a statement the legislation "falls short of what is needed to save lives and boost the economy."

"When it comes to bolstering the public health system, supporting state and local governments, and assisting struggling families, the Problem Solvers' proposal leaves too many needs unmet," the statement said.

Democrats have offered to come down to $2.2 trillion from the roughly $3 trillion HEROES Act, which the House passed in May. But the White House and Republican leaders want to keep the price tag closer to $1 trillion amid growing concerns among some lawmakers over the nation's ballooning deficit, which is projected to hit a record-shattering $3.3 trillion this year, according to the Congressional Budget Office.

Aked whether she was allowing perfect to be the enemy of good by holding out for $2.2 trillion, Pelosi said Friday: "It's not perfect. Perfect is $3.4 trillion."

Rep. Max Rose, a New York Democrat who flipped a Republican seat during the 2018 midterm elections, urged Democrats and Republicans to back the bill, saying that Americans are "sick and tired of politics."

"To the leadership, we said this very simple message: It's time for you to stop playing games. Let's stop the charade. Let's stop this stupidity. Let's put the country first," he told Fox News.

President Trump has expressed support for the $1.5 trillion plan.

“I like the larger amount, I’ve said that,” Trump said during a White House press briefing. “Some of the Republicans disagree, but I think I can convince them to go along with that because I like the larger number. I want to see people get money.”

Congress is scheduled to be in session through early October.

It must also pass a spending bill to avert a government shutdown at the end of September.