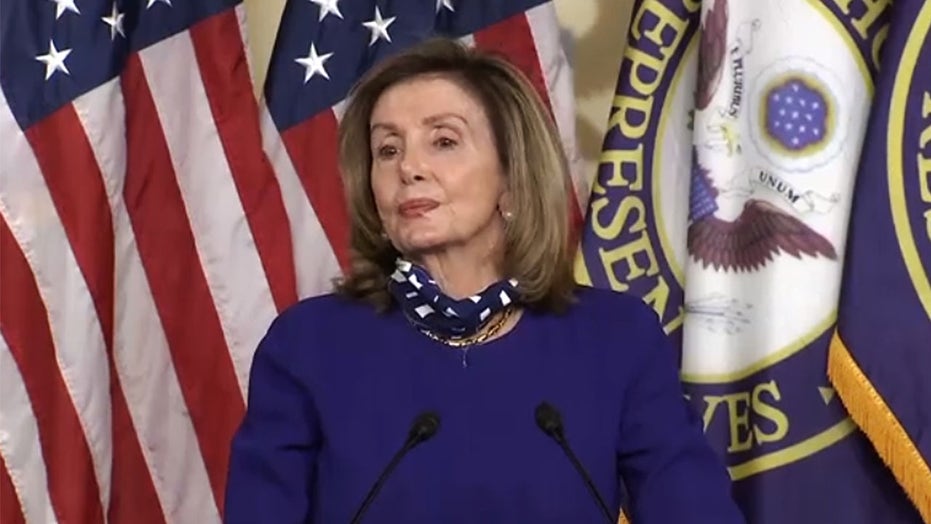 "I don't think that there should be any debates," Pelosi said out of the blue at a news conference at the Capitol, saying she doesn't want the debates to be "an exercise in skullduggery."

"I wouldn't legitimize a conversation with him, nor a debate in terms of the presidency of the United States. Now I know that the Biden campaign thinks in a different way about this."

Indeed, Biden told MSNBC Thursday he's still planning on showing up to the high-profile faceoffs with the president.

"As long as the [debate] commission continues down the straight and narrow as they have, I'm going to debate him," Biden said, adding that he'd call out any Trump lies in real-time.

"I’m going to be a fact-checker on the floor as I’m debating him," he added.

Pelosi is the latest high-profile Democrat to offer a major piece of advice to the former vice president. Earlier this week, former 2016 Democratic nominee Hillary Clinton said Biden shouldn't concede the race under any circumstances.

Republicans pointed to Pelosi's remarks as another sign that Democrats are trying to hide Biden.

Michael Ahrens, communications director for the Republican National Committee, said Democratic leaders are advising Biden to not debate, not to leave the basement and not to concede. "Odd way to project confidence in your nominee," he tweeted.

Trump campaign communications director Tim Murtaugh questioned whether Democrats were laying the groundwork for a video conference debate so Biden could be assisted by "his handlers."

“We are also concerned that his handlers will ultimately decide to keep him in his basement and avoid debates entirely or suggest holding them remotely via Skype, where Biden could rely on nearby handlers, a teleprompter, or notes," Murtaugh said in a statement. "These possibilities would be unacceptable and an affront to voters.”

Debates have been an issue of contention for weeks as the Trump campaign has pushed for an additional early debate to coincide with early voting that will be underway in states. And the idea of abandoning debates all together made headlines after a New York Times op-ed earlier this August argued that presidential debates should be "scrapped," with critics suggesting that it's the latest effort by the media to prevent Biden from debating Trump.

Pelosi made the comment at her weekly news conference, unprompted, and her advice was not in response to a question about debates. She cited Trump's "disgraceful" performance at the 2016 debate when he was "stalking" Clinton as one reason Biden should break tradition and sit out the debates.

"So I think that he'll probably act in a way that is beneath the dignity of the presidency; he does that every day," Pelosi said of Trump. "But I think it will also belittle what the debates are supposed to be about. And they're not to be about skullduggery on the part of somebody who has no respect for the office he holds, much less the democratic process.

"Why else would he try to undermine the elections in the manner in which he is doing?" Pelosi continued. "So, if Joe Biden asked me what I thought about it, [I'd say] I don't think that he should dignify that conversation with Donald Trump."

Shortly after Pelosi's comments, the Biden campaign responded that while they agree with the speaker's characterization of Trump, Biden will go through with the debates as planned.

The Biden campaign already agreed in June to three debates in September and October in a letter to the Commission on Presidential Debates, in addition to a vice-presidential debate.

“We certainly agree with Speaker Pelosi on her views of the President's behavior," Biden campaign spokesperson Andrew Bates said. "But just as she has powerfully confronted that behavior in the Oval Office and the Cabinet Room, Joe Biden looks forward to doing the same on the debate stage."

The first debate is scheduled for Sept. 29.