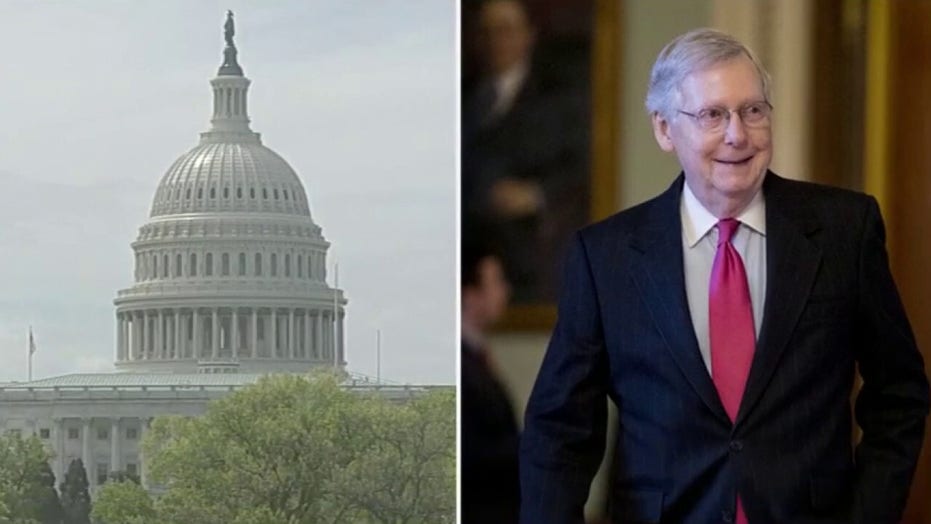 Some lawmakers are expressing worries about protecting themselves and staff when they return to Washington; Chad Pergram reports.

House Speaker Nancy Pelosi, D-Calif., and Senate Majority Leader Mitch McConnell, R-Ky., said Saturday they are turning down a Trump administration offer to implement speedy coronavirus testing at the Capitol, saying the technology should be saved for frontline workers rather than elected officials.

The top two leaders at the Capitol issued a rare joint statement Saturday to "respectfully decline" the rapid testing even though the Capitol will be teeming with lawmakers -- many of whom are elderly -- and staff starting Monday.

“Congress is grateful for the Administration’s generous offer to deploy rapid COVID-19 testing capabilities to Capitol Hill, but we respectfully decline the offer at this time," McConnell and Pelosi said in the statement. "Our country’s testing capacities are continuing to scale up nationwide and Congress wants to keep directing resources to the front-line facilities where they can do the most good the most quickly."

The refusal to accept three new rapid testing machines that President Trump touted could test for COVID-19 in five minutes, quickly drew the ire of the commander-in-chief who blamed "politics" for the decision and insisted there's "plenty of testing" to go around.

The Senate is poised to return to work on Monday. The House was to return, as well, but the session was canceled on the advice of the Attending Physician. Several lawmakers and aides were sick with COVID-19 and there are concerns on both sides of the aisle on how best reopen the Capitol and conduct businesses safely.

The offer for additional help from the Trump administration came as the Capitol’s attending physician advised that coronavirus tests will be available for staffers and lawmakers who are ill, but not enough to proactively test all 100 senators as the chamber comes back in session, Politico reported Thursday.

Dr. Brian Monahan said there is not sufficient capacity to quickly test senators for coronavirus -- in stark contrast with the White House, where people meeting with Trump and Vice President Pence are tested for the disease. The doctor said the test results in the Senate will take two or more days, while the White House has rapid testing, the news outlet reported.

But McConnell and Pelosi said they'll stick with their slower testing processes until the rapid technology is more "widely available" for others.

“Consistent with CDC guidelines, Congress will use the current testing protocols that the Office of the Attending Physician has put in place until these speedier technologies become more widely available," they said.

Governors and many Democratic leaders have been hounding the Trump Administration for more tests and have insisted a ramped-up testing deployment is critical before the country can reopen safely.

Health and Human Services Secretary Alex Azar tweeted Friday the "good news" that the Administration is bringing three new Abbott rapid testing machines to the Capitol and 1,000 tests -- just in time for the Senate to reconvene.

"What about the rest of the country?" Sen. Chuck Schumer, D-N.Y., responded.

Earlier Saturday, Trump tweeted the "5 minute Abbott Test will be used" at the Capitol and called out the Capitol physician.

Meanwhile, there's dismay that Monahan did not distribute guidelines to the Senate until late Friday afternoon on how the Senate would open safely for Monday's session.

The doctor's health and safety rules recommend Senate offices install barriers or cough shields in common areas and also implement motion sensors to open doors. There was also advice about laying out plans for “one-way primary circulation paths to avoid bottlenecks in hallways and passageways where possible.”

There was still debate this week on whether senators should use the subways which trek back and forth between the Capitol to the Senate office buildings. There were also no decisions made on the use of elevators -- especially by older senators who may struggle with steps.

“I don’t know about you, but that’s kind of hard to do on a Friday afternoon,” said one Senate chief of staff, on implementing the last minute changes. “I don’t keep a lot of Plexiglas laying around.”

Senior aides from both sides of the aisle told Fox News that these provisions should have been worked out weeks ago, instead of sent out at the last minute on Friday.

“They knew we were coming back at some point,” one exasperated senior Senate source told Fox News. “These things should have been in place before the decision was made to come back.”