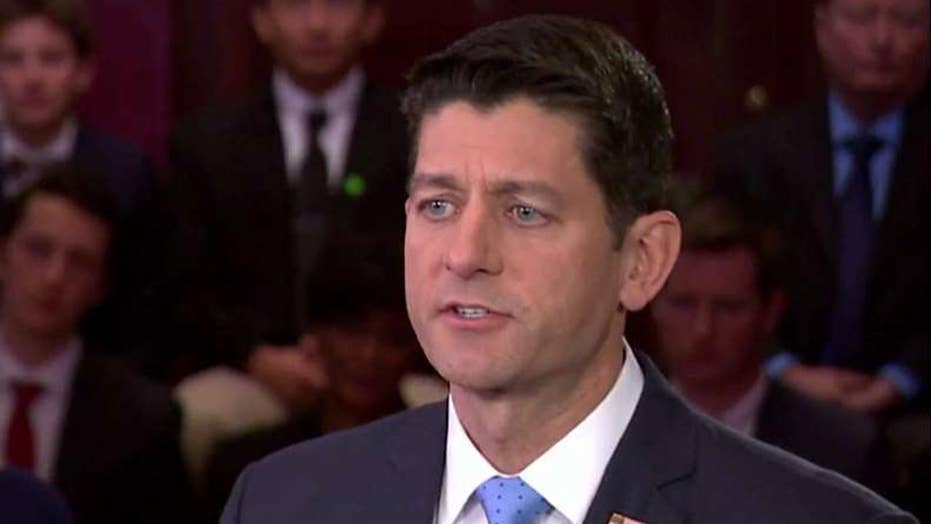 Ryan: Bill designed for those in middle to get biggest break

The House speaker responds to a question from the town hall audience.

House Speaker Paul Ryan is facing conservative pressure to follow the example of Senate Republicans and target ObamaCare’s individual mandate as part of a sweeping tax overhaul – though so far, the GOP leader is showing little appetite for it.

Sen. Orrin Hatch, R-Utah, chairman of the Senate Finance Committee, confirmed late Tuesday he was revising the Senate’s bill to include the repeal of the Affordable Care Act's requirement to buy insurance "to help provide additional relief to low- and middle-income families."

Over on the House side, the steering committee of the conservative Republican Study Committee swiftly endorsed the move and called on the House to follow suit.

“Adding the repeal of the individual mandate to tax reform could be the most consequential step this Congress takes to date in fulfilling our promises to the American people to both reform the tax code and repeal ObamaCare,” the group said in a statement. “…Repealing the individual mandate is the right policy decision. It frees Americans to make their own health care decisions and saves over $300 billion. It appears the Senate is keeping its promises. The House should do the same. Let’s repeal the individual mandate and restart the process of repealing ObamaCare.”

But Ryan, R-Wis., speaking Tuesday at a Fox News town hall, pushed back.

He said Republicans did not include a provision to repeal ObamaCare's individual mandate in the House tax reform bill because "we didn’t want to needlessly complicate" a vote on the measure later this week.

"The House did this already," Ryan told hosts Bret Baier and Martha MacCallum in Herndon, Va. "The House passed our health care bill back in May, which repealed the individual mandate. So, we’re on record in favor of this."

The House is preparing to vote on the tax legislation Thursday, and Ryan is concerned that any changes – especially dealing with the politically perilous issue of ObamaCare – could cost him moderate votes on the floor.

At the same time, Ryan left the door open to the possibility of dealing with the individual mandate in a final version, after the Senate and House vote on their own versions.

“Obviously, we’re in favor of repealing the individual mandate," Ryan said, "but we didn’t want to needlessly complicate the passage of tax reform ... So, we want to see the Senate go first and see if they can get that done and then we’ll discuss whether or not it gets included at the end [in conference]."

The surprise renewal in the Senate of the failed effort to eliminate the health care law's mandate came a day after President Trump renewed pressure on Republican lawmakers to include the repeal in their sweeping legislation to revamp the tax system. It carries high political stakes for Trump, who lacks a major legislative achievement after nearly 10 months in office.

The Finance panel digs into a third day of work on the Senate tax bill on Wednesday. The completed House tax bill, pointed toward a vote in that chamber Thursday, does not currently include repeal of the health insurance mandate. Trump plans an in-person appeal to House Republicans before the vote.

Promoted as needed relief for the middle class, the House and Senate tax overhaul bills would deeply cut corporate rates, double the standard deduction used by most Americans and limit or repeal completely the federal deduction for state and local property, income and sales taxes.

The "ObamaCare" mandate requires most people to buy health insurance coverage or face a fine. Without being forced to get coverage, fewer people would sign up for Medicaid or buy federally subsidized private insurance. Eliminating the mandate in the tax legislation would save an estimated $338 billion over a decade, which could be used to help pay for the deep cuts.

The Congressional Budget Office has estimated that repealing the requirement that people buy health coverage would mean 4 million additional uninsured people by 2019 and 13 million more by 2027.

To win over moderate Senate Republicans to the tax legislation, the Senate may also take up a bipartisan compromise to shore up health care subsidies, Sen. John Thune, R-S.D., indicated Tuesday.

The Senate Finance Committee also has included an amendment proposed by Sens. Dean Heller, R-Nev., and Tim Scott, R-S.C., that would increase the child tax credit to $2,000. Previous versions of the bill increased the credit from the current $1,000 to $1,650. The proposal has received backing, so far, from Sens. Marco Rubio, R-Fla., and Mike Lee, R-Utah, who have led the fight to increase the child tax credit, which has been a top priority for the White House — specifically Ivanka Trump.

“We set out to ensure tax reform would help hardworking American families, and an increased child tax credit will do just that,” Scott said Wednesday.

Fox News’ Brooke Singman and Samuel Chamberlain and The Associated Press contributed to this report.