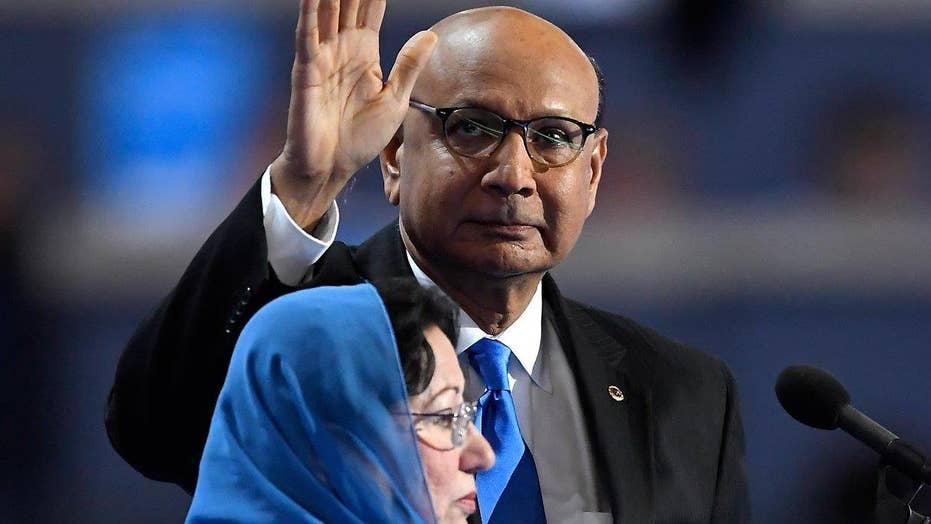 Controversial comments made by Khizr Khan since DNC speech

The Gold Star father who challenged President Trump to rethink his stance on the place of Muslims and people who aren’t Christian in American society during the 2016 presidential race told a crowd on Saturday that Trump was “illiterate and uneducated.”

Khizr Khan spoke to more than 1,000 people at St. Luke’s United Methodist Church in Indianapolis. The title of the event: “Talking Through Unity and Civility with Khizr Khan.”

In reference to Trump’s rollback of the Deferred Action for Childhood Arrivals (DACA) program, according to The Indy Star, Khan said: “It is totally uncompassionate by an illiterate, uneducated president who would cause that harm to the nation and country.”

He added, “Hopefully Congress will address this.”

Khan, a lawyer, was born in Pakistan and moved to the United States with his wife, Ghazala, in 1980. The couple had three sons and they became American citizens in 1986.

Khan’s son was killed in 2004 while serving as a U.S. Army captain in Iraq. Khan came to public attention when he blasted Trump’s stance against immigrants and Muslims in a speech at the Democratic National Convention last summer.

The Trump administration last week officially announced its plan to end DACA — which provides a level of amnesty to certain illegal immigrants who came to the U.S. as children — with a six-month delay for current recipients.

With the delay, the solution for protecting young immigrants from deportation is punted to Congress, with only a few months to pass immigration reform legislation. President Trump urged lawmakers on Tuesday to “do your job” with DACA.

Acting Homeland Security Secretary Elaine Duke said Tuesday that while DACA will be phased out for current recipients, “no new initial requests or associated applications filed after today will be acted on.”