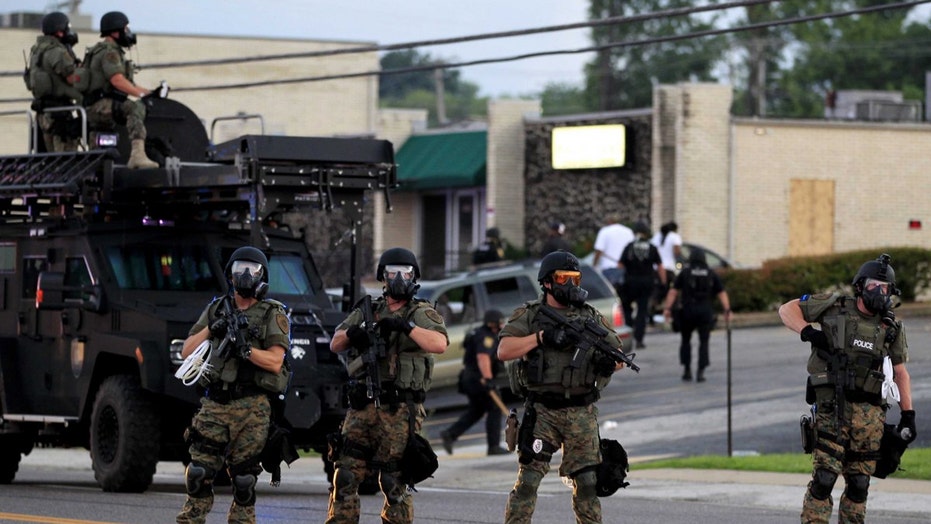 Valuable vehicles and equipment are being yanked from law enforcement agencies across the country by the Obama administration in the wake of the president’s post-Ferguson order -- as sheriffs and lawmakers tell FoxNews.com the equipment is needed, and losing it could put officers and the communities they serve in danger.

“These things are useful tools and the president taking them away will put more officers in jeopardy and at risk of harm or even death. I don’t know how he can sleep at night knowing his actions will have those repercussions,” Rep. Mike Rogers, R-Ala., told FoxNews.com.

President Obama issued Executive Order 13688 in January after the 2014 riots in Ferguson, Mo., amid concerns about the “militarization” of the police fueling a heavy-handed response.

The controversy circled around the 1033 program, set up by the Defense Department in 1997. The program authorizes the Pentagon to send excess military equipment such as armored tracked vehicles, camouflage uniforms and weapons to local law enforcement agencies for no cost. Supporters of the program say it saves money for local agencies, strengthens those agencies and allows the U.S. to get a second use out of existing equipment.

Obama’s order set up a working group to provide recommendations on changes. The group, headed by officials at the Defense Department, Department of Homeland Security and the Department of Justice, then drew up a list of items that would either be controlled or prohibited entirely from being acquired via the 1033 program.

“We’ve seen how militarized gear can sometimes give people a feeling like there’s an occupying force, as opposed to a force that’s part of the community that’s protecting them and serving them. It can alienate and intimidate local residents, and send the wrong message. So we’re going to prohibit some equipment made for the battlefield that is not appropriate for local police departments,” Obama said in May when the report was released.

Items on the prohibited list include armored tracked vehicles, weaponized aircraft and vehicles, .50-caliber firearms and ammo, bayonets, and camouflage.

And now the feds are looking to collect.

A recall of items on the prohibited list that had been handed out via the 1033 program went into effect on Oct. 1, and law enforcement agencies have until April 1, 2016, to return them, a spokeswoman for the Pentagon’s Defense Logistics Agency told FoxNews.com.

Sheriffs using the program are outraged, saying that the main focus of the initial backlash – the armored tracked vehicles – are purely defensive vehicles that save lives in crisis situations, and double as rescue vehicles in areas with rough terrain.

Sheriff Mike Bouchard of Oakland County, Mich., told FoxNews.com of a situation in which an active shooter was holed up in his house shooting out of the windows, hitting nearby homes. Bouchard said they were able to use the vehicle to evacuate residents from houses, while also protecting police officers from being shot. During the siege, over 500 rounds of ammunition were exchanged.

“There’s no question that saved lives,” Bouchard, who is also a former senatorial and gubernatorial candidate, said. “We have letters from people we evacuated saying ‘we don’t know what you could have done to save us without that armored vehicle.'”

Bouchard said the federal government's crackdown on the equipment is an example of the disconnect between Obama’s claims and reality.

“His verbiage calls these tanks. These aren’t tanks. There is no offensive weaponry mounted on a tracked armored vehicle in any police department. These are big safe boxes,” he said.

The vehicles themselves aren’t banned, only those distributed under the 1033 program. However, many counties received their vehicles free-of-charge, and won’t be able to afford to buy one of their own – something they say makes their officers less safe.

“Our agency is not big, we have a total of 130 employees, and we don’t have quarter-of-a-million-dollar budget to buy one,” Sheriff Larry Amerson of Calhoun County, Ala., told FoxNews.com. “The 1033 program gave us the opportunity to get that for free, which was in my view a no brainer.”

Amerson added that in the light of the Paris terror attacks, the president’s order is even more concerning.

“As has been demonstrated in Paris, the potential for those kind of attacks is there, and the response to those attacks in the U.S. will be local law enforcement and whatever resources we have on hand now will be what we can bring to the table if that happens,” he said.

"Sheriffs are very angry. It's a tool in our toolbox being taken away from us."

Sheriff Paul Laney of Cass County, N.D., who also serves on the Board of the National Sheriffs' Association, says that the anger is shared by sheriffs across the country.

“Sheriffs are very angry. It’s a tool in our toolbox being taken away from us based on perception. When we show up with a piece of equipment to save lives  it can’t always look safe and cozy,” Laney told FoxNews.com.

While the armored vehicles are the main focus of the sheriffs' concern, some questioned why other items such as bayonets are being recalled.

Bouchard said that his department had lost 16 bayonets that were used primarily for honor guards, funerals and other ceremonial purposes, but also would be kept in trunks for their use as wire cutters, including cutting the seatbelts of car crash victims.

“No police department charges up the hill with bayonets on their rifles,” he laughed. “Apparently [President Obama] thinks it’s too scary for us to have a big knife."

Bouchard said that the order is self-defeating and that while his county still has one armored vehicle remaining that is allowed (because it has wheels, not tracks) it will force nearby counties that can afford it to go out and buy their own vehicle.

The DLA spokeswoman said the agency is making arrangements to transfer the vehicles to DOD military training ranges to be used as more realistic targets for aviators and ground forces.

Due to the executive order, there is little than can be done immediately at the congressional level. However, Rep. Rogers, who sits on the House Armed Services Committee, told FoxNews.com he is working on next year’s National Defense Authorization Act to try and get the equipment back in the hands of law enforcement in 2016.

Rogers wrote to Obama last week and pledged he would “push the Congress to undo this reckless action.”

However, the president's move has seen continued support from civil rights groups, such as the American Civil Liberties Union (ACLU).

“Through this ban, the president has taken a critical step towards rebuilding trust between police and the people they have pledged to serve," the group said in a statement when the ban was announced in May. "Grenade launchers, high-caliber weapons, armored vehicles – this equipment never belonged in our neighborhoods."