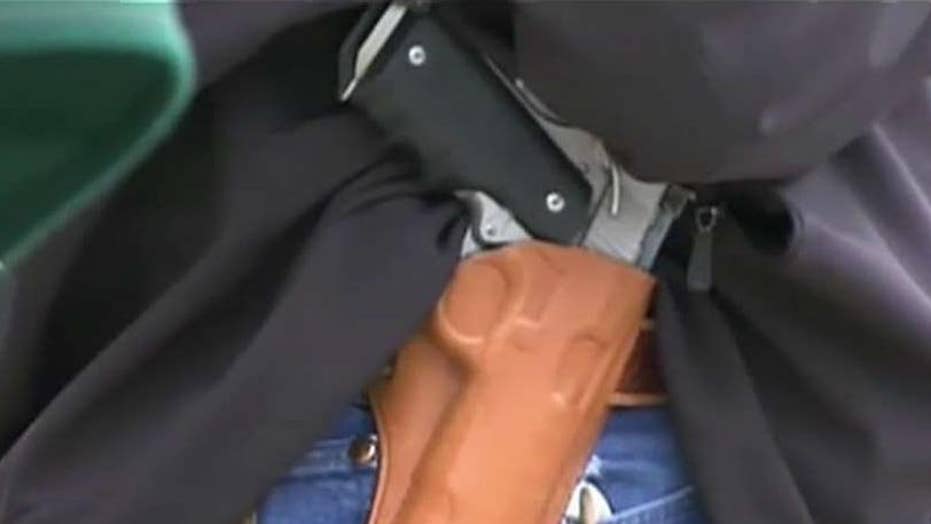 Gun-rights advocates in Texas had a lot to celebrate with the start of 2016. On Jan. 1, the state’s “open-carry” law went into effect allowing licensed gun owners to visibly carry a handgun in most public places.

“It feels great,” said Christopher Carmen Sr., among the first to take advantage of the new law -- enjoying a cup of coffee outside Austin on New Year’s Day with a pistol strapped to his side for all to see. “I want to say that I have more freedom. I just feel safer.”

But the law also is causing some confusion in the law enforcement community, where officers are unclear how far they can go to check licenses.

“What authority [do] the officers have?” asked Kevin Lawrence, executive director of the Texas Municipal Police Association. “We need to get that clarified as much as possible so the officers know what’s expected of them going into any given situation.”

Texas is the 45th state to allow open-carry in some form. Thirty states do not require the carrier to have a license, but Texas is among the 15 states that require a permit. Existing gun owners -- those who previously had concealed-carry permits -- are not required to do anything different. New applicants will have to go through updated training, according to the Texas Department of Public Safety.

Lawrence said his organization isn’t an opponent of the law itself, but is concerned about how it’s enforced. He said the wording of the law when it comes to checking licenses is very vague and leaves officers exposed.

“If a citizen calls in, a business calls in, and says there is someone here carrying a firearm that we’re concerned about -- the question then becomes exactly how much authority does that officer have to approach that individual and investigate whether or not they have a license to carry that gun?” Lawrence said.

In other words, Lawrence told Fox News, if an officer can’t legally ask to see a person’s permit then there’s no way of knowing who is carrying legally. TMPA is the largest law enforcement union in Texas, representing more than 23,000 peace officers around the state.

“Ultimately, we’re going to have to get some rulings out of the courts before we know exactly what the rules are,” Lawrence added.

There are some exceptions to the state’s open-carry law as well. People still may not openly carry handguns at schools, sporting events, bars, voting locations, correctional facilities and secure areas of airports. For private businesses, it’s up to the individual owner.

That leaves business owners with a difficult decision.

If business owners do not want their customers packing heat, they must put up proper signage on the front door.