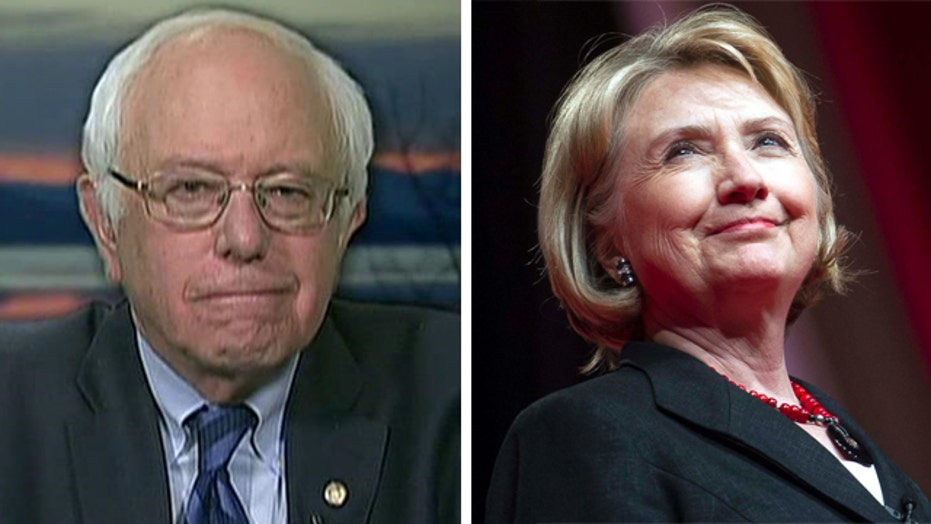 Three potential candidates considered among the most likely to challenge Hillary Clinton’s juggernaut campaign to become the Democratic Party’s 2016 nominee for president expressed confidence Sunday about defeating her, each outlining potential paths to victory.

Sen. Bernie Sanders, Independent-Vermont, questioned whether Clinton or any 2016 GOP presidential candidate would challenge Wall Street for the middle class.

“I do have doubts that Hillary Clinton or any Republican out there will take on big-money interests who control so much of our economy,” he told “Fox News Sunday.” “CEOs should not be making 300 times more than their workers. … What we are seeing over the last 40 years is the disappearance of America’s middle class.”

Sanders, the longest-serving member of Congress, suggested higher taxes for the wealthy and cutting the “enormous waste” at the Pentagon.

Sanders said he would decide “pretty soon” about whether he could raise enough money to mount a “credible campaign.”

“I wouldn’t run unless I thought I could win,” he told Fox News.

"I think we've got a lot of incumbent fatigue in the country,” he said on CNN’s “State of the Union.” “People are looking for fresh approaches in terms of how to solve the problems of the country."

"But what we do have is long experience on the issues, in and out of government; strong beliefs about where the country needs to go," said Webb, a populist-style politician, Vietnam veteran and Navy secretary under the Bush administration.

Webb, who recently visited the first-in-the-nation caucus state Iowa and who will return in the coming days, said only that he was “looking … hard” at officially declaring a candidacy.

“I expect the voters who believe we should have a Democratic primary will get their wish,” she told C-SPAN.

Also on Sunday, former Maryland Democratic Gov. Martin O’Malley, considered perhaps the mostly likely to challenge Clinton, continued to argue that his two terms running the state would qualified him to run the country, if he gets into the race.

And like Sanders, he suggested that improving the economy, particularly middle class wages, would be a top priority.

“I believe I have the ideas that will help our country move forward to where our economy is working again, instead of our wages declining,” O’Malley said on CBS’ “Face the Nation.”

Clinton made a similar argument when officially announcing her candidacy April 11 via an online video in which she says: "Americans have fought their way back from tough economic times, but the deck is still stacked in favor of those at the top.”

O’Malley, a longtime Clinton supporter, argues he can defeat her but has yet to directly challenge Clinton or her campaign or platform.

O’Malley has vowed to decide by late May whether he will make a White House bid. Vice President Biden is among the other top Democrats being mentioned to challenge Clinton.