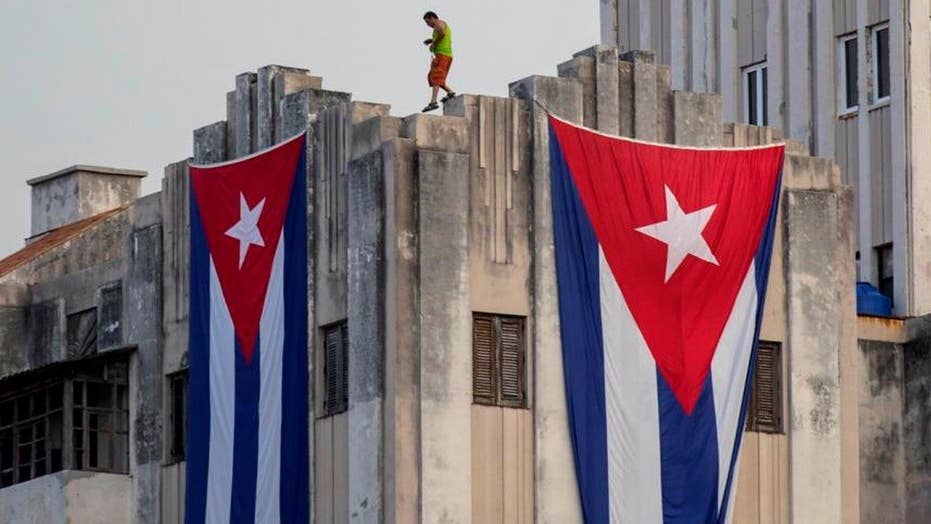 Lessons from Cuba: Why people are seduced by socialism

President Obama’s push to improve relations with Cuba has coincided with an influx of Cuban immigrants into the U.S., statistics show, amid revived talk on Capitol Hill about ending a decades-old law allowing them easy entry to the country.

“We are seeing an influx of Cubans at the Texas-Mexico border who are immediately admitted to this country and have an extremely fast pathway to citizenship,” Texas GOP Rep. Blake Farenthold said in a statement.

Lawmakers suspect the immigrants are flocking to the border out of fear the current immigration policy will be changed, though they can't know for sure.

But the numbers are clear. U.S. Customs and Border Protection documents obtained by FoxNews.com indeed show a spike in Cuban immigrants at U.S. points of entry since Obama announced his diplomatic plan in December 2014.

The number of Cuban immigrants has increased every quarter except for one since the announcement -- from 5,770 in the three months prior, to as many as 14,114 in the fourth quarter of fiscal 2015, roughly 26 months later.

Farenthold, who is working with other Republicans to lift the decades-old law giving Cuban immigrants more favorable treatment, said the current policy is outdated and needs to change.

“With President Obama restoring diplomatic relations with Cuba, the immigration preferential treatment given to Cubans … no longer makes sense,” he said.

Under the the Cuban Adjustment Act of 1966, Cuban nationals can be allowed -- or “paroled” -- into the United States. After one year in the country, they can apply for a green card, or permanent legal residence.

However, they must express fear of returning to Cuba and can enter only if arriving by land and have no criminal record.

The federal government stopped applying that treatment to Cubans arriving by sea after massive flotilla migrations in the 1980 in which many who reached U.S. shores had a history of crime or mental illness.

There is also no cap on the number of Cuban nationals allowed into the country.

Farenthold and fellow Texas Rep. Henry Cuellar, a Democrat, last week proposed legislation that would end such preferential treatment under the law.

“It is the sense of Congress that Cuban nationals should be treated under the same immigration rules as nationals of other countries,” their Correcting Unfair Benefits for Aliens, or CUBA, Act, in part reads.

Texas has 29 ports of entry, the most in the United States, which has contributed to the state having the biggest surge -- especially Cuellar’s home district in Laredo, about 100 miles north of the U.S.-Mexico border.

Customs and Border Protection’s Laredo field office -- with jurisdiction over six ports of entry including the Del Rio/ International Bridge -- handled a total of roughly 44,000 cases of Cuban nationals in fiscal 2014 and 2015, about three times as many as Miami, in second place.

Cuellar calls the 50-year-old immigration law a “relic of a bygone era.”

And he urged Americans after Obama’s historic visit to Cuba earlier this month to remember that thousands of people from Central America and elsewhere also are fleeing from despair, including drug violence, but face a disadvantage when compared with Cubans.

Cuellar and Farenthold’s efforts appear to have the support of Texas GOP Sen. John Cornyn, who has also called for a policy change.

Still, the administration has no plans to change the immigration policy “or seek legislative change,” according to Customs and Border Protection.

“We continue to promote safe, legal and orderly migration from Cuba,” the agency said in a statement.

Cubans began fleeing their country in the 1960s to escape the Castros' oppressive, communist regime. The recent exodus is largely driven by poverty and lack of economic opportunity.

Lawmakers and other officials have tried before to repeal the 1966 law, in no small part because it also offers Cuban immigrants some federal welfare benefits.

The advantages for Cubans, compared to other Latin Americans, came to light again in 2014 when thousands of families from El Salvador, Guatemala and Honduras arrived at the southern U.S. border to escape drug-trade violence and other problems.

“We’ve been calling for a repeal of the law for years,” Ira Mehlman, a spokesman for the Federation for American Immigration Reform, said this week.

“It has never achieved its objective. All it has done is drain the dissidents from Cuba where they might have effected change. ... It’s time for Cuba to have the same immigration policy as the rest of the world.”