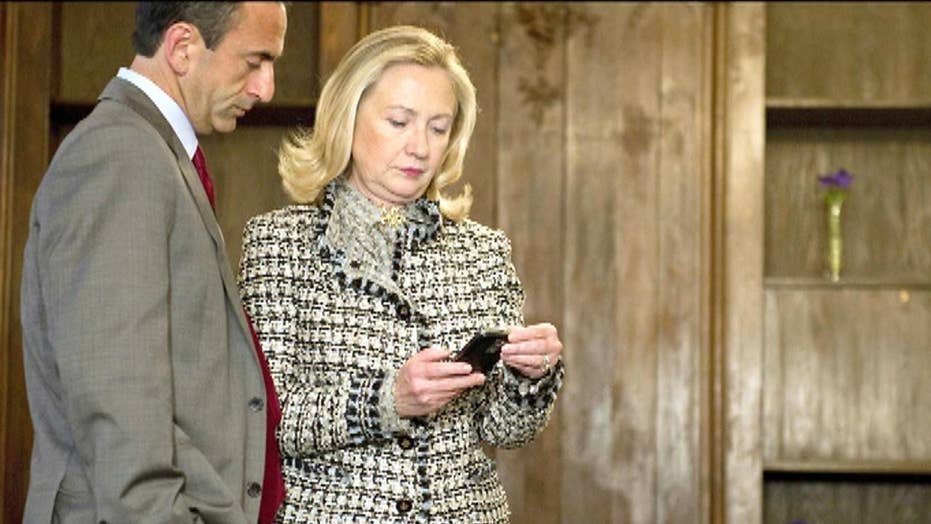 EXCLUSIVE: The intelligence community has deemed some of Hillary Clinton’s emails “too damaging" to national security to release under any circumstances, according to a U.S. government official close to the ongoing review. A second source, who was not authorized to speak on the record, backed up the finding.

The determination was first reported by Fox News, hours before the State Department formally announced Friday that seven email chains, found in 22 documents, will be withheld “in full” because they, in fact, contain “Top Secret” information.

The State Department, when first contacted by Fox News about withholding such emails Friday morning, did not dispute the reporting – but did not comment in detail. After a version of this report was first published, the Obama administration confirmed to the Associated Press that the seven email chains would be withheld. The department has since confirmed those details publicly.

The decision to withhold the documents in full, and not provide even a partial release with redactions, further undercuts claims by the State Department and the Clinton campaign that none of the intelligence in the emails was classified when it hit Clinton's personal server.

Fox News is told the emails include intelligence from "special access programs," or SAP, which is considered beyond “Top Secret.” A Jan. 14 letter, first reported by Fox News, from intelligence community Inspector General Charles McCullough III notified senior intelligence and foreign relations committee leaders that "several dozen emails containing classified information” were determined to be “at the CONFIDENTIAL, SECRET, AND TOP SECRET/SAP levels."

The State Department is trying to finish its review and public release of thousands of Clinton emails, as the Democratic presidential primary contests get underway in early February.

Under the Freedom of Information Act, or FOIA, there is an exemption that allows for highly sensitive, and in this case classified, material to be withheld in full -- which means nothing would be released in these cases, not even heavily redacted versions, which has been standard practice with the 1,340 such emails made public so far by the State Department.

According to the Justice Department FOIA website, exemption “B3” allows a carve-out for both the CIA and NSA to withhold "operational files." Similar provisions also apply to other agencies.

Fox News reported Friday that at least one Clinton email contained information identified as "HCS-O," which is the code for intelligence from human spying.

One source, not authorized to speak on the record, suggested the intelligence agencies are operating on the assumption there are more copies of the Clinton emails out there, and even releasing a partial email would provide enough clues to trace back to the original – which could allow the identification of “special access programs” intelligence.

The State Department was scheduled to release more Clinton emails Friday, while asking a D.C. federal court for an extension.

FBI investigators looking into the emails are focused on the criminal code pertaining to “gross negligence” in the handling and storage of classified information, and “public corruption.”

“The documents alone in and of themselves set forth a set of compelling, articulable facts that statutes relating to espionage have been violated,” a former senior federal law enforcement officer said. The source said the ongoing investigation along the corruption track “also stems from her tenure of secretary. These charges would be inseparable from the other charges in as much as there is potential for significant overlap and correlation."

Based on federal regulations, once classified information is spilled onto a personal computer or device, as was the case with Clinton and her aides, the hardware is now considered classified at the highest classification level of the materials received.

While criticized by the Clinton campaign, McCullough, an Obama administration appointee, was relaying the conclusion of two intelligence agencies in his letter to Congress that the information was classified when it hit Clinton’s server -- and not his own judgment.

Joseph E. Schmitz, a former inspector general of the Department of Defense, called the attacks on McCullough a “shoot the watchdog” tactic by Clinton’s campaign.

The developments, taken together, show Clinton finding herself once again at the epicenter of a controversy over incomplete records.

During her time as the first female partner at the Rose Law firm in Arkansas during the mid-1980s, she was known as one of the “three amigos” and close with partners Webb Hubbell and Vince Foster. Hubbell ended up a convicted felon for his role in the failure of the corrupt Madison Guaranty, a savings and loan which cost taxpayers more than $65 million. Hubbell embezzled more than a half-million dollars from the firm.

Foster killed himself in Washington, D.C., in July 1993. As Clinton’s partner in the Rose Law firm, he had followed the Clintons into the White House where he served as the Clintons’ personal lawyer and a White House deputy counsel.

Clinton’s missing Rose Law billing records for her work for Guaranty during the mid-1980s were the subject of three intense federal investigations over two years. Those records, in the form of a computerized printout of her work performed on behalf of Guaranty, were discovered under mysterious circumstances in the Book Room of the private White House living quarters.

The discovery of those records was announced during a  blizzard in January 1996 by attorney David Kendall, who still represents Hillary Clinton. After Clinton testified before a grand jury, prosecutors concluded there was insufficient evidence to prove beyond a reasonable doubt she committed perjury or obstruction of justice.

Despite Clinton’s recent public statements about not knowing how the technology works, at least one email suggests she directed a subordinate to work around the rules. In a June 2011 email to aide Jake Sullivan, she instructed him to take what appeared to be classified talking points, and "turn into nonpaper w no identifying heading and send nonsecure."

A State Department spokesman could not say whether such a fax was sent.