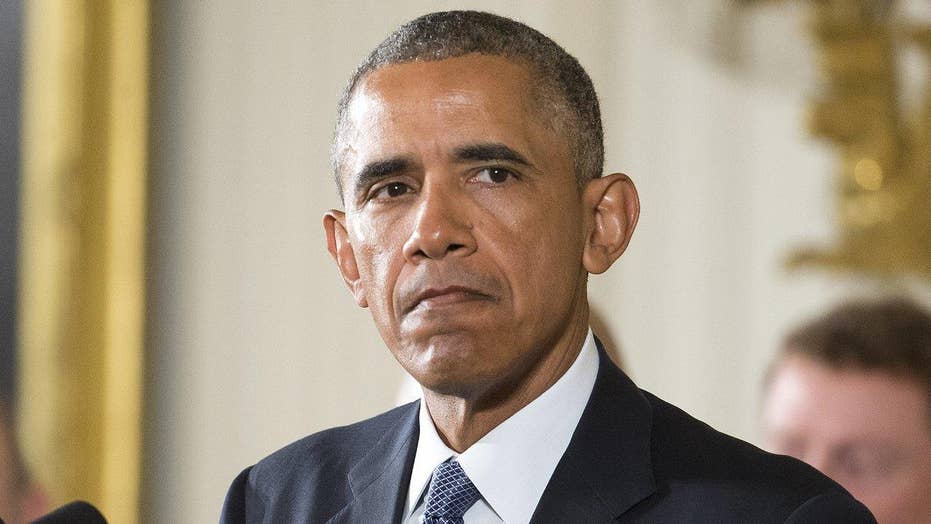 President Obama’s executive action to expand gun sale background checks has opened up a legal can of worms, specifically the president’s bid to broaden the definition of who’s a dealer -- and therefore must get a license and conduct background checks.

Under current federal law passed by Congress, only federally licensed dealers must conduct background checks on buyers. The law does not specify whether this applies to online sales and other areas -- so those selling or trading guns on websites or in informal settings such as flea markets often don’t register.

As the centerpiece of Obama's new gun push, the Bureau of Alcohol, Tobacco, Firearms and Explosives on Monday night issued updated guidance that now deems anyone “in the business” of selling guns a dealer, regardless of where they sell.

All of which puts a constitutional spotlight on Obama’s actions, raising questions of interpretation that may have to be settled by the courts.

“Mr. Obama will now require that anyone who sells a gun, that is even an 'occasional' seller, will be required to perform a background check. By defining what an 'occasional seller' is, the president is essentially interpreting the law, a job reserved for the courts,” Judge Andrew Napolitano, Fox News' senior judicial analyst, said in a FoxNews.com opinion piece.

Until the courts weigh in, it falls on the sellers to figure out who technically is "in the business" of dealing.

It's a tough question -- and one with serious implications. As Obama noted during remarks at the White House Tuesday, failure to follow these rules can result in criminal prosecution.

While the new guidance says collectors and gun hobbyists are largely exempt, the exact definition of who must register and conduct background checks is vague. Some officials suggested that selling just one or two firearms could subject a seller to these rules.

Philip Dacey, president of the Pennsylvania Gun Collectors Association, told FoxNews.com that while he thinks the new orders will not have a huge impact on collectors, the devil is in the details.

"I think [to require a license for] one or two guns would be ridiculous, and how will you enforce it? If there’s no paperwork trail, how would you know when people are selling one or two guns to their neighbor?" Dacey said.

Dacey also noted that getting a federal license could take over three months and entail a complex process involving fingerprints, photographs and a visit by ATF agents.

The guidance says determining whether someone is “engaged in the business” of dealing requires looking at "the specific facts and circumstances of your activities.”

“As a general rule, you will need a license if you repetitively buy and sell firearms with the principal motive of making a profit. In contrast, if you only make occasional sales of firearms from your personal collection, you do not need to be licensed,” the guidance says.

However, the document also notes the courts have deemed people dealers in some cases even if they only sell a couple guns.

“Note that while quantity and frequency of sales are relevant indicators, courts have upheld convictions for dealing without a license when as few as two firearms were sold, or when only one or two transactions took place, when other factors were also present,” the guidance says.

“ATF will make clear that whether you are ‘engaged in the business’ depends on the facts and circumstances,” Jarrett said, according to The Washington Free Beacon. “On factors such as: whether you represent yourself as a dealer, such as making business cards or taking credit card statements. Whether you sell firearms shortly after they’re acquired or whether you buy or sell in the original packaging.”

On the question of the number of guns sold, Lynch said: “It can be as few as one or two depending upon the circumstances under which the person sells the gun."

Adding to the questions, the background check provision rests in the murky realm of agency "guidelines," which carry less weight than formally issued federal regulations and can easily be rescinded.

Republicans blasted the new guidance as a form of intimidation that would only target law-abiding citizens.

“[Obama] knows full well that the law already says that people who make their living selling firearms must be licensed, regardless of venue,” said House Speaker Paul Ryan, R-Wis., in a statement. “Still, rather than focus on criminals and terrorists, he goes after the most law-abiding of citizens. His words and actions amount to a form of intimidation that undermines liberty.”