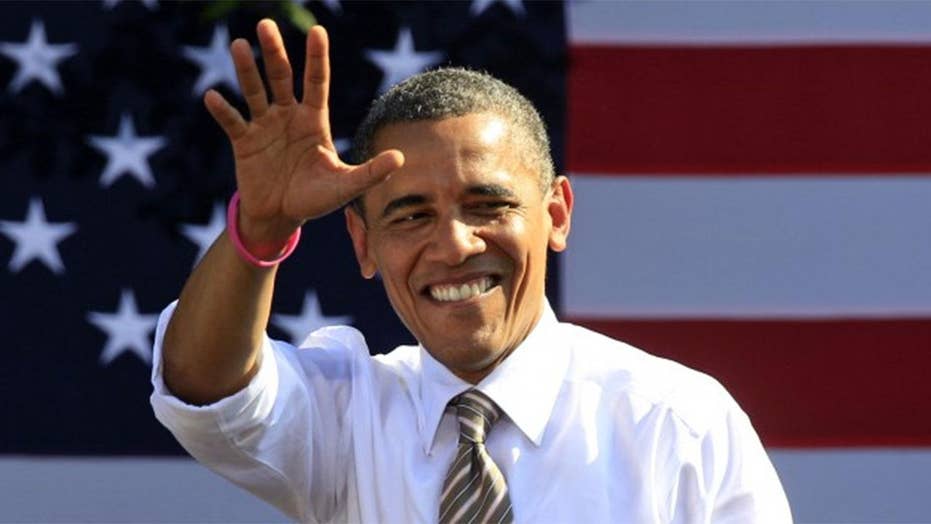 What message will Obama bring as he campaigns for Democratic midterm candidates? Former Obama adviser David Tafuri and Fox News contributor Marc Thiessen weigh in on 'The Story.'

Former President Barack Obama is set to return to the campaign trail this weekend, stumping for a slew of U.S. House hopefuls in California -- including philanthropist Gil Cisneros, who has been accused of sexual misconduct.

Since leaving the White House in January 2017, Obama has made only occasional appearances in behalf of candidates, usually opting instead to issue endorsements.

In addition to Cisneros in the 39th District, Obama is scheduled to campaign for Josh Harder in the 10th, T.J. Cox in the 21st, Katie Hill in the 25th, Katie Porter in the 45th, Harley Rouda in the 48th and Mike Levin in the 49th, Roll Call reported.

The seven Democratic congressional hopefuls are running in districts currently occupied by Republicans, though the state voted overwhelmingly for Hillary Clinton in 2016.

Former first lady Michelle Obama, meanwhile, will be pushing for voter registration this month as the 2018 midterm elections approach.

Gil Cisneros, a U.S. Congress hopeful in California, denied the allegations of sexual harassment raised by a fellow Democrat. (Cisneros for Congress)

Yet Obama’s backing of Cisneros, who’s running against Republican Young Kim, raises concerns in the light of the #MeToo era. The former president initially snubbed Cisneros and didn’t endorse him, for reasons that remain unclear, though likely are related to the allegations against the candidate.

Democratic activist and documentary filmmaker Melissa Fazli, who ran an unsuccessful primary ampaign for a state Assembly seat in California, accused Cisneros of propositioning to her during the California Democratic Party Convention in San Diego in February.

Fazli accused Cisneros of seeming intoxicated during a conversation in an elevator about donations to her campaign, then asking her, “Should we go back to your room?”

Fazli claims she spoke with Cisneros over the phone again regarding the donations. Cisneros allegedly asked her, “What are you going to do for me?” in a suggestive manner.

“I know there will be skeptics and people who will publicly flog me for coming forward, but I thought it was necessary to let people know what kind of man is Gil Cisneros, an unethical creepy man who is using inappropriate and bullying tactics to intimate others in order win a seat in Congress,” she added.

Citing the accusations agaisnt Cisneros, a Republican group has released an ad that asserts the candidate's “time’s up.”

“Gil Cisneros thinks the rules don’t apply to him,” said Courtney Alexander, communications director of the Congressional Leadership Fund, a super PAC that works to get Republicans elected to the House. “Gil Cisneros has been accused of sexually harassing a fellow California Democrat, inviting himself to her hotel room and demanding sex in exchange for campaign funds. California voters deserve better than Gil Cisneros.”

Multiple Democrats, though all of them opposed Cisneros in the Democratic primary, have also urged the party to investigate the claims. Two independent candidates also expressed “solidarity” with Fazli.

“Sexual harassment is an epidemic that runs rampant across our political system, no matter which side of the aisle,” said Shaunna Thomas, co-founder of the group. “If the DCCC truly wants to claim to promote candidates who are champions for women, it must have a zero tolerance policy for sexists in its ranks, and immediately withdraw its support of Cisneros and remove him from the party’s ‘Red to Blue’ program.”

"[The DCCC] must have a zero tolerance policy for sexists in its ranks, and immediately withdraw its support of Cisneros and remove him from the party’s ‘Red to Blue’ program."

The Cisneros campaign, meanwhile, accused the woman of spreading false allegations against the candidate.

“Fazli falsely claims she and Cisneros had an ‘inappropriate encounter’ in an elevator around the ‘11pm hour’ at the San Diego Bayfront Hotel. She alleges Cisneros was intoxicated and propositioned her,” the statement from the campaign reads.

“The interaction between Cisneros and Fazli was witnessed by Thomas Rivera. Rivera confirms Cisneros’s account that he was neither intoxicated nor did he proposition Fazli,” the statement added, though without acknowledging that Rivera is a campaign staffer for Cisneros.

"The interaction between Cisneros and Fazli was witnessed by Thomas Rivera. Rivera confirms Cisneros’s account that he was neither intoxicated nor did he proposition Fazli."

“Fazli asked Cisneros for a campaign donation to which he declined. In addition, multiple individuals interacted with Cisneros as he was headed to, and throughout the SEIU United Healthcare Workers event, all who report Cisneros being lucid and sober,” the statement added.

The campaign also said that multiple eyewitnesses can confirm that Cisneros wasn’t intoxicated and his whereabouts were different from what the accuser alleged.